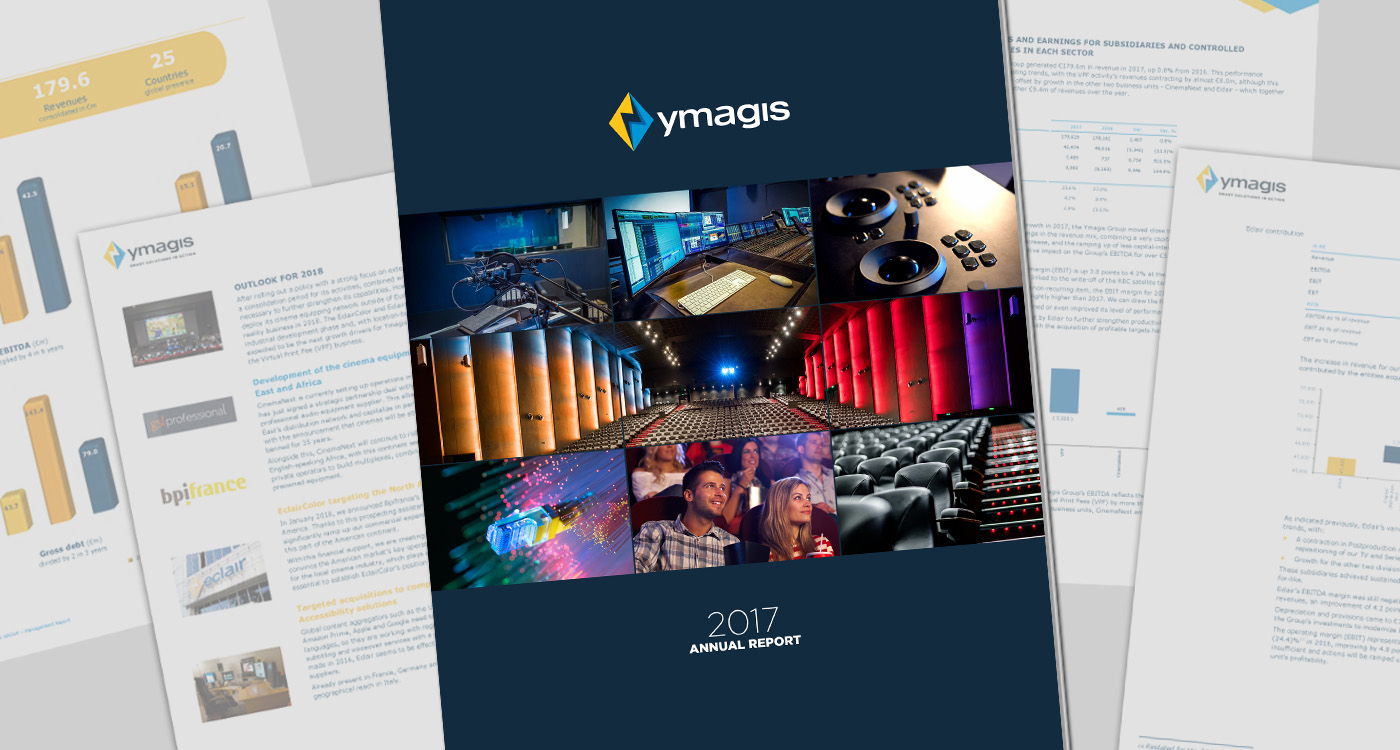 Ymagis Group (FR0011471291, MAGIS, PEA-PME), the European specialist in digital technologies for the cinema industry, announced the implementation by its Board of Directors of its financial restructuring plan during its meeting held today. The Company announces in parallel the appointment of Thierry Lescasse as Group Executive Vice President, Finance, succeeding Benoît Jacheet, whose transition mission concluded with the completion of the financial restructuring plan. Ymagis also reports on the impact of the COVID-19 crisis on the Group.

Implementation of the financial restructuring plan, issue of ORAR and share purchase warrants on 31 March 2020
Ymagis S.A. reiterates that the Company and its bank creditors and bondholders concluded a conciliation protocol on 2 December 2019, overseen by Maître Jonathan El Baze in his capacity as Conciliator, and under the aegis of the CIRI, whose purpose is the restructuring of its financial debt (the “Restructuring Agreement”). The resolutions related to the restructuring plan were later approved unanimously at the Extraordinary Shareholders’ Meeting held on 19 February 2020.

(A) In light of the time required for the fulfillment of the conditions, the Parties signed, on 13 March 2020, an addendum to the Restructuring Agreement to (i) waive the condition precedent linked to the definitive nature of the approval of the Protocol by the Paris Commercial Court, and (ii) extend the deadline for the entry into force of the Protocol from 15 March to 31 March 2020 (“Amendment No. 1”).

This judicial finding enabled the Board of Directors of the Company, which met on 27 March, to note the lifting of the condition precedent of the entry into force of the Restructuring Agreement and to authorize its implementation. The main features of the Restructuring Agreement are described in the press release published by the Company on 2 December 2019.

The Board of Directors has notably decided on:

– The issue of 9,163 convertible bonds redeemable in new or existing ordinary shares of the Company or redeemable by the Company (the “ORARs”) with a nominal value of €1,000 each;
– The free allocation to ordinary Company shareholders of share purchase warrants exercisable until 30 June 2024 justifying an account entry the day before the Board of Directors’ meeting lifting of all the conditions precedent to the implementation of the Conciliation Protocol, i.e. 26 March 2020, the list of which will be determined by Euroclear.

Thierry Lescasse brings with him in-depth knowledge of and experience in the financial sector, having previously served as a financial auditor, Chief Financial Officer of small and mid-sized listed and non-listed companies, and as an entrepreneur.

He began his career as a M&A financial auditor at EY, before becoming a financial controller at Imerys. For the past 20 years, he has led financial and managerial missions within small and mid-sized international services and industry groups, specializing in financial transition and transformation operations. Mr. Lescasse is experienced in the financial directorship of listed companies, notably Assystem and Valtech. As an entrepreneur, he co-founded and managed the Maisons de Famille group of high-end retirement homes and has invested in several start-ups.

Thierry Lescasse, 61, has a master’s degree in management from Paris X Nanterre University and is a certified chartered accountant.

COVID-19 Crisis Impact
Finally, Ymagis indicates that the 2020 figures included in its 2 December 2019 press release will not be reached in 2020 due to the COVID-19 pandemic. With most countries around the world having decided to close all public places, including cinemas, this period is expected to have a significant impact, both directly and indirectly, on the Group’s revenue and earnings throughout 2020. Given this situation, Ymagis intends to make use of all the systems put in place by the public powers in France, as in the other countries where the Group has a foothold, to allow it to minimize the impact of this crisis and guarantee the continuity of the Group’s business activities. A more precise state of affairs will be drawn up in several weeks, at the conclusion of this exceptional crisis.

Jean Mizrahi, Ymagis Group President and CEO, states: “We are preparing to face an entirely new economic climate as a result of the COVID-19 pendemic, which is severely impacting the cinema sector, as with many other segments of the global economy. In this context, the completion of the transactions provided for in our agreements with our financial partners will allow us to go into this period with a much more solid financial standing. With Benoît Jacheet’s transition management mission coming to an end, the arrival of Thierry Lescasse, whose solid experience will be of great benefit to the Group, will help us meet the challenges that will arise in the coming weeks. I would like to thank Benoît for the crucial work he carried out during the past year, which has enabled us to take this decisive next step. I trust in the commitment and courage of the Group’s employees and the CinemaNext, Eclair and Illucity subsidiaries to face the coming months with the same solidarity they showed during an already difficult period for the Group this past year. Together, we will be able to get through this crisis and pursue our policy of innovation, creativity and daring.”