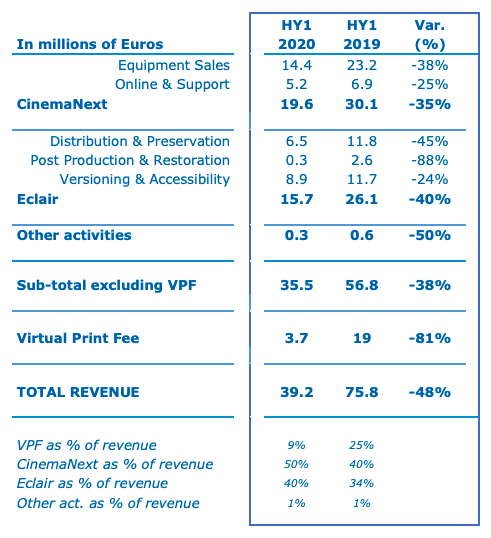 Ymagis Group (FR0011471291, MAGIS, PEA-PME, TECH 40), the European specialist in digital technologies for the cinema industry, today reported its consolidated financial revenue for the first six months of 2020, ending 30 June, and provided an update on the receivership proceedings currently underway.

Half-year 2020 revenue strongly impacted by the health crisis
Ymagis Group’s revenue is down 48% in the first half of 2020, mainly due to the impact of the global pandemic as well as the anticipated decline in VPF activity.

All of the Group’s businesses have been negatively impacted by the consequences of the COVID-19 crisis, which led to the closure of virtually all cinemas in the world for several months. In total, the Group’s revenue was nearly halved between the first six months of 2019 and the first six months of 2020, the impact being more acute in conjunction with the expected decline in VPF activity.

Overall, non-VPF activities fell by 38% year-on-year (-34% on a like-for-like basis taking into account the sale of Eclair Cinema), which will have a significant negative impact on the Group’s earnings in the first half of 2020.

This exceptional situation, in a context in which the banks refused to lend the Group the assistance that would have enabled it to come through this difficult period while maintaining a sufficient cash level, led Ymagis to decide to declare the suspension of payments, with the Commercial Court of Paris placing Ymagis SA and
several of its French subsidiaries in receivership on 30 June 2020.

Update on receivership proceedings
The company Ymagis SA having been placed in receivership on 30 June 2020, the two administrators appointed by the Commercial Court of Paris, Maître Jonathan El Baze and Maître Carole Martinez, published in the French newspaper “Les Échos” on 3 July 2020 a call for tenders to present a takeover plan for Ymagis and those of its subsidiaries also placed in receivership.

The deadline for the call for tenders was initially set for 17 July 2020, which was then extended by two weeks to 31 July.

The call for tenders has been closed since that date.

The call for tenders resulted in several offers for the total or partial takeover of Ymagis SA and/or some of its subsidiaries. None of the offers include the acquisition of the Group’s financial securities.

The Commercial Court of Paris is expected to rule on these offers in the first half of September.

During the hearing to be set, the court will have to rule on the offers received and decide on the transfer of the assets as part of a transfer of assets plan or, failing that, a judicial liquidation. In the unlikely latter case, the process will lead to the existence of a liquidation surplus attributable to shareholders.