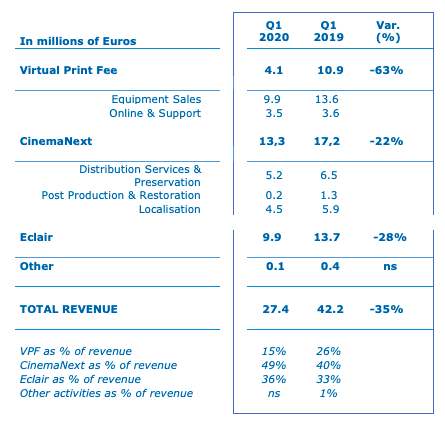 Ymagis Group’s revenue was down 35% at €27.4m in Q1 2020 compared to Q1 2019. This decline is due to both the continued scheduled decrease in VPF activity (-63% at € 4.1m) and the closure of the majority of cinemas around the world as a result of the COVID-19 pandemic. The global health crisis put an abrupt halt in March to the Group’s business activities which had regained a solid growth dynamic in 2019: the CinemaNext business unit’s earnings thus fell by 28% to €5.2m and Eclair’s Distribution and Preservation activities were down by 20% at €5.2m. The Eclair business unit as a whole recorded earnings of €9.9m, down 28% from the prior year period due in part to the deconsolidation of Eclair Cinema, which was sold at the start of the year.

The VPF BU continued to decrease, as scheduled, with revenue down by 63% during the first quarter of 2020 at €4.1m. It also suffered the consequences of the COVID-19 crisis, with distributors ceasing to program films, which generate VPF revenue, in the first half of March.

CinemaNext sales, which were up 22% in 2019, fell 22% in the first quarter of 2020, to € 13.3m. This decline is the direct result of the closure of cinemas on a global level, which began in March in Europe, as well as the temporary suspension of construction on cinema newbuilds.

The Eclair business unit’s revenues were also impacted (-28% to €9.9m), in particular its theatrical services activities which were directly affected by containment measures, but also its other activities, the crisis having had an effect on all sectors of the industry. Added to this are the effects of a change in scope following the sale of Eclair Cinema.

The new activities (mainly Illucity) recorded revenue of €0.1m over the quarter.

Financial Situation and Business Development Outlooks
The industry fundamentals remain unchanged: cinemas retain the same appeal for the public and, as a result, the need for quality films is greater than ever. We have seen a strong and immediate mobilization of audiences in countries in which cinemas have reopened, such as in Denmark. Once the sector has started up again, the role of Ymagis Group’s companies within the film industry will be as important as ever, thanks to its technologies, its expertise, its market shares, and to the successful restructuring of its debt just prior to the pandemic outbreak.

Ymagis however has an urgent need for financing, estimated at around €16m, to enable it to cope with the effects of the health crisis.

The Group’s banking institutions in France have not yet responded favorably to a request to grant Ymagis State guaranteed loans. However, these loans are 90% guaranteed by the public authorities, leaving the banks with a low residual risk, the principal representing less than 5% of the total interest paid by the Group to the banks for ten years. Ymagis has thus appealed to the French government to obtain the financing it needs to get through the current crisis. Discussions to this end are ongoing but, in the absence of a swift conclusion, Ymagis will have no other alternative than to request the opening of a safeguard procedure, which could impact the sustainability of the Group and adversely affect its 750 employees.

Ymagis is listed on Euronext Paris and is part of the CAC Small, CAC Mid and Small and CAC All-Tradable indices.