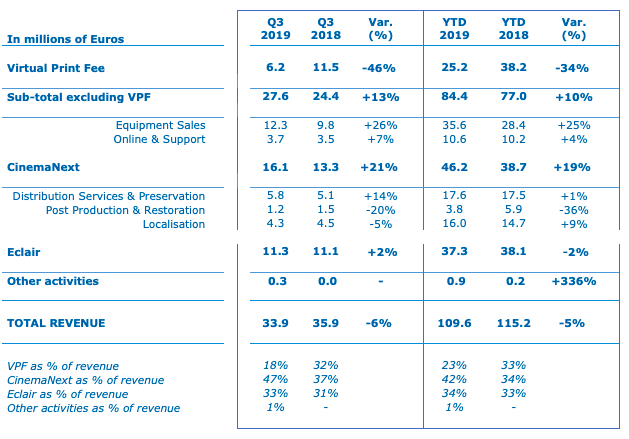 Confirmation of first half-year trends
Ymagis Group’s revenue in the third quarter confirms the first half year trends:
– The dynamism of the CinemaNext BU (+21% at €16.1m) buoyed by the gradual deployment of equipment renewal contracts
– The stability of Eclair’s activities through an upturn in Distribution and Preservation activities (+14% at €5.8m) which offsets the scheduled decline in “Post production and Restoration” activities (-20% at €1.2m)
– The ongoing scheduled reduction in VPF revenue (-46% at €6.2m)

CinemaNext’s sales at the end of September increased by 19%, standing at €46.2m. The third quarter (+21% at €16.1m) included the first revenues from equipment renewal contracts signed this year with cinema exhibitors such as Austrian chain Cineplexx, France’s Megarama and Irish operator Omniplex. Deployment of these contracts is scheduled to last approximately two years.

Revenue for the Eclair BU (-2% for the first nine months at €37.3m) reflects the scheduled drop in its creative services (Post production and Restoration) and the dynamism of the Versioning and Accessibility activities. Q3 was marked by the upturn in Distribution and Preservation activities (+11% at €5.6m) plus the €0.2m in revenues generated by Orfeo, integrated since 28 June, for a total of €5.8m for this activity during the quarter.

It should be noted that revenue for Eclair Cinema SAS, the sale of which to L’Image Retrouvée was announced in September, remains consolidated in the “Post production & Restoration” activity until the company’s continuation plan, to be presented by the purchaser, has been approved by the Commercial Court of Nanterre.

The Group’s new activities are gradually gaining strength, generating €0.9m in revenue during the first nine months and €0.3 during the quarter, driven by the progressive deployment of VR activities. Three new Illucity centres opened in October, in Marseille (owned and operated) as well as in Athens and Liège (as part of partnerships).

Ongoing negotiations regarding the debt
Ymagis reiterates that the continuity of its operations remains subject to the ongoing renegotiation of the company’s debt with its creditors.