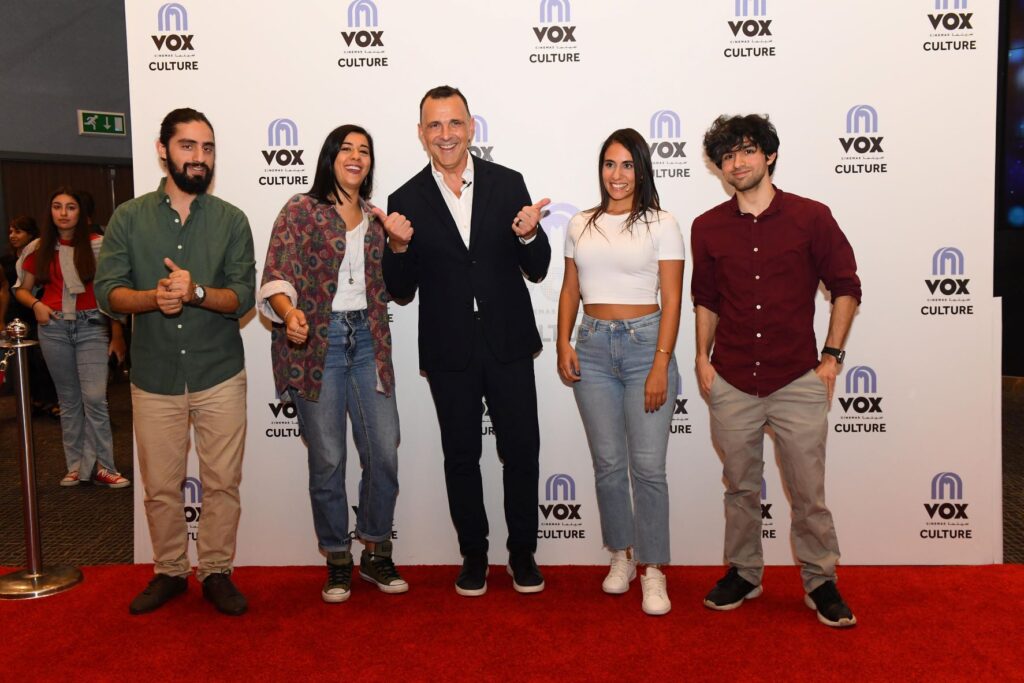 VOX Cinemas, the dedicated cinema arm of Majid Al Futtaim, is proud to launch VOX Culture, which provides audiences with greater access to the wealth of local creativity and culture within Lebanon. As part of the new initiative, VOX Cinemas’ auditoriums will provide a platform for a diverse range of multidisciplinary curated events including stand-up comedy, live theatre, concerts, and screenings to appeal to all ages.

To celebrate the launch, VOX Cinemas in Beirut hosted a Fireside Chat with Ignace Lahoud, Chief Executive Officer, Majid Al Futtaim Leisure, Entertainment & Cinemas before local comedians Jessica Maghamess, Yorgo Kmeid, Jalal Achkar and Tera Irani took to the stage to entertain the crowd. VOX Culture builds on VOX Cinemas’ commitment to innovate and diversify its offering with alternate content, give back to the communities in which it operates and champion local creative talent.

“VOX Cinemas believes that the cinema is more than just a place to watch a movie and plays a key role in bringing communities together and enhancing cultural life. Throughout the pandemic and economic crisis, we witnessed the vital social value of cinema, which provided an inclusive space for the people of Lebanon to enjoy shared experiences together. VOX Culture was established from our desire to champion the arts, be part of the cultural scene in Lebanon and make a positive impact in the local community. We look forward to building on the momentum and establishing VOX Culture as a signature programme that we can roll out across other markets in the future”, said Ignace Lahoud, Chief Executive Officer, Majid Al Futtaim, Leisure, Entertainment & Cinemas.

Since 2013, VOX Cinemas has been bringing the magic of movie to Beirut. With the introduction of VOX Culture, audiences can expect a variety of new offerings including VOX Bites; a short-film competition dedicated to students, VOX Talks; a series of masterclasses for up-and-coming talent to learn from professionals from the world of film and theatre, VOX Talent; a platform for people to showcase their creativity and VOX Comedy; a platform giving comedians the opportunity to perform.

VOX Cinemas is the region’s largest exhibitor, operating more than 600 screens across eight markets in the Middle East. An avid supporter of the film industry, it also operates a large regional film distribution business and content production company, which is dedicated to producing premium Arabic content that resonates with both local and international audiences. For more information about VOX Cinemas visit voxcinemas.com or the VOX Cinemas app.

A remarkable business success story, Majid Al Futtaim started from one man’s vision to transform the face of shopping, entertainment and leisure to ‘create great moments for everyone, every day’. It has since grown into one of the United Arab Emirates’ most respected and successful businesses, spanning 17 international markets, employing more than 43,000 people, and obtaining the highest credit rating (BBB) among privately-held corporates in the region.

Majid Al Futtaim owns and operates 29 shopping malls, 13 hotels and four mixed-use communities, with further developments underway in the region. The shopping malls portfolio includes Mall of the Emirates, Mall of Egypt, Mall of Oman, City Centre malls, My City Centre neighbourhood centres and five community malls, which are in joint venture with the Government of Sharjah. The Company is the exclusive franchisee for Carrefour in over 30 markets across the Middle East, Africa and Asia, operating a portfolio of more than 375 outlets including City+, the region’s first chec inikout-free store, and an online store. Majid Al Futtaim operates more than 600 VOX Cinemas screens, as well as a portfolio of world-class leisure and entertainment experiences across the region, including Ski Dubai, Ski Egypt, Dreamscape, Magic Planet, Little Explorers and iFLY Dubai. The Company is parent to a Fashion, Home and Specialty retail business, representing international brands such as Abercrombie & Fitch, Hollister, AllSaints, lululemon athletica, Crate & Barrel, and THAT, a Majid Al Futtaim fashion concept store and app. In addition, Majid Al Futtaim operates Enova, a facility and energy management company, through a joint venture operation with Veolia, a global leader in optimised environment resource management.
www.majidalfuttaim.com