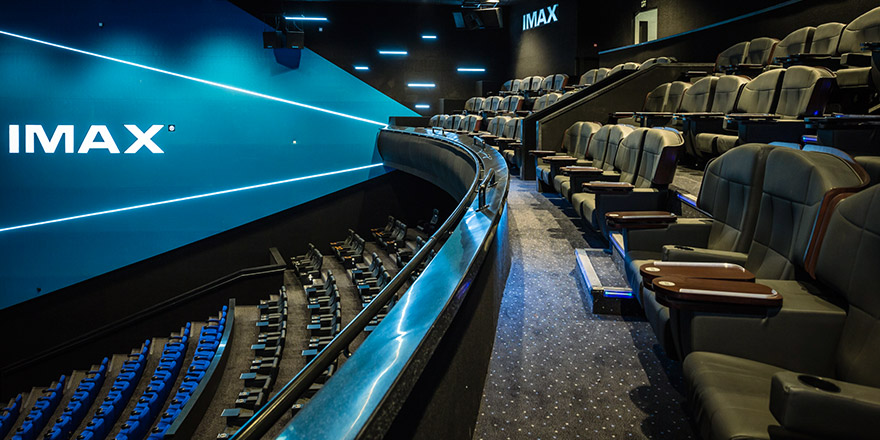 Following the news that Saudi Arabia’s Ministry of Culture and Information will be opening up the Kingdom to movie theatres in 2018 for the first time in 35 years, IMAX Corporation and VOX Cinemas, the Middle East’s largest and most rapidly growing cinema exhibitor, today announced a sales agreement for a minimum of four new IMAX® theatres in Saudi Arabia. Four theatres will be added to new multiplexes in Riyadh and other prime locations at some of the Kingdom’s most prominent shopping malls including those owned by VOX Cinemas’ parent company, Majid Al Futtaim, the leading shopping mall, communities, retail and leisure pioneer across the Middle East, Africa and Asia.

The first IMAX theatre has opened at VOX Cinemas’ new four-screen multiplex in Saudi Arabia at Riyadh Park Mall. VOX Cinemas was awarded its licence to operate cinemas in the Kingdom and plans to invest SAR2B (US$533.3M) to open 600 screens in Saudi Arabia over the next five years. In addition, IMAX theatres will be featured at VOX Cinemas in Majid Al Futtaim’s City Centre Ishbiliyah and Mall of Saudi. Today’s agreement brings the IMAX contracted network in Saudi Arabia to at least five, with two currently open, as IMAX also operates the IMAX® dome theatre at the Sultan Bin Abdul Science Center in Al-Khobar, which opened in 2005.

IMAX already has a substantial footprint in the Middle East, with VOX Cinemas operating several successful IMAX locations regionally, including Mall of the Emirates (Dubai), City Centre Qurum (Oman), City Centre Bahrain (Bahrain) and City Centre Beirut (Lebanon). IMAX first entered the Middle East in 2000, with the IMAX theatre at the Scientific Centre of Kuwait and today has a total of 32 contracted theatres in the region, inclusive of today’s agreement, of which 20 are currently open.

“Saudi Arabia presents an exciting and sizeable new growth opportunity for IMAX, and today’s agreement with our long-time partners at VOX Cinemas marks an important first step in our efforts to capitalize on this untapped market,” said IMAX CEO Richard L. Gelfond. “IMAX began delivering awe-inspiring cinematic experiences to audiences in Saudi Arabia in 2005 as the sole operating theatre in the country. We’ve been closely following the economic and cultural developments in the market and look forward to playing a key role in the growth of the Kingdom’s emerging entertainment sector.”

Cameron Mitchell, Chief Executive Officer of Majid Al Futtaim Cinemas commented: “We’re thrilled to bring IMAX to commercial theatres in KSA for the first time. We thank the Saudi Government for the faith they have placed in us and we look forward to contributing to the Saudi Vision 2030 as we support the growth of their new cinema sector.”

Mitchell continued: “We are investing heavily in creating an exceptional movie-watching experience for cinema goers in Saudi – incorporating not just the latest movie content, but also top-quality food and beverage, superior customer service and cutting-edge technology. Our Net Promoter Score platform ensures that we gauge all our guests’ feedback and continue to provide an experience that exceeds their expectations and the market standards.”

VOX Cinemas currently operates 322 screens across eight countries in the region.  The experience-focused exhibitor was also recognized on the international stage as the recipient of the CinemaCon Global Achievement in Cinema award in 2017. Offering world-class experiences tailored to each territory, VOX Cinemas has a highly successful partnership with IMAX across many of its best-performing locations in the Gulf Cooperation Council.

The announcement follows IMAX’s signing of a Memorandum of Understanding with Saudi Arabia’s General Culture Authority (GCA) on May 12 at the Cannes Film Festival. The GCA and IMAX will jointly seek opportunities to help Saudi studios and directors release films with cross-border appeal and eventually tap IMAX’s global distribution platform to export their films to non-Arabic markets.

The company is undergoing a 1.2 billion Dirham investment that will see the company expand to operate 600 screens across 50 locations in the region by 2020. Tailoring every cinema location to the surrounding market place and customer preferences, VOX Cinemas offers a mix of cinema experiences including two luxury cinema concepts, THEATRE by Rhodes and GOLD by Rhodes which are collaborations with Michelin-starred Chef Gary Rhodes. Taking the MAX big screen cinema to the next level, VOX Cinemas currently operates the Middle East’s largest cinema screen in the region at the Virgin Radio MAX screen in City Centre Deira in Dubai. VOX Cinemas also has the very first and only IMAX with Laser screen in the Middle East, holds the Middle East’s exclusive rights to the immersive 4DX experience, and operates KIDS, the very first cinema in the Middle East dedicated to kids having fun. VOX Cinemas also recently introduced OUTDOOR, the first open air VOX Cinemas in the region located on Galleria Mall’s Rooftop in Dubai for the cooler months of the year.

Founded in 1992, Majid Al Futtaim is the leading shopping mall, communities, retail and leisure pioneer across the Middle East, Africa and Asia. A remarkable business success story, Majid Al Futtaim started from one man’s vision to transform the face of shopping, entertainment and leisure to ‘create great moments for everyone, every day’. It has since grown into one of the United Arab Emirates’ most respected and successful businesses spanning 15 international markets, employing more than 40,000 people, and obtaining the highest credit rating (BBB) among privately-held corporates in the region.

Majid Al Futtaim owns and operates 22 shopping malls, 12 hotels and three mixed-use communities, with further developments underway in the region. The shopping malls portfolio includes Mall of the Emirates, Mall of Egypt, City Centre malls, My City Centre neighbourhood centres, and four community malls which are in joint venture with the Government of Sharjah. The Company is the exclusive franchisee for Carrefour in 38 markets across Middle East, Africa and Asia, and operates a portfolio of more than 230 outlets in 15 countries.

Majid Al Futtaim operates over 300 VOX Cinema screens and 32 Magic Planet family entertainment centres across the region, in addition to iconic leisure and entertainment facilities such as Ski Dubai, Orbi Dubai and Ski Egypt, among others. The Company is parent to the consumer finance company ‘Najm’, a fashion retail business representing international brands such as Abercrombie & Fitch, AllSaints, lululemon athletica, Crate & Barrel and Maison du Monde; and a healthcare business that operates City Centre Clinics. In addition, Majid Al Futtaim operates Enova, a facility and energy management company, through a joint venture operation with Veolia, a global leader in optimised environment resource management. The Company also owns the rights to The LEGO Store and American Girl in the Middle East and operates in the food and beverage industry through a partnership with Gourmet Gulf.

IMAX is headquartered in New York, Toronto and Los Angeles, with additional offices in London, Dublin, Tokyo, and Shanghai. As of March 31, 2018, there were 1,382 IMAX theatre systems (1,286 commercial multiplexes, 12 commercial destinations, 84 institutional) operating in 77 countries. On Oct. 8, 2015, shares of IMAX China, a subsidiary of IMAX Corp., began trading on the Hong Kong Stock Exchange under the stock code “HK.1970.”