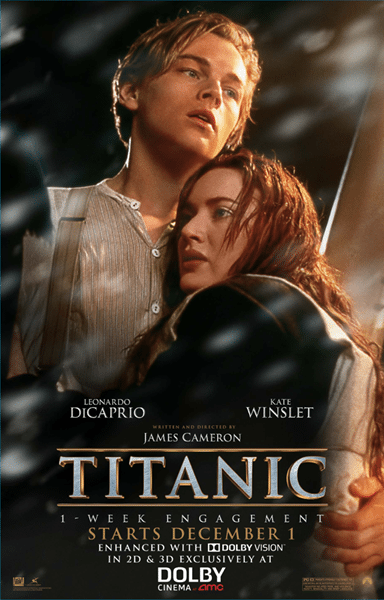 Dolby Laboratories, Inc., Paramount Pictures, and AMC Theatres today announced that “Titanic,” winner of 11 Academy Awards including Best Picture and Best Director, will return to select theaters nationwide for an exclusive one-week engagement in Dolby Cinema at AMC. In celebration of the film’s 20-year anniversary, audiences across the U.S. can experience Paramount Pictures and Twentieth Century Fox’s “Titanic” in all Dolby Cinema at AMC locations, including 20 locations supporting 3D, beginning December 1, 2017.

This marks the first-ever release of “Titanic” in Dolby Vision in 2D and 3D, a direct result of ongoing partnerships with both James Cameron and Paramount Pictures.

“We mastered a few minutes of ‘Titanic’ in Dolby Vision and I was stunned. It was like seeing it for the first time. Now that the entire film has been mastered, I’m excited to share it with audiences across the U.S.,” said filmmaker and director James Cameron. “This is beyond 3D, beyond 70mm, it’s beyond anything you’ve seen before. The image leaps off the screen as bright and vibrant as life itself. This is the way all movies should be seen and without a doubt, “Titanic” has NEVER looked better.”

“James Cameron shares our vision for creating the world’s best cinematic experiences,” said Doug Darrow, Senior Vice President, Cinema Business Group, Dolby Laboratories. “Our partnership with James and Paramount Pictures has enabled us to showcase a masterpiece of theater in the most incredible way, leveraging Dolby Vision to breathe new life into one of the most awarded films in the history of cinema. ‘Titanic’ at Dolby Cinema is truly a can’t-miss experience.”

A premium cinema offering for moviegoers, Dolby Cinema begins with the filmmakers’ vision—using the full storytelling capabilities that Dolby offers in image and sound production to transform the way movies are made and presented. With state-of-the-art image, sound, and acoustic capabilities, the movie comes alive to deliver cinema in its purest form. The Dolby Vision projection system, which uses state-of-the-art optics and image processing, delivers high dynamic range with enhanced color technology and a contrast ratio that far exceeds that of any other image technology on the market today. Dolby Cinema also includes the award-winning Dolby sound technology Dolby Atmos, which moves audio around the cinema, even overhead, placing the audience deeper inside the film’s setting.

Guests at Dolby Cinema at AMC also enjoy the incredible comfort of the AMC Signature Recliners that pulsate with the action on screen.

Moviegoers can purchase tickets to the exclusive engagement beginning November 15, 2017 at 5:30am PST through Dolby Cinema at AMC locations and online at www.amctheatres.com/titanic, with each “Titanic” ticket transaction including a free digital movie download of “Titanic” redeemable at paramountmovies.com while supplies last.

About Dolby Laboratories
Dolby Laboratories creates audio, video, and voice technologies that transform entertainment and communications in mobile devices, at the cinema, at home, and at work. For more than 50 years, sight and sound experiences have become more vibrant, clear, and powerful in Dolby. For more information, please visit www.dolby.com.

Dolby, Dolby Atmos, and the double-D symbol are registered trademarks of Dolby Laboratories. All other trademarks remain the property of their respective owners.