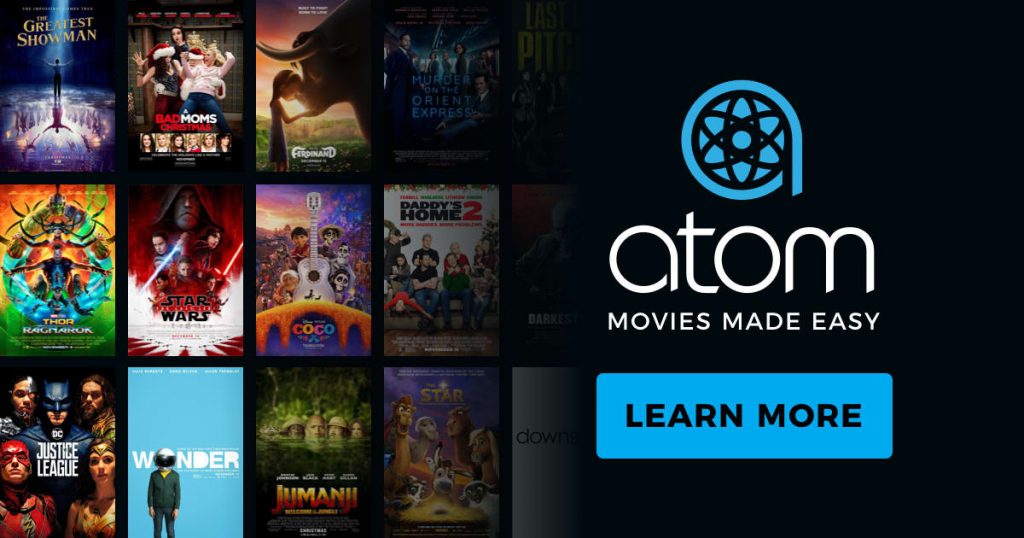 Lionsgate, Disney, and Twentieth Century Fox Film return for a second round of investments in the social movie ticketing platform

Atom Tickets today announced that it has closed its Series C round of funding, securing over $60 million in new capital for the forward-thinking social movie ticketing platform. Led by global asset management firm Fidelity Management & Research Company, the round comes less than two years after raising $50 million in Series B funding led by Lionsgate (NYSE: LGF.A, LGF.B), Disney and Twentieth Century Fox Film, all of whom are returning with Series C investments.

Following a nationwide rollout in 2016, Atom tripled its users and ticket sales in one year.  Atom is winning over digital movie ticketing buyers with innovative social features and integration into tens of thousands of movie theater screens across North America. Through its simple moviegoing app experience, Atom features advance ticket purchasing, the ability to invite friends and sit together while paying separately, concessions ordering, and bypassing the lines at the theater. This round represents Atom’s immense growth potential in the eyes of movie studio and financial enterprises.

In the last year, Atom Tickets formed an advisory board with visionary filmmakers Steven Spielberg, J.J. Abrams, and Tyler Perry to serve as a resource to the company as it continues to bring the most innovative and convenient theatrical movie experiences to consumers. Atom teamed up with recognized brands like T-Mobile and Chase Pay to provide unparalleled user experiences through special ticketing offers for top studio movie releases, making purchasing tickets faster, easier and more social than ever. Atom also partnered with top studios to connect them with audiences that buy movie tickets using proprietary data and targeting capabilities on Atom and across the web.

“This year has proven to be our biggest yet in terms of growth, because we’re leading and delivering on what the industry needs,” said Matthew Bakal, Co-Founder and Chairman, Atom Tickets. “A year ago we were rolling out our platform to exhibitors across the country, and now we’ve secured backing by Fidelity Investments, one of the biggest players in finance. We’re also thrilled to welcome back our initial studio partners Lionsgate, Disney and Twentieth Century Fox Film, whose collective industry leadership has helped guide us through these major milestones.”

“We’re pleased to participate in this latest round of financing for Atom Tickets, which has demonstrated enormous traction with exhibition partners, studios, and moviegoers during the past year,” said Lionsgate Vice Chairman Michael Burns.  “We’re delighted to add our friends at Fidelity Investments to a blue-chip group of studio and talent partners helping to take Atom to the next level as a ground-breaking force for change in the movie-going experience.”

In addition to bringing in new customers and brand partners, Atom continued to expand its exhibitor footprint in the U.S. Starting with its early supporters, AMC Theaters and Regal Cinemas, the company expanded to include Southern Theatres, Showcase Cinemas, B&B Theatres and many more.  Atom also powers digital ticketing for Regal Cinemas and the leading online movie database, IMDb.

How Atom Tickets Works:
Atom Tickets re-imagines the most convenient way for users to plan a night out at the movies. The free app and website provide relevant reviews, trailers and synopses to help customers make the best decision on what to see. Moviegoers may then invite friends (via Facebook or their contact lists) to purchase their own tickets to join them. Atom offers streamlined ordering of tickets and concessions from any Android or iOS phone. At the theater, users go directly to the ushers and concession counters, where they simply scan a QR code at tablet kiosks. Paper tickets and IOUs have been replaced by Atom’s innovative platform, which keeps all plans, messaging, payment and tickets in one place.