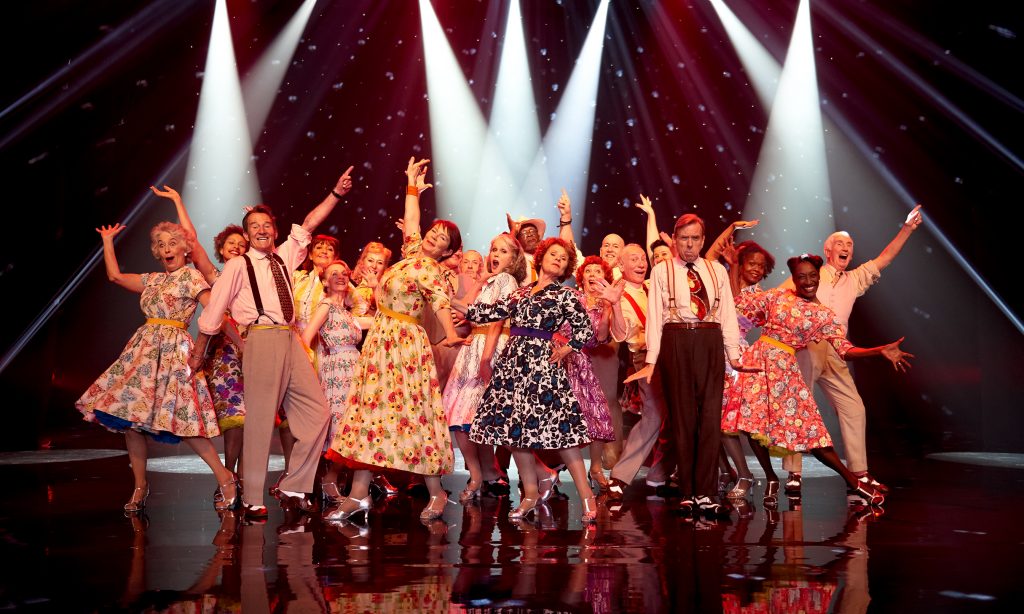 Roadside Attractions has acquired Richard Loncraine’s hilarious and crowd-pleasing comedy “Finding Your Feet,” and is partnering with Stage 6 Films on domestic distribution, it was jointly announced today by Roadside Attractions co-founders Howard Cohen & Eric d’Arbeloff, Joe Matukewicz of SPWA’s Stage 6 Films, and Dave Bishop, CEO of Protagonist Pictures. Roadside and Stage 6 Films recently collaborated on the successful distribution of “Hello My Name is Doris,” which grossed more than $14 million theatrically in the United States. (production art is attached below)

In “Finding Your Feet,” Loncraine (“Wimbledon,” “Richard III”) brings together some of the UK’s finest acting talent including Imelda Staunton, Timothy Spall, Celia Imrie, David Hayman, John Sessions and Joanna Lumley for this delightful comedy which proves a dose of dance can mend a broken heart at any age.

“’Finding Your Feet’ is one of Richard Loncraine’s best. It is brilliantly acted and completely endearing, emotional and delightfully charming and funny from start to finish. It is the kind of feel-good, character rich, second chance at life comedy that we absolutely love,” said Howard Cohen and Eric d’Arbeloff, Roadside Attraction co-founders.

When ‘Lady’ Sandra Abbott (Academy Award nominee Imelda Staunton, “Maleficent,” “Vera Drake, the “Harry Potter” series) discovers that her husband of forty years (John Sessions) is having an affair with her best friend (Josie Lawrence) she seeks refuge in London with her estranged, older sister Bif (Celia Imrie, “The Best Exotic Marigold Hotel,” “Bridget Jones’ Baby”). The two could not be more different – Sandra is a fish out of water next to her outspoken, serial dating, free spirited sibling. But different is just what Sandra needs at the moment, and she reluctantly lets Bif drag her along to a community dance class, where gradually she starts finding her feet and romance as she meets her sister’s friends, Charlie (Timothy Spall), Jackie (Joanna Lumley) and Ted (David Hayman). This colorful, defiant and energetic group of friends start to show Sandra that retirement is in fact only the beginning, and that divorce might just give her a whole new lease on love and life.

The deal was brokered by CAA and Vanessa Saal, Managing Director, sales and distribution for Protagonist Pictures. Howard Cohen oversaw negotiations on behalf of Roadside Attractions.

“Finding Your Feet” is an Eclipse Films and Powder Keg Pictures production with Catalyst Global Media and Fred Films in association with Bob & Co, Twickenham Studios and Ultimate Pictures.

About Protagonist Pictures
Protagonist Pictures is an international finance, production and sales company which has a proven track record in outstanding films and commercial successes. Based in the UK, the company handles films from around the world, always maintaining a strong focus on filmmakers with exceptional vision and storytelling skills.

About Catalyst
Co-founded in 2015 by seasoned producer Charlotte Walls, Catalyst is a multifaceted film and television production company making high-end, mainstream films and TV series for the global marketplace. The company has assembled a robust slate of content across TV and film so far, most recently wrapping principal photography on Slaughterhouse Rulez for Sony, a horror comedy starring Simon Pegg, Nick Frost, Michael Sheen, Asa Butterfield and Finn Cole, in addition to the forthcoming releases Finding Your Feet and Ghost Stories, made in collaboration with Warp Films and starring Martin Freeman, which will be released in the UK by Lionsgate and in the US by IFC. TV Projects to date include the EMMY Award-winning ITV Boxing Day premiere and event television drama “Peter & Wendy,” based on the novel “Peter Pan” by J.M. Barrie written by Adrian Hodges, as well as a unique partnership with famed director John Woo (Face/Off) on scripted original TV series “Cognition,” currently in development. In 2017 Catalyst established a specialised in-house digital games and interactive storytelling division, Catalyst Interactive, headed up by Catalyst co-founder Al Hardiman. Catalyst Interactive focuses on producing games that follow a revolutionary interactive storytelling experience for the player, utilising the company’s approach from the film and television creative culture.