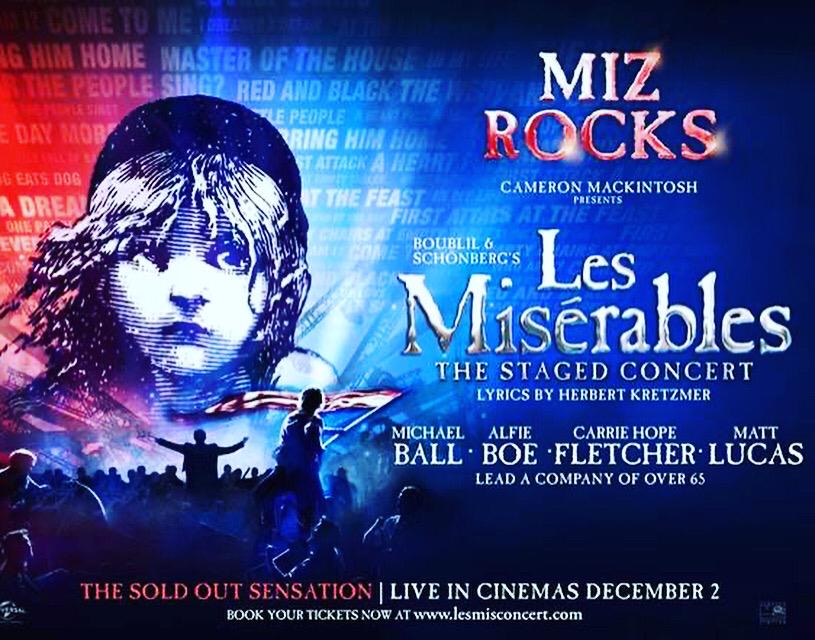 For what has already been an incredibly buoyant and record-breaking year for the UK and Ireland for event cinema, Universal Pictures now break more records with their live stream event of “Les Misérables: The Staged Concert”.

On Monday 2 December cinema audiences experienced a live broadcast of the musical phenomenon for one night only which broke box office records and sold out in cinemas across the country.

Over 600 cinema sites streamed the live show, pre-sales for the event were selling out screens within days of going on sale. The Live stream event took £2,281,150 for the one night only event, making it the highest grossing one-night live event performance of all time.

Universal Pictures, who previously brought us the recording breaking performances of “Billy Elliot The Musical Live” and “Miss Saigon: 25th Anniversary performance” – which both respectively took over £2m at UK and Ireland Box Office – will now re-enter the Top Ten titles of all time for the third time with “Les Misérables: The Staged Concert”.

“I have been thrilled with the overwhelming response to the sell-out “Les Misérables” season at the Gielgud so the news from Universal Pictures that yesterday’s live screening was the most successful ever of its kind in the UK is the cherry on the cake. That this has occurred in the 35th year of “Les Misérables” run on Shaftesbury Avenue, which continues at the rebuilt Sondheim Theatre, has to be a unique achievement in the history of Musical Theatre. My heartfelt thanks to all the wonderful artists who have appeared in the show everywhere in the world and to the public for their continued embrace of this timeless and ever contemporary musical”

Talking about the show’s success, Vue Entertainment – who remain the leading UK exhibitor for event cinema content – Group Event Cinema Manager, Johnny Carr said: “We are delighted to have welcomed so many guests to experience “Les Misérables: The Staged Concert”. Our screenings enabled a much wider audience to experience this special concert through the power of the big screen and provided a unforgettable night out. Our admissions records for a live event have been broken, feedback from audiences has been incredible, and we look forward to welcoming many more guests to our encore screenings on Saturday 7th and Sunday 8th December 2019.”

2019 is now firmly the biggest year for event cinema in the UK and Ireland, with box office currently at £47,086,388 [Comscore up to 30 November] Nine titles during 2019 have now taken over £1m. September was the highest month of all time, taking over £7m in the box office, with National Theatre’s Live “Fleabag” taking over £4m. Commenting on the year to date, Luke Williams at Comscore said:

“We have already seen unprecedented levels of success for event cinema at the UK & Ireland box office this year, with total event cinema grosses to the end of November comfortably eclipsing the previous record of £41.3m set in 2018. Following the success of “Les Misérables”, we are now on course to record annual event cinema box office takings of over £50m for the first time in history.”

The excitement and interest around event cinema content continues to flourish and there is no doubt that this is a growing area of cinema programming. Those working in event cinema content have successfully packaged and delivered a fruitful model that attracts new audiences to cinemas. Audiences that want to enjoy a shared experience of magical moments – whether it be theatre, opera, ballet, music concerts or sporting events – event cinema is entertaining audiences outside of the traditional forms.

About Event Cinema Association
The ECA supports and promotes event cinema on behalf of its members, championing the growth and raising awareness of this evolving category of ‘Big Screen’ content.

Event Cinema – sometimes called Alternative Content – refers to the use of cinemas to screen a varied range of live and/or pre-recorded entertainment, such as: sport, opera, musicals, ballet, one-off TV specials, current affairs, comedy and live gaming. Event Cinema is defined more by the methodology of release (frequency of events) rather than by the content itself and distinguishes itself from traditional films/cinema releases.