ECA Confirms Line Up For Its First-Ever Industry Slate Day 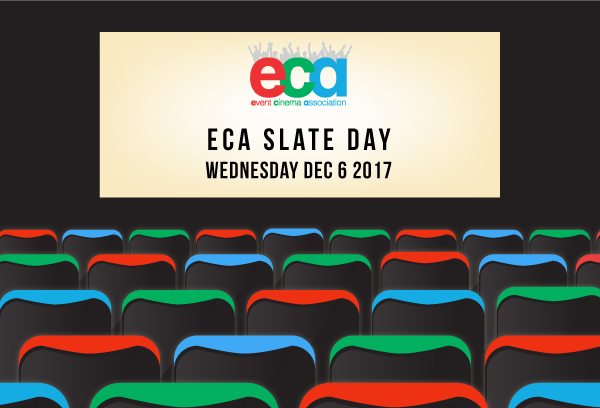 Representing the leading names in Event Cinema distribution, the event promises to provide truly valuable insights into the next 6-12 months’ worth of events in the calendar.

To be hosted at the Vue West End in London at 9am on Thursday December 6, the event has already attracted considerable attention, with delegates confirmed from the UK and European exhibition markets. The day will include a number of presentations, business insights and showreels, with the following distributors due to be represented, with further distributors still to be confirmed:

During the day, each distributor will be showcasing upcoming highlights of their forthcoming content, their release strategies, and box office forecasts and the have the opportunity to make genuinely exciting announcements to exhibitors on specific new titles. Vue’s participation provides the chance to screen theatrical trailers for forthcoming events on their Sony 4K-, Dolby Atmos-equipped big screen.

Melissa Cogavin, Managing Director said, “This is the first time the Event Cinema industry has held an event of its own to showcase upcoming releases and we are thrilled with the enthusiasm shown by both participants and delegates. Our members’ dynamism and passion for their content illustrates just how vital an event such as this is to help market their products properly. The level of engagement we have seen confirms the significance of Event Cinema in the exhibition landscape.”

The international audience will be made up of exhibitors and distributors, digital agencies, content owners, marketers, ad agencies, post houses as well as those from home entertainment. Following the presentations there will be a lunchtime networking session with food and drinks supplied by Molson Coors and Rollover. The event has been kindly sponsored by Vue, Cinema Next, Éclair, Motion Picture Solutions & LANsat, Qubewire, Managed Networks and Jack Roe. Other food and drink has been kindly supplied by Coca Cola, Rollover and Joe & Seph’s Gourmet Popcorn.

Tickets are GBP £25 for members, GBP £45 for non-members and are limited, but can be purchased here:

Please email info@eventcinemaassociation.org for details on how to participate.

The Event Cinema Association
The Event Cinema Association is a non-profit organization overseen by a president and 10 Board Directors comprised of international exhibitors, distributors, content producers and technical providers. It was created to both support and promote the developing market for cinemas looking to offer different types of events to audiences such as operas, ballets, theatre, concerts, sport and special events.   The role of the ECA is to provide a united voice for the Event Cinema industry in 41 territories worldwide and promote and support the industry via its ECA Awards, show reels, trailers, conferences, networking events, trade shows, industry reports, statistical data and best practice guides.

For more information about the ECA:  http://www.eventcinemaassociation.org/