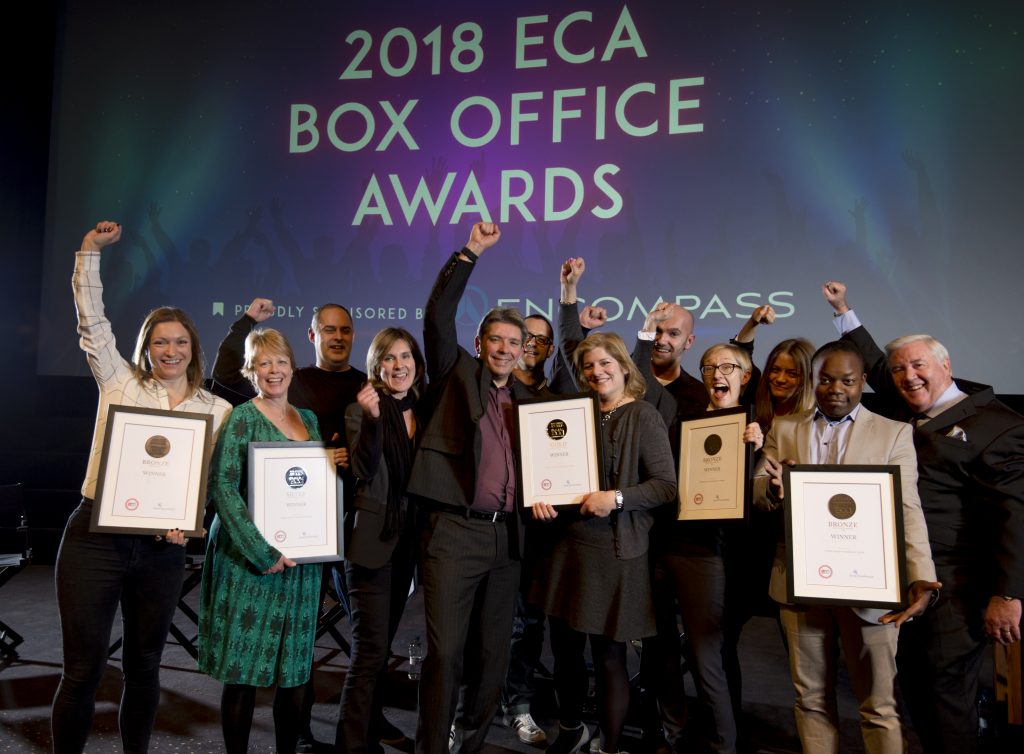 The ECA’s 5th annual conference took place in London today at the Vue West End in Leicester Square and as part of a busy day’s presentations, discussion and networking the ECA Box Office Awards were the highlight of the day.

Sponsored by Encompass for the second year running, the Awards are intended to give recognition to the effort and achievements of the ECA’s very global membership, and the winners demonstrate the vast diversity and appeal of Event Cinema in all its different genres.

Cogavin added, “Every year we do this we are encouraged by the enthusiasm and number of medals to award to our members.  It’s an honour to recognise how hard our members work throughout the year and at the ECA we want to grow the industry; we feel that this ceremony goes a long way to raising the profile as much as providing a well-deserved feel good factor for all concerned.”

Encompass’s Sales Director Nigel Crow said, “It’s been a pleasure to support the ECA and their members today at the ECA Conference, and in particular the Box Office Awards. We feel that it’s important to recognise the effort and achievements of distributors of Event Cinema and Encompass are very happy to support all the winners today – they are to be congratulated.”

The winners this year demonstrate the true international nature of the Event Cinema industry, with medals going to distributors Exhibition on Screen and the Royal Opera House in the UK, Nexo from Italy, Pathé Live from France, Piece of Magic Entertainment from the Netherlands, a multitude of gongs to Fathom Events in the USA including the only gold medal for last year’s smash hit Pokémon The Movie – I Choose You! and closer to home one of two awards going to newcomers Trafalgar Releasing for Dave Gilmour Live in Pompeii, a music concert attended by nearly 400,000 fans in cinemas worldwide, which gained them a silver award.

“Trafalgar Releasing has had an incredible first year under our new ownership and brand. It is an honour to be recognised today by the ECA, on the first anniversary of the new company, with box office achievement awards for David Gilmour Live At Pompeii and Rammstein Paris. We remain committed to breaking boundaries across the film and event cinema sector and are looking forward to a jam packed year ahead.”

Normally the Awards for Excellence recognizing the best exhibitors and outstanding contribution categories would take place at the same time but these are planned to take place at the next Slate Day later in 2018.  The focus this time was on Box Office excellence at this event.

Details of last year’s winners and a gallery of images can be seen here https://www.eventcinemaassociation.org/eca-event-awards.html

Full details on today’s winners are available will be announced on our website and in addition to the images provided, a full gallery of high res images is available on request.

The Event Cinema Association
The Event Cinema Association is a non-profit organization overseen by a president and 10 Board Directors comprised of international exhibitors, distributors, content producers and technical providers. It was created to both support and promote the developing market for cinemas looking to offer different types of events to audiences such as operas, ballets, theatre, concerts, sport and special events.   The role of the ECA is to provide a united voice for the Event Cinema industry in 41 territories worldwide and promote and support the industry via its ECA Awards, show reels, trailers, conferences, networking events, trade shows, industry reports, statistical data and best practice guides.