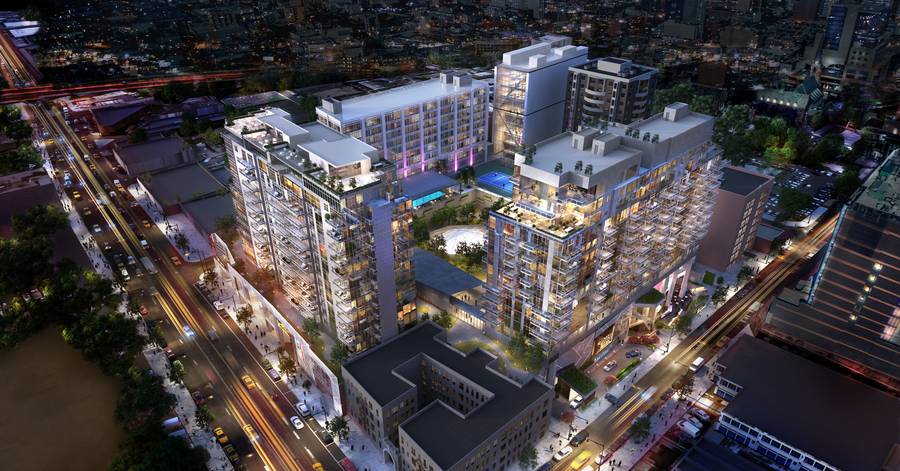 Leading real estate development companies F&T Group and SCG America are pleased to formally announce that the world’s fifth largest global movie theatre chain, South Korea-based CJ CGV, has signed a lease for a 34,000-square-foot multiplex at Tangram in Flushing, Queens. CGV Tangram Flushing will become the third CGV Cinemas location in the United States, and the first in New York City. This new location follows CJ CGV’s expansion efforts in the U.S. after becoming one of the largest cinema operators in Asia, including 89 theatres in China and growing.

The theatre will be located within the 1.2-million-square-foot mixed-use development, which is elevating the draw of the neighborhood through its groundbreaking vision of cutting-edge retail, residential, office and hotel space.

“Flushing is one of the most exciting neighborhoods in all of New York City – a cultural hub undergoing a vast transformation from a small Queens neighborhood to one of the most sought-after real estate markets in the city,” stated F&T Group Executive Vice President Helen Lee. “The standard of living has certainly elevated, and sophisticated residents and visitors alike want more. Through the culmination of years of F&T Group’s vision, hard work, and planning, Tangram is the answer to this shift, as evidenced by attracting a renowned global brand like CJ CGV.”

At the core of the retail component will be CJ CGV’s unique movie-going experience known as ‘Cultureplex’ – a concept emphasizing the entire movie theatre as a complete and immersive cultural experience. CJ CGV poses a unique position in the Flushing community thanks to its expertise in bringing the best in Hollywood and Asian films together.

CGV Tangram Flushing will be the first theatre to open in Flushing in 30 years, further solidifying Downtown Flushing as a world-class destination, with Tangram at its epicenter.

CGV Tangram Flushing will include two groundbreaking immersive cinema experiences – the first 4DX location in Queens and the first ScreenX auditorium in NYC. 4DX allows the audience to connect with movies through motion vibration, and environmental effects such as wind and rain. ScreenX provides a 270-degree panoramic theatre experience, extending the screen visuals to the left and right. The new theatre is set to have seven auditoriums in total.

Tangram is inspired by the traditional Chinese dissection puzzle “tangram,” which consists of seven flat pieces called tans put together to form shapes. All the pieces of Tangram will come together to offer a thoughtfully-designed, year-round lifestyle destination that will also include 312 residences, 48 office condos, a lifestyle hotel, a chef-driven food court and high fashion shopping.

“As we continue to expand worldwide, our presence in the United States is essential. When we discovered the opportunity to be an integral part of Tangram, we knew being in this economically vibrant and evolving neighborhood was where our first East Coast movie theatre had to be,” said Paul Richardson, COO of CJ CGV. “Tangram offers all the essentials of first-class entertainment that will now include CJ CGV’s next generation of storytelling. We’re excited to be a part of this forward-thinking, robust destination.”

“There’s an energy in Flushing that cannot be ignored, and Tangram is at the epicenter,” stated SCG America Executive Vice President Thunder Zhou. “CJ CGV has over 1,000 movie screens in Korea alone, and now they’re a part of Tangram. It’s an amazing testament to the quality of our product and to the evolution of the neighborhood.”

Geoff Bailey of SCG Retail, the exclusive retail broker of Tangram, represented the project as well as CJ CGV in the deal.

Construction is underway at the full-block site, with frontage on 37th Avenue, Prince Street, 39th Avenue, and College Point Boulevard. Retail will be delivered first, with an expected 3Q 2018 opening. Additional offerings will include an array of international and domestic fashion brands, cutting-edge restaurants, an authentic culinary food hall and a variety of entertainment options. Designed by Manhattan-based design studio BHDM, which has worked with A-list retail clientele including Tory Burch and Calvin Klein, the crisp and modern retail space embraces an indoor-outdoor aesthetic. It will be enclosed by a glass skylight with a central atrium within a two-level, 225,000-square-foot retail podium, reminiscent of a sprawling piazza.

“Simply put, Tangram is a game-changer for Flushing,” added Lee. “It’s truly unlike anything ever seen or done in the neighborhood.”

Shanghai Construction Group (SCG) is one of the leading construction conglomerates in China and a pioneer in the development of modern cities, with work spanning decades. Publicly listed on the Shanghai Stock Exchange since 1997, with footprints in more than 30 countries and regions, SCG was ranked the 10th largest global contractor by Engineering News-Record in 2016. SCG America (SCGA), a wholly-owned subsidiary of SCG headquartered in New York City, has three decades of experience and currently has over $3 billion invested in real estate in the United States. Its services range from general contracting, construction management, real estate development and real estate fund management. As highly sought-after builders and developers, SCGA strives for professional excellence and technological innovation that creates enduring value for partners and customers alike.

CJ CGV is the largest multiplex cinema chain in South Korea, and the world’s Top 5 cinema exhibition company present in China, Vietnam, Indonesia, Myanmar, Turkey and the United States. CJ CGV is a subsidiary of CJ Group, Korea’s leading diversified conglomerate with presence in the food and food service, pharmaceutics and biotechnologies, entertainment and media, home shopping and logistics industries. CJ CGV is currently operating 3,120 screens at 412 locations in seven countries around the world. It was able to secure long-term competitiveness via endless efforts and investment in global market which contributed to established the backbone to become and solidify as the top multiplex chain in Asia. The company emphasizes and constantly develops new movie technologies such as 4DX and ScreenX, and its own cinema solutions including CRM, NOC & TMS and PhotoTicket. CJ CGV is the largest multiplex cinema chain in South Korea. In the U.S., CGV Cinemas are currently located in Los Angeles and Buena Park, California.