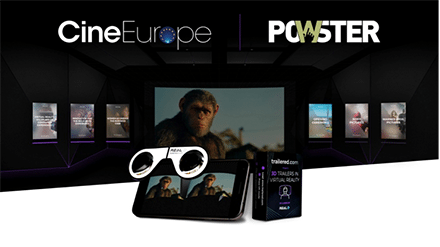 Upon registration, each CineEurope delegate will receive a packet that includes the world’s first RealD-designed VR glasses to be used with POWSTER’s new mobile phone app trailered.com, which allows attendees to experience the CineEurope conference in a virtual reality cinema.

The CineEurope experience begins with 3D clips of invitations to official movie studio slate presentations, panel sessions and other important conference events.  Attendees also can access an advanced experience of the regular trailered.com website, which allows the user to watch trailers for movies at nearby cinemas in 3D, making the decision to attend a film quick and easy.

“REALD is the industry’s largest visual technology company and we have been at the forefront of embracing and introducing consumers to the next generation of enhanced entertainment experiences,” said Travis Reid, President of Worldwide Cinema and Chief Operating Officer for RealD.   “We believe VR is the next frontier for truly immersive 3D and this unique promotion with POWSTER builds on our company’s heritage and mission towards delivering 3D to literally every screen imaginable.”

“POWSTER is excited to bring 3D virtual reality trailers to online audiences, helping drive our mission of getting more people into the cinema,” says POWSTER CEO Ste Thompson.  “And we’re thrilled to launch our trailered.com app with RealD and CineEurope.  Trailered.com reduces the effort required to find what you want to see at the cinema, resulting in more cinema admissions. It connects the dots between a consumer and a ticket sale while providing entertaining content in an accessible and exciting fashion. That serves all sides of the cinema equation and we’re excited to be working with RealD to bring CineEurope attendees a pocket-sized device for watching 3D trailers.”

Globally recognized as the world’s visual technology leader, RealD pioneered digital 3D cinema and today has the world’s largest 3D cinema platform. RealD’s dominant market share is comprised of a network of theatres that include more than 29,000 installed screens with a backlog of 3,000 additional contracted installations in 72 countries with over 1,200 exhibition partners. RealD is the world’s preeminent 3D brand, with well over 2 billion people having experienced a movie in RealD 3D.  For more information visit: www.reald.com

POWSTER, a Vista Group (NZX & ASX: VGL) company, is a creative and innovation studio operating in London and Los Angeles. The business provides creative services to the film and music industry and creates products to help engage users with entertainment content. The global leader in film distribution marketing websites, POWSTER creates more than 100 destinations a month for 70+ movie distributors in over 40 countries.  The POWSTER movie platform enables over five million consumers a week to discover cinema show times on official movie websites.  POWSTER is modernizing how movies are marketed and delivering innovation to digital entertainment content.

CineEurope 2017 will take place 19-22 June at the Centre Convencions Internacional Barcelona (CCIB) in Barcelona, Spain. CineEurope is the longest-running and most successful European convention and trade show for Major, Regional, and Independent cinema professionals. CineEurope will feature exclusive screenings and product presentations of upcoming films, sponsored events, timely and informative seminars and the CineEurope Trade Show. CineEurope is the Official Convention of the Union Internationale des Cinémas/International Union of Cinemas (UNIC).