Powster Launches “Trailered,” An Innovative New Approach To Discovering Movies In Theaters Around You 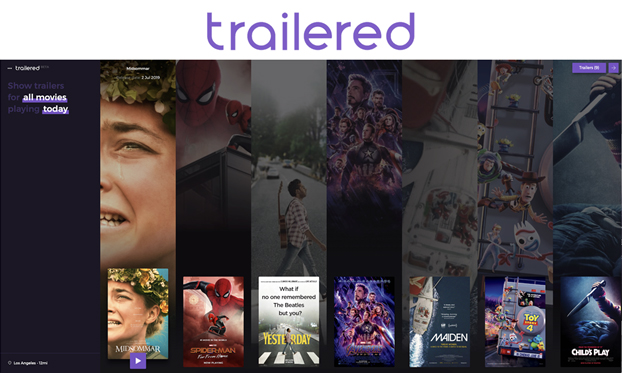 Trailered, Powster's new web-app, elevates the movie-going experience from the outset, allowing audiences to instantly see trailers, showtimes and purchase tickets for any movie currently playing in their local area

Powster, the award-winning interactive creative studio, and production company for over 150 movie distributors, today announced the launch of Trailered, a new web-app search tool for all films showing in theaters nationwide.  With Trailered, moviegoers can instantly see trailers, showtimes and purchase tickets for films currently playing at nearby cinemas through one simple online access point.

From blockbusters to cult classics and indie gems, Trailered geolocates users, showing them the closest movie theaters and which films are playing at each location. Moviegoers can easily create personalized playlists of their preferred films across genres and formats, such as action, horror, comedy, animation, 3D, documentary and more, while still being able to select an exact day and time to see any of the films nearby. Trailers play on the website alongside film art and release dates for every movie listed.

“Finding what’s on in movie theaters involves visiting many different websites and sometimes 100s of clicks to navigate to various trailers and movie pages. Trailered makes the entire journey a much more engaging, streamlined and simpler for moviegoers,” said Ste Thompson, CEO and Creative Director of Powster. “Trailered makes finding which movies are playing at theaters nearby an effortless user experience. Simply load the site, and press play on any trailer listed. Those trailers listed are the current films in the movie theater that you can view that same evening.”

Trailered is in the United States covering all movies and movie theaters. Moviegoers can currently try the web-app in their web browser for free. To experience the ultimate way to discover cinema, visit www.trailered.com.

About Powster
Powster, part of Vista Group International (NZX & ASX: VGL), is an award-winning interactive creative studio and production company for over 150 movie distributors including all six major studios, and various major music labels globally. Powster’s platform enables over eight million consumers a week to discover cinema showtimes on official movie websites. Powster develops creative and engaging content such as music videos, websites, interactive experiences, and more. In 2018, the company built close to two thousand official showtimes and ticketing sites worldwide, including official sites for big blockbusters like “Star Wars” in over 25 countries, to independent releases. The platform lists all cinemas playing the movie and allows the studios to intelligently market their movies based on real-time analytics.