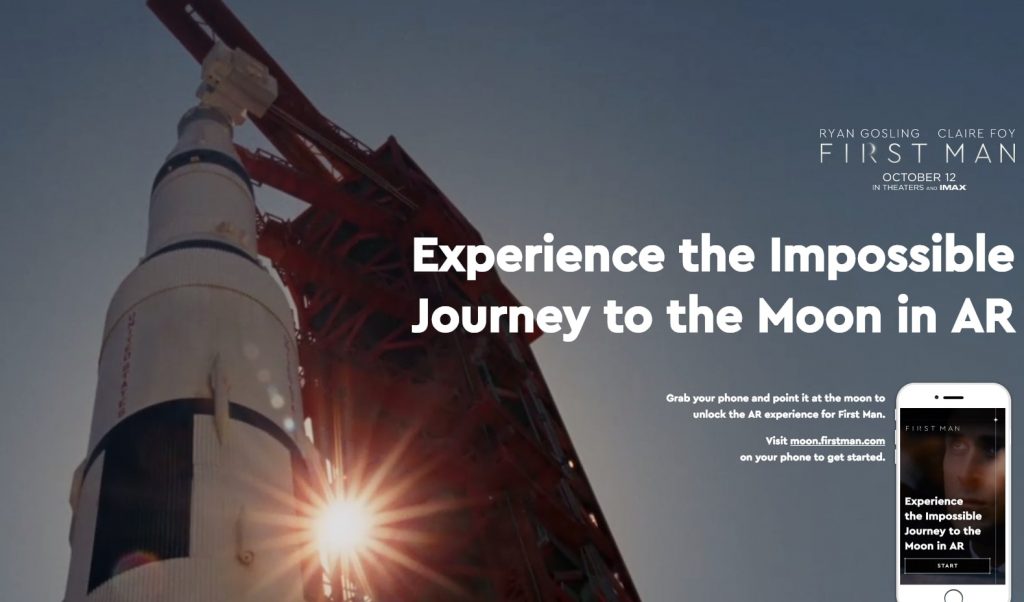 POWSTER, the creative studio that works with over 100 movie distributors including all six major studios, has announced a brand new division named POWSTER Labs. The team of highly skilled, creative experts based in Los Angeles will power up studios’ movie-marketing campaigns. POWSTER Labs is already aiming high, allowing moviegoers to detect the moon in their mobile web browser to activate an Augmented Reality experience for Universal Pictures’ First Man, starring Ryan Gosling. The creative marketing asset takes users on a journey to the moon while accessing behind-the-scenes footage and exclusive clips from the movie.  The specialized division will pioneer developments in interactive VFX Breakdowns, interactive WebGL, 3D galleries, and interfacing with new APIs and effects released by publishers and social networks. POWSTER Labs comprises a dedicated, full time innovation team assembled to create award-winning client campaigns, that will add new value to the entertainment industry.

POWSTER is known to redefine what is possible in digital marketing for the entertainment industry. The AR asset created by POWSTER Labs for Universal Pictures’ First Man breaks the barriers of what can be used as an AR tracker by reshaping the software’s capacity for image recognition. POWSTER is recognized for several other world firsts, including the award-winning VFX Breakdown for Pacific Rim: Uprising, which went on to win FWA Site of the Day. Audio isolation was achieved in the 360 video created for John Williams: A Life in Music, the video was honored with a Lovie Award for experimental, innovation in social media. The interactive music video engineered for “Work it Out” by Netsky has been honored as Adobe’s Cutting Edge Project of the Month. POWSTER’s creative campaign to promote the launch of Newton Faulkner’s fourth album Studio Zoo gave fans intimate access to Faulkner’s creative process via a live stream of his studio and the ability to interact with the artist on social media and control his house with Twitter. The project was named one of Google Sandbox’s Campaigns of the Year.

POWSTER Labs will continue to engineer the most innovative marketing tools available, optimized with ticket sales in mind. POWSTER CEO, Ste Thompson comments, “We are constantly pushing forward and keeping up with the way digital is changing, and I think that’s our unique quality. We aren’t just business people pushing a product, we are inventors looking at the future and constantly building new things.”

POWSTER also creates over 150 official movie destinations per month, powering ticketing websites for some of the largest blockbuster movies. Founded in London in 2009 as a sole proprietorship, Mr. Thompson sold a portion of the company to Vista Group in 2017 and expanded operations to a second studio in Los Angeles. Now, with a dedicated team housed in the same city as the major studios, there will be further innovation led by the needs of those studios. POWSTER Labs is inventing new methods of interactive storytelling; visit https://moon.firstman.com/ on your mobile browser to experience POWSTER Labs’ first mission; AR track the moon.

POWSTER, part of Vista Group International (NZX & ASX: VGL), is a creative and innovation studio operating in London and Los Angeles. The business provides creative services to the film and music industry and creates products to help engage users with entertainment content. The global leader in film distribution marketing websites, POWSTER creates more than 150 destinations a month for 100+ movie distributors in over 40 countries. The POWSTER movie platform enables over five million consumers a week to discover cinema show times on official movie websites. POWSTER is modernizing how movies are marketed and delivering innovation to digital entertainment content. The future of movie marketing and interactive storytelling is coming soon.

On the heels of their six-time Academy Award®-winning smash, La La Land, Oscar®-winning director Damien Chazelle and star Ryan Gosling reteam for Universal Pictures’ First Man, the riveting story behind the first manned mission to the moon, focusing on Neil Armstrong and the decade leading to the historic Apollo 11 flight.  A visceral and intimate account told from Armstrong’s perspective, based on the book by James R. Hansen, the film explores the triumphs and the cost—on Armstrong, his family, his colleagues and the nation itself—of one of the most dangerous missions in history. www.firstman.com