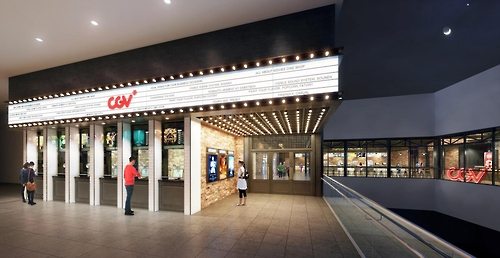 CJ CGV, will open its flagship U.S. location in Buena Park, California at the new The Source OC shopping center on January 27. The fifth largest multiplex theatre company in the world and a total cinema solution provider, CJ CGV operates 2,877 screens at 376 locations in seven countries. This will be the second CGV theatre in the United States, with the first located in Koreatown, Los Angeles.

CGV Buena Park marks the first time the U.S. market will be able to experience the company’s “Cultureplex” concept. Currently deployed at staple CJ CGV sites around the world, “Cultureplex” is the idea of a movie theatre as a complete and immersive cultural experience.

“A CGV theatre is a place where people from all generations can converge to relax, hang out, grab a drink and step away from the world from the moment they come through our doors,” said CJ CGV Americas CEO Mark Shaw. “Opening this site in Southern California is an incredible milestone for us and we are excited for movie-goers to enjoy it.”

Activities and special events – including performances from local bands, conventions, and more – will be part of the site’s atmosphere following the grand opening.

Opening Weekend Movie Line-Up
CGV Buena Park will show the biggest hits from South Korea as well as popular films from Hollywood to China and Vietnam with certain releases subtitled in English, Korean, Chinese and/or Vietnamese. On January 27, hit Hollywood blockbusters and South Korean imports being screened at CGV Buena Park include Sony Pictures’ “Resident Evil: The Final Chapter,” starring Milla Jovovich and directed by Paul W.S. Anderson, and “The King (??)” from N.E.W. in South Korea, starring Zo In-Sung and Jung Woo-Sung and directed by Han Jae-Rim. Additional titles rounding out the opening weekend program are Paramount Pictures’ “xXx: Return of Xander Cage,” CJ E&M’s “Confidential Assignment” and special showings of “The Himalayas,” “BIGBANG MADE: The Movie,” and “Operation Chromite.”

Premium Features –
The new theatre will feature eight screens and 1,187 seats, with a key component of CGV Buena Park being the presence of the industry’s leading immersive cinema technologies, 4DX and ScreenX – the first time both will be available in one U.S. theatre complex – along with a comprehensive offering of premium features, including:

Additionally, a series of promotions and deals are being offered around the Grand Opening, including tote bag and ticket giveaways for first-time members; unlimited “spin-the-wheel” in the main lobby (guaranteeing prizes for participants); a free 4DX screening of “Resident Evil: The Final Chapter” for anyone who tags their friends on a CGV Facebook post, and free flavored popcorn coupons for patrons who check in on Yelp.

About CJ CGV
CJ CGV is the largest multiplex cinema chain in South Korea, and the world’s Top 5 cinema exhibition company present in China, Vietnam, Indonesia, Myanmar, Turkey and the United States. CGV is a subsidiary of CJ Group, Korea’s leading diversified conglomerate with presence in the food and food service, pharmaceutics and bio-technologies, entertainment and media, home shopping, and logistics industries. As of January 2017, CJ CGV is operating 2,877 screens at 376 locations in seven countries around the world. It was able to secure long-term competitiveness via endless efforts and investment in global market which contributed to established the backbone to become and solidify as the top multiplex chain in Asia. The company emphasizes and constantly develops new movie technologies such as 4DX and ScreenX, and its own cinema solutions including CRM, NOC & TMS and PhotoTicket.