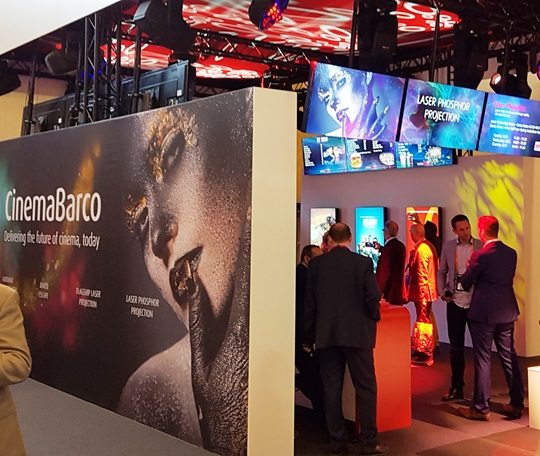 Global technology leader Barco will be demonstrating its full suite of cinema solutions at this year’s CineEurope in Barcelona (20-22 June). Through a wide variety of keynote presentations, panel discussions and technology demonstrations, Barco Cinema shows its vision and market leadership in the European and global cinema landscape.

Cinema is one of the cornerstones of Barco, and we’ve always been committed to helping exhibitors improve operational efficiencies while providing exceptional movie experiences. Our extensive laser projector portfolio, with 15 laser-illuminated projectors for every cinema screen, as well as other innovative technologies, help us take that commitment to new levels. By delivering unequalled image quality for the lowest total cost of ownership, Barco has become a preferred partner to the world’s leading exhibitors.

Delivering the future of cinema – together!
At the CineEurope trade show Barco will showcase its full laser portfolio (Barco booth CCIB Suite A) of high-contrast and high-brightness Flagship Laser and Smart Laser series: “We’re launching two new Smart Laser projectors, at the high end. This will complete our full range of Barco Cinema projectors with Laser light source.

The DP2K-32BLP and the DP4K-32BLP, producing up to 33,000 lumens, are perfectly capable of illuminating the larger cinema screens while offering all the cost benefits of our smart laser product range, which include energy savings of up to 50%. Barco has established market and innovation leadership in laser projection, by offering exhibitors the best laser projector fit for every size and type of screen, giving them the widest choice to turn their entire circuits into laser complexes,” says Stijn Henderickx, Vice President of Cinema at Barco.

Flagship Laser presenting new movie releases at the Auditorium
Barco’s Flagship Laser is not only becoming the projector of choice for the majority of premium cinema screens worldwide, it is also playing a key role during the screenings at CineEurope. When presenting their new movie line-ups to a demanding and professional cinema audience, studios and producers want nothing but the best image projection technology. No wonder that Barco’s Flagship Laser is the preferred choice for many of the 2D and 3D presentations, offering the discerning audience the ultimate visual experience.

Smart Laser in action at the Cinesa Theater
With laser projection quickly finding its way into mainstream cinema screens across the world, Barco’s Smart Laser portfolio offers the perfect balance between cost-savings and operational efficiencies together with superior and stable image quality. The feature presentations and demonstrations of the new, high-end BLP series will provide participants with a deep understanding of the business value of these projectors and at the same time amaze them with the visual performance in a real-life cinema theater.

Barco will host two sessions on Tuesday 20 June (10 AM and 3PM) and two sessions on Wednesday 21 June (10AM and 2PM) at Cinesa, Diagonal Mar for its customers and partners to witness the performance for themselves.

CineEurope visitors can enjoy the Barco Lobby Experience at the Coca-Cola Lounge at the CCIB.

Barco Escape: the ultimate immersive cinema experience
Barco Escape delivers compelling audience experiences and drives equally compelling results at the box office. This multi-screen, panoramic movie format is so powerful it delivers audiences to the cinema for an experience only available in theaters. Join us for a first look at scenes from Director Scott Waugh’s “6 Below” and moments from the Wesley Snipes-led thriller “The Recall,” along with other exclusive content.

Visitors can see Barco Escape in action at demo room M119 at the CCIB.

Hospitality events
As an event sponsor, Barco will also host a series of hospitality events. Visitors are welcome to enjoy a refreshing drink at the Belgian Beer Bar (Barco booth; Wednesday 21 June from 15h30).

All demo shows are open to the CineEurope public. A specific press meeting will be held on Tuesday 20 June from 8h00 to 8h45 at the Barco booth.

About Barco
Barco designs technology to enable bright outcomes around the world. Seeing beyond the image, we develop sight, sound, and sharing solutions to help you work together, share insights, and wow audiences. Our focus is on three core markets: Enterprise (from meeting and control rooms to corporate spaces), Healthcare (from the radiology department to the operating room), and Entertainment (from movie theaters to live events and attractions). In 2016, we realized sales of 1.102 billion euro. We have a team of 3,500 employees located in 90 countries, whose passion for technology is captured in 400 granted patents.