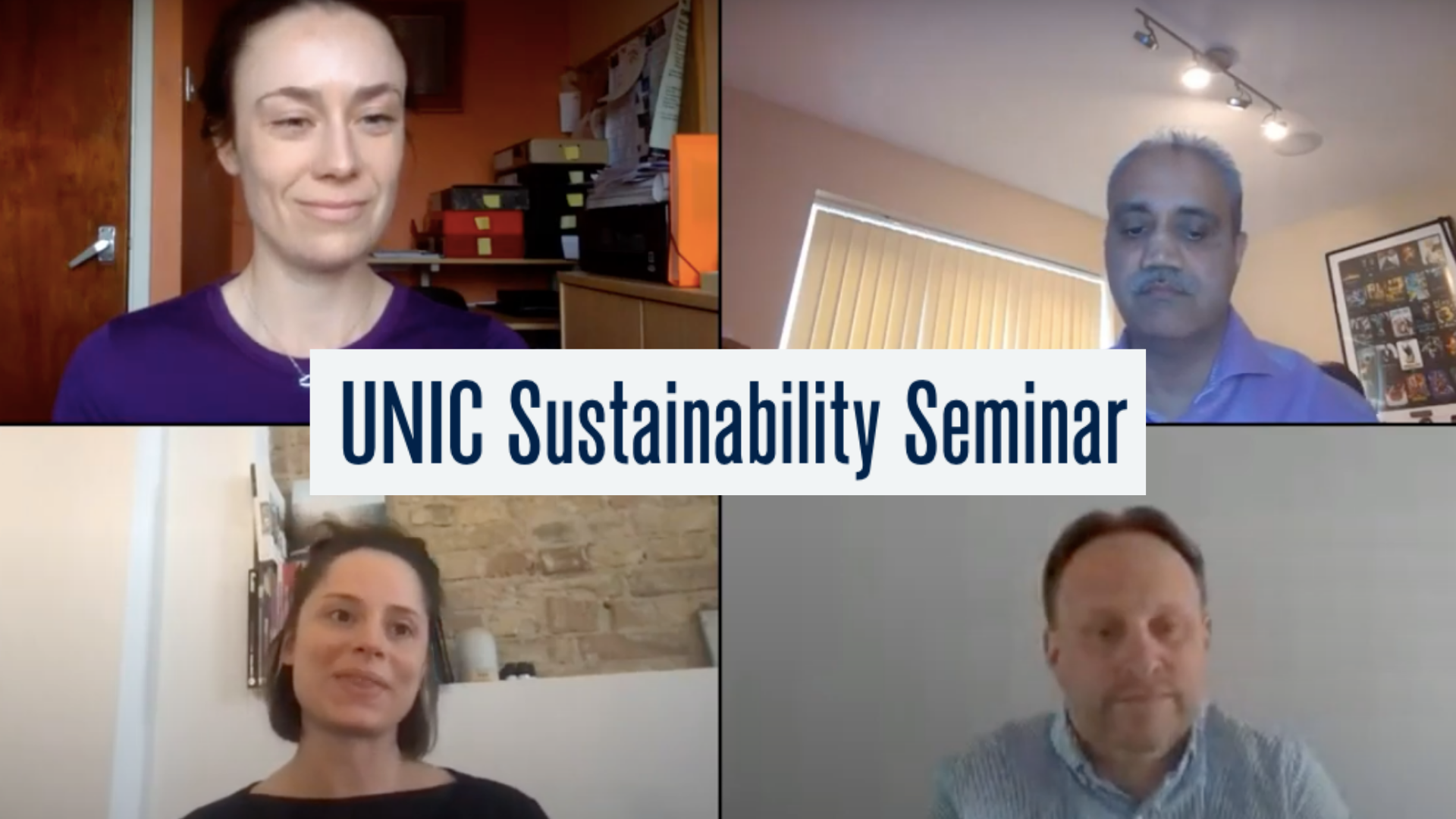 After its conception in 2019, the first-ever online version of the Circular Economy Retail Group was held in April of this year, hosted by the International Union of Cinemas (UNIC). The agenda saw a jam-packed afternoon of legislative updates, European progress and insights and advice, from experts in cinema operations and sustainability. And in case you missed it, a previous Celluloid Junkie write up covered “Part One” of the session and, as a follow up to that piece, we’re delving into the panel discussion on “Greening Your Cinema”.

Moderated by yours truly, the panellists were Kam Dosanjh (Vue’s Director of Operations), Lucie Morvan (Yorck Kinogruppe’s Head of Operations) and Adam Nelson (Odeon’s Group Head of Facilities). A big, delayed, thanks to the participants for their insights and contributions to the questions asked, shared below, which will hopefully inspire and encourage others to take up the “green mantle”.

Developing a Strategy
Lucie Morvan kicked off the discussion by giving an overview of Yorck’s delightfully unique venues, all dotted around Berlin, Germany, most of which are located within older, repurposed – often interesting – buildings with history.

Morvan highlighted the challenge of converting older buildings to more sustainable operating methods but that hasn’t stopped the team looking for ways to do so.

Yorck has always had a focus on sustainability, sometimes in smaller, almost accidental ways that have then been adopted in the longer-term. Reusable glass bottles, organic and sustainable concessions products in recyclable packaging are two examples of these. An intentional partnership, however, formed in 2014 with Naturstrom has meant that all of Yorck’s cinemas have been powered by the green energy company for the last seven years, or so. This partnership helps to offset carbon emissions where the older cinema sites themselves may struggle to physically or logistically adapt to more eco-friendly measures. And three years ago, Yorck joined Kino Natürlich, a nationwide project and collective of more than 300 German cinemas, designed to move the cinema industry towards being more ecologically sustainable.

Both smaller and larger measures such as these have been grouped together and are part of Yorck’s overall strategy, which has taken much firmer shape over the last couple of years. To move the strategy forward, holistically, Morvan created a company “Green Team” two years ago, after seizing inspiration from a Curzon Cinemas idea in a previous CJ Green article. Morvan identified that after the last couple of years, a recent “turning point” has come about for the company in terms of its relationship with sustainability, and advancing this cause has now been brought from the fringes into their core values.

Managing a Large Estate
In order to develop and improve Vue’s sustainability strategy, Director of Operations, Kam Dosanjh is always looking at the evolving social and economic trends around each site, across their European estate, with 225 cinemas spanning nine territories.

While an operator should do everything sustainable within its power, Dosanjh made the point that it’s crucial to have similar conversations, and, ultimately, end goals, with partners and suppliers. To that end, Coca-Cola was highly praised by both Dosanjh, and Odeon’s Adam Nelson, as a proactive, cooperative partner. Further to that, product-wise, Coca-Cola Freestyle was singled out as an energy-saving, more efficient solution to dispensing and refrigerating cinema beverages.

The Simple Things
An easy win for Dosanjh’s team was a change made to Vue’s waste collection system in cinema auditoria, corridors and foyers. Making the decision to stop asking customers themselves to sort their rubbish into the appropriate bins, and instead asking them to leave all waste in the screening rooms, staff receive training on how to sort the waste appropriately then sort it themselves, resulting in recycling rates improving from 45 to 90%.

Nelson added that Odeon has made a similar move, with a “single bag strategy” being sent to the recycling depot where it’s then sorted effectively. Raising another simple measure that can yield energy-saving results, Nelson said that when replacing equipment or products, his team takes this opportunity to install a more energy-efficient replacement, instead of replacing like-for-like.

An almost accidental energy saving discovery for Odeon was in the adaptation of nighttime equipment shutdown processes when cinemas experienced the government-enforced closures during the pandemic. Nelson and his team found that tweaking these processes, throughout and post-pandemic, resulted in a saving of 10% in energy costs. Nelson added, however, that on the reverse side of this benefit was that the WHO’s fresh-air circulation requirements due to COVID-19 meant an increase in other energy costs. Offsetting these increases, either through a company’s own operations or those of a partner or supplier, is necessary to tip the scales back in the right direction, and Nelson stressed that there are ways to do this. Both he and Dosanjh added that, through implementing a variety of measures, some easy wins, others requiring more focus and research, each exhibitor has seen a cost benefit.

Carbon Trust-Accredited
Back in 2015, a sustainable feather in Odeon’s cap was becoming accredited by the Carbon Trust. Those that receive, and uphold, the Carbon Trust Standard “have successfully certified reductions in the environmental impact of their operations and supply chain […] as well as those that have measured the carbon and water footprints of their products to achieve the right to use our Footprint Label.” Through this accreditation, among analysing data surrounding the carbon emissions from their estate, Odeon identified and removed 3000 tons of carbon going into the atmosphere over the last four years.

Morvan echoed the sentiment and value of data analysis by describing Kino Naturlich’s four fields of action – Waste, Resources, Mobility, Film – and by abiding by the principle of “if you measure, you can manage”. Yorck’s Green Team, therefore, can not only identify, but then act upon, which resources can be recycled or reused, or indeed, reduced altogether.

Education & Information Build A Brand
Both Dosanjh and Nelson described, when asked, how sustainability measures are communicated to audiences in order to inform them of action being taken, and that regional sites are responsible for their own “green” messaging. The Milton Keynes Odeon, for example, has a marketing push around the solar panels on its roof and certain water saving methods that are employed.

Dosanjh added that it’s far more authentic for a particular site to communicate specifics with its local audience in this way, rather than a blanket approach from the top down. And this, in turn, helps strengthen links to the local council and community.

Another facet to Yorck’s partnership with Naturstrom does exactly this. Audience members are shown a short video to explain that all facilities are powered through the green energy provider, which as well as informing guests, communicates that any audience members wishing to sign up to Naturstrom’s services themselves – domestically-speaking – will receive four complimentary tickets to Yorck’s cinemas.

Being Green Needs a Team
In creating the Yorck Green Team, the benefits for Morvan and her team were multifold. Not only can the team bounce ideas off each other, share the challenges of sustainability, and find solutions to operational challenges together. But the members comprising the team all span a range of departments thereby possessing different skill sets, including Front of House, back office and technical staff.

In a not-dissimilar way, Odeon’s Corporate Social Responsibility (CSR) team is led by the company’s People Director, at Executive Committee (ExCo) level and is cross-functional across the organisation. An interesting takeaway from this particular topic was Nelson’s point not to slip into “management speak” when discussing carbon emissions but to discuss it in a human, relevant way so that it doesn’t become abstract.

Dosanjh added that the importance of these issues must come from the top down, and that placing specific objectives within each member of staff’s Personal Agreements (PAs) from the top of the company through to casual staff helps to ensure this is kept on track. A strategy, plan and timeline gives clarity to all stakeholders.

An Unexpected Gift
The pandemic caused a lot of distress – but it also provided an unexpected gift: that of time. This allowed all exhibitors to consider current policies, and learn how to pivot and flex to the challenges they were suddenly facing. COVID ultimately accelerated changes that ordinarily would have taken years and has forced businesses into ways of adapting quickly and flexibly. Morvan added that she felt like learning to act with flexibility and speed has been useful to prepare for the larger battles to come against climate change.

Each of the panellists shared a similar future dream – to reach climate neutrality as soon as possible. Let’s just hope, with everything we’ve all learned over the last year, that there’s an acceleration with achieving these goals, too.

The full afternoon session is available via UNIC’s website, which can be watched in full, here.