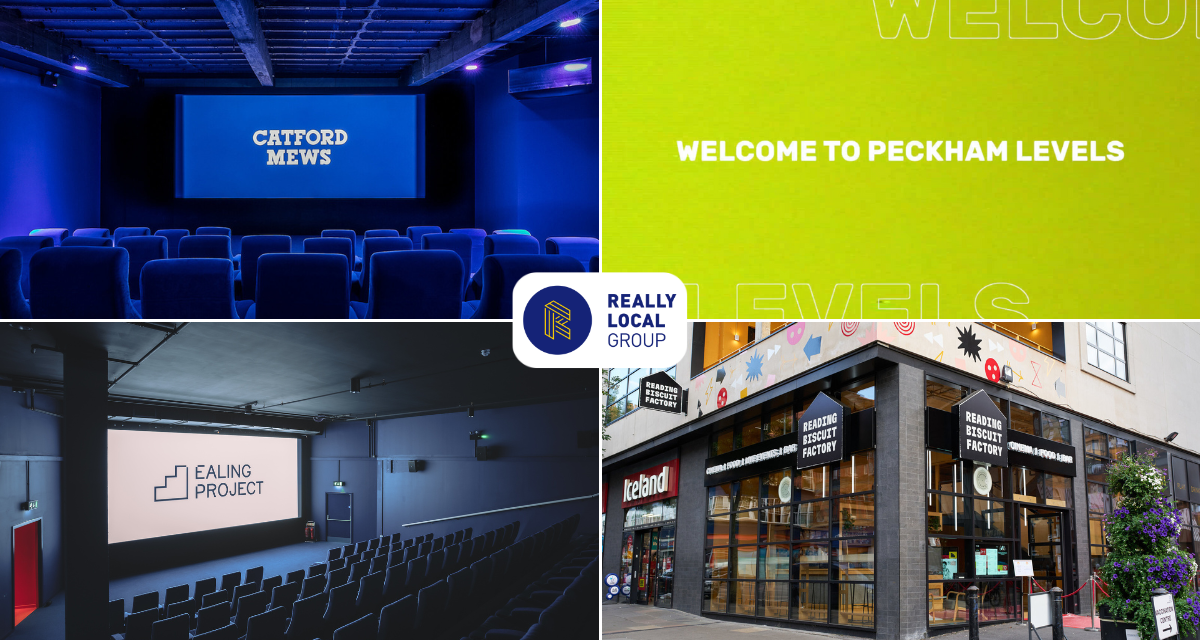 An impressive newcomer on the block, the Really Local Group (RLG) has set about transforming local high streets in the United Kingdom over the last six years. With a current total of four open venues – and a full pipeline of projects ahead of them – their objective isn’t to “just” create a cinema but to create a community hub, thereby regenerating cookie-cutter, and often-full-of-empty-units, high streets.

Founder Preston Benson talked to Celluloid Junkie’s Helen Budge about how it all started and his vision for the future of the company. Answers have been edited for clarity and brevity.

Celluloid Junkie: Tell us about your background and past career.

Preston Benson: I came to London in 2005 with a chartered accountancy firm from Chicago, where I then switched my focus to hospitality and leisure businesses. In 2010, I then began working and overseeing a private family property portfolio, which encompassed many retail, secondary shopping centres. And this is where I foresaw the death of the high street and the need to repurpose, revitalise and reuse these retail spaces which clearly were no longer fit for purpose.

I took my learnings so far, along with my knowledge of the cinema market, and put the two together – how we could make a positive out of a negative, using film and music. And that’s where the Really Local Group came from.

CJ: What was the process for getting RLG started?

PB: I spent a lot of time researching and speaking with people in the industry, people like John Sullivan [Founding Director of The Big Picture Cinema Consultants]. I worked quite closely with a small independent cinema in north London, called the ArtHouse in Crouch End for about a year and a half. And those experiences really helped me to sharpen my mind on the status of things in the industry, like being totally reliant on six tentpole films [from Hollywood] a year. This is even pre-COVID, in 2015-2016 and it didn’t feel like a very sustainable business model.

CJ: Tell us about the venues you’ve opened. What’s the vision or objective behind each of them?

Catford Mews (London) – the vision with Catford Mews was to bring a cinema to Lewisham, which was the only London borough without one. And having lived nearby and spent some time in the borough, you could see the amazing diversity of talent and a real desire to have this cinema on the doorstep. And we chose Catford because it fit the opportunity around regeneration and the council was very supportive to have some new life and blood brought to the Catford Centre. Catford just celebrated its third birthday in the last few weeks.

Reading Biscuit Factory (Reading, England) – sometimes businesses do things really well in London but struggle outside of it so we wanted to leave [London] and do something. Reading was a great opportunity to help regenerate a corner of the Broad Street Mall which had been quite run down and derelict. By the time we opened, the Reading Film Theatre had stopped trading – and the Reading Film Theatre is now based at the Biscuit Factory, so it’s great to bring those communities together.

Ealing Project (London) – when we opened the Ealing Project, the borough of Ealing didn’t have a multi-screen cinema. In fact, when we started our journey it didn’t have a cinema at all so that was an obvious one. Ealing is an unbelievably creative place, and it’s the birthplace of British rock and roll, Ealing Film Studios. So to put a cinema back in the heart of Ealing was a really exciting opportunity, and to be able to regenerate this derelict former club underneath Ealing Broadway was an opportunity too good to miss. We opened in June 2022.

Peckham Levels (London) – Peckham Levels is located in the old Town Centre Car Park in Peckham (south east London), and it brings together seven floors of (over 100) local and independent businesses.

CJ: How do you approach each project?

PB: I have to ask the question: can we create a place that will be used by the community, morning, noon and night, seven days a week? And can we use film and cinema in a way that doesn’t stamp on toes and that has the best chance of commercial success? If we can make a commercially-viable venue then we can invest in non-commercial, more charitable, community aims. There’s a fine balance with what we do for our business – we can only fund our charitable community focuses by being commercially successful.

Understanding what we’re building is critical – does it stack up from a financial point of view? Will it be able to sustain our London living wage employees and the other important things we try to do in our venues? This is our first consideration. Secondly, can the building itself be converted or turned into a modern cinema at a cost-effective price? If those two things don’t add up then we have to say thank you, but it’s probably not right for us.

CJ: How do you decide which specific location or building is right for an RLG project?

PB: From a size perspective, our first three venues were super big 15,000-20,000 square feet retrofitted sites. Our next four venues are much smaller, at around 8,000-15,000 square feet and are all new builds (or modified enough that they’d be considered a new build). Moving forward, our sweet spot for venue size is 8,000-15,000 square feet and that’s how we can drive the best efficiencies. The bigger format venues, unless we have a partner [organisation], can become quite challenging to operate, especially in the current climate. You also have to have a certain amount of ceiling height for the screens. But the way projector technology is going, you can do a lot more with smaller screens as well, and you can put a cinema in most places these days.

CJ: Do you have a favourite and why?

PB: All of our projects have been great fun to do because they’re all totally unique – we’re not a cookie-cutter operator. Each one has its challenges and opportunities. I think the first one you do is always the most exciting. When we started building Catford Mews a lot of people questioned what we were doing. And now that it’s open people can see that why we did it was, and is, obvious.

CJ: What’s the most rewarding aspect of the work RLG does?

PB: Bringing accessible and affordable film and culture to people’s front door. Providing a range of opportunities, anything from a film student exhibiting their work to their local community, to bringing the latest NT Live [National Theatre Live event cinema screenings] to areas that have historically not had access, to the provision of new employment and everything in between.

Seeing different segments of the population, young and old, all enjoying our venues at the same time is also incredibly rewarding… this doesn’t happen that often in 2022, where venues are often segregated by class and/or geography.

CJ: How (else) does sustainability feature in your business model?

PB: We’re working towards not using single-use plastics in the venues, we reuse materials where we can – for example, all the tables at Catford Mews are made from the old spools of cabling [see tables in Catford image below]. And all the seats at Catford were upcycled from a cinema that was throwing them away after one year. We do lots of things around sustainability, and our business model – retrofitting old buildings, rather than knocking them down and rebuilding them – saves an enormous amount of carbon going into the atmosphere.

CJ: What’s in the pipeline for RLG’s next venues?

Bermondsey, London – this is something we’re working on with Southwark Council in the old Thorowgoods store in Bermondsey.

Storyhouse, Sidcup (Kent) – this venue is opening in early 2023 and we’ve been working on this for six years. It’s a beautiful brand new building on the side of an old Blockbuster Video store, which will be a three-screen cinema. It’s going to be co-located with the new Sidcup Library which is super exciting and, again, we’ve had to ask how we collaborate and join forces with the different types of operators and occupiers to create a unique visitor experience.

Throwley Yard, Sutton (England) – we’re working with Sutton Council on this project and we’ve just submitted a planning application. We hope to be onsite early in the new year [2023].

Canning Town, London – there have been some slight delays with this venue on the master plan but it’ll be opening hopefully around early-mid 2024.

CJ: What’s the long term future plan? Where would you like to be in 10-15 years?

PB: I think [with RLG] we’re onto something and it’s not the future for us anymore, it’s the present. We could have 50 RLG venues in the UK and we could be doing this all over the world – there are opportunities all over Europe and in the United States. So when I think about what the next 5-10 years look like, it’s continuing to do what we do but we also think we have a great model and we should be taking it abroad.

CJ: How did RLG survive the pandemic and come out in a strong position?

PB: I think companies in the industry are struggling more now than they were during COVID, due to factors like the irregular film slate and increased utility rates.

But we got through COVID in the way we did because we were small and nimble enough to be able to do so, we didn’t come with a lot of legacy baggage. And because a lot of us [the RLG team] aren’t from the industry we look at things differently so we were able to get under our turtle shell and ride it out, and continue finding sites to grow through. We grew our pipeline through the pandemic. As things transpired that was probably the right thing to do.