Eight months ago Celluloid Junkie explored the impact that the lack of trade shows would have on the cinema business. We speculated that it could be an entire 18 months that the business would have to do without an international cinema trade show and, as it turns out, (as with everything COVID-19 it seems) that was a tad optimistic.

With the COVID recovery underway thanks to the vaccine roll out, it is now possible to think beyond the reopening of cinema doors and turn our attention to some of the “business as usual” elements of the industry. This naturally includes trade shows, and many, many are starting to populate the calendar. But how feasible will it be for exhibitors, and in particular vendors, to have a presence at all of them?

When CinemaCon opens its doors in Caesars Palace during the last week of August, it will be 22 months since ShowEast 2019, the last major convention, held in Miami during October of that year. You know what they say, you wait 22 months for a convention and then several come along at once. And by several, I mean no less than nine in the space of 16 weeks.

It could be quite the world tour: following CinemaCon, Kino Expo kicks off in St. Petersburg, Russian from September 14-17th, just before the congress of the Fédération Nationale des Cinémas Français (FNCF) in Deauville, France from September 20-23rd. You can stick around the European Union for CineEurope, which has rescheduled its summer Barcelona show to the 4th-7th of October. The Australian International Movie Convention follows from October 17-20th, with META Cinema Forum in Dubai right behind it from the 26th-28th of October. You can then head to Miami for ShowEast between the 8th-11th of November before heading due south to Brazil for ExpoCine from the 16-19th of November, and finally over to Bangkok for the first CineAsia show in two years, from the 6-9th of December.

Thankfully for your liver (as much trade show business is traditionally done at the bar), it will be physically impossible to get to all of these conventions. But that doesn’t particularly help the event organisers nor the trade show exhibitors. In the United States, your diary will be helped by all of the regional NATO shows having been cancelled (only the nationwide shows – Show Canada and CinemaCon – remain), due to either COVID concerns or clashes with the major national and international trade shows on the calendar.

Right now, it is impossible to predict what travel restrictions may still be in place. You’d have to be pretty committed to do two weeks in quarantine either side of a four day trade show, as tempting as the Heathrow Novotel sounds.

But there is a bigger issue than the travel logistics. After a year of cinema businesses being in hibernation, it’s not clear that we are quite in a place yet to embrace the trade show aspect of ‘business as usual’.

The cost of attending these events is significant. Depending on your proximity to the event (long-haul flights add further expenditures) you will be spending several thousand dollars on each delegate once accreditation, travel, hotel and expenses are included. In a year where every single area of our business has lost revenue, attending multiple – or indeed any – trade shows costs money that people simply don’t have. Even if they did, it is possibly not the best message to be sending out when staff members have been made redundant (although it should be noted that in the U.S., because of the Shuttered Venue Operators Grant money, some US exhibitors are using a trip to CinemaCon as an incentive/perk for re-hired staff).

Mark Collins, Global Manager for Harman Professional Solutions explained that as a global company, things are doubly hard as they have both the U.S. and international shows to consider.

“I’m having a difficult time convincing people to allow me to move forward with plans that were put in place for last year” he said. “There’s a huge concern about spending a lot of money on CinemaCon, and having very little left over for CineEurope and CineAsia”, said Collins.

No one is for one moment suggesting that it wouldn’t be worth the money – far from it. Our business thrives on the interconnectedness and in-person collaboration. Products will finally have the opportunity to be demonstrated and networking will be a key reason for many companies to send a team.

“It used to be the perfect place to go”, Collins continued. “Instead of spending a lot of money traveling to see many clients, you’d be in one place and have all of your meetings there.”

However, it is likely that many companies will be sending fewer delegates for financial reasons, and to ensure that there is someone still running the business back home after a year of inactivity. Will we see a situation whereby companies send their “A Team” to one event and the “B Team” to another? Vendors are likely to want to meet with decision makers.

Collins himself will be there for all shows, but as for Harman having a big presence everywhere – maybe not. “I may be having meetings by myself in the hallways of the hotel” he only-half joked.

There may, however, be a solution on the horizon for vendors. “You may see manufacturers teaming up with one another to share booth and demo space,” Collins predicted, which would reduce costs and therefore open up more opportunities to attend shows.

When checking in with Tim Potter on CinemaNext’s travel plans, he informed me that trade shows are “still an invaluable part of the industry’s yearbook” and so you will be certain to see CinemaNext, a market leading cinema integrator, attending at least some of the shows. This is despite several exhibitors Potter has spoken to not being prepared to pay to go, “They feel that flights, hotel costs and expensive dinners would not be appropriate this year.”

Potter anticipates that by the autumn cinemas will be open globally with minimum social restrictions, so it will be a very busy time for their exhibitor customers and therefore CinemaNext. The bad news is – as alluded to earlier, “combining business priorities at home with visiting all the trade shows is going to be a challenge for everyone”. It is entirely feasible that the clash of CineEurope with the long awaited Bond film in many markets is going to have as much of an impact on attendance as the financial considerations.

“On the flip side,” Potter continued, “there is an opportunity too; we need to think about the future of exhibition and how we evolve as a sector post pandemic – we can only do this by sharing and collaborating through creativity and innovation – so trade shows are a good platform for this.”

With the post-pandemic recovery just beginning Matthew Baizer, the Chief Operating Officer of the Flix Brewhouse chain in Texas, believes this is an excellent time for the industry to come together. “Trade shows, with some tweaks in their model to allow for an interactive dialogue, are a great place to start a constructive discussion between exhibitors and distributors,” said Baizer. “To date, only major exhibitors have been in discussions with the studios and smaller exhibitors are expected to just follow the lead. With everything else changing, why don’t the studios change that mentality as well and have open discussions with all exhibitors?”

He’s not wrong. There is a real opportunity here to start having the difficult conversations about our sector that COVID has unearthed, and how we can take the cinema business forward. In fact, it would feel like an entirely missed opportunity if we didn’t. Collins agreed, “There perhaps needs to be less of the studio ‘showmanship’ and more of a frank conversation between vendors, exhibitors and content creators to find a better model that works going forward, and to help exhibitors find their new niche”.

To put it bluntly, since the last trade show, films not meant to be premiered on the small screen have done exactly that. We cannot ignore the last 12 months, and must work together to find a route forward that works for all parties. Less studio “showmanship” may make the week less appealing or valuable to the delegates that turn up solely for that reason, however there is the bigger picture to consider here. As much as everyone would like to go back to “normal”, things have moved on permanently. We cannot ignore it.

Indeed, Baizer wants to address the big issues head-on. “What better way to encourage trade show participation by exhibition than to derive a format to get the hard work done that needs to happen for exhibitors and distributors to move forward in a partnership that’s fair for both sides?” he suggested, before providing some concrete talking points. “If we are ever going to get a deal done, it’s going to need a framework that includes limited exclusivity for exhibition, shorter holds for studios, more films in wide distribution, sensible consecutive play rules where exhibitors don’t need to show a G movie at 10:30 pm in the evening and finally, a financial arrangement that makes sense. All of these are great topics for an interactive discussion, and where is better than a trade show to foster that environment? And of course, where exhibitors go, vendors follow.”

It’s been a hellish year for the organisers of these shows as well as exhibitors, vendors and distributors. No part of the cinema ecosystem has escaped unscathed and there is real pressure to make these shows finally successful. By all accounts, numbers in the main auditorium are going to be capped which means that the challenge of fewer delegates (and their accreditation fees) will be met head on with studios and distributors presenting their content for fewer eyeballs on screen. Although according to one company I have spoken with, the presenting slots cost the same as they always did. 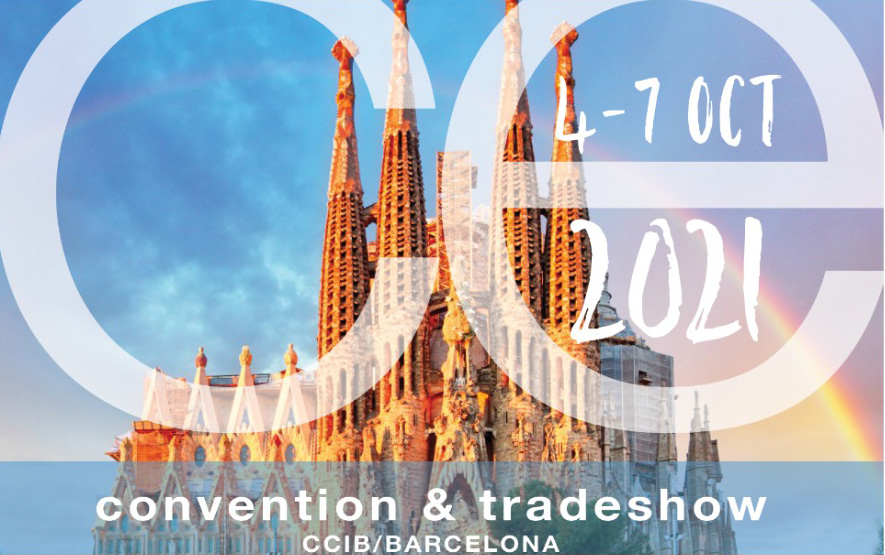 The problem could therefore become cyclical. Without distributors signed up, fewer delegates will attend. With fewer delegates attending, studios may choose not to present (we have already seen Sony side-step presentations in the past few years). However, this could also be the year that everyone pulls together for the collective greater good and shows support in every way they can. Time will tell.

The challenges the trade show concept faces this year are real, but we also have something huge going in our favour. After being shut for longer than anyone could have anticipated, we are as an industry, bruised but not broken. Things have changed, and things still need to change. Fortunately, we have the opportunity to collectively do this – and the willingness to. No one has gone down without a fight (and, thankfully, very few have gone down at all).

It seems that there is a collective view that we need to start somewhere with trade shows although timing, presence or content in 2021 may not be perfect. However there is a willingness to support from most parts of the industry. “We don’t want to see another Zoom show”, commented Collins. “They are well intended but don’t really work”.

There is a growing realisation that the sector needs some re-investment: innovation and resources. The cinema experience has survived against all odds and it is our duty to safeguard it for another 100-plus years. That will take a bit of risk taking and collaboration, and towards the end of the year we are being gifted that opportunity. Let’s make sure we use it wisely.

UPDATE: This article was changed on 21 April to reflect the fact that CineAsia will take place in Bangkok, Thailand and not Singapore.