The success of cinema releases in China over the Spring Festival (aka Chinese New Year) was a shot in the arm for the global theatrical business and proof that audiences are prepared to flock back to cinemas, once they feel safe and tentpole titles are released. Total BO in China in February reached CNY 12.2 billion (USD $1.88 billion), driven by the success of local titles such as “Detective Chinatown 3” over the five-day festival. The success also drove up the share prices of several Chinese film and cinema companies, such as Jinyi Film, Shanghai Film, Wanda Film, China Film Group, and Zhongshi Media. Yet after the initial euphoria, questions are now being asked about whether this was a temporary blip or the cinema market has truly returned to a new normal. There are several dark clouds ahead, even as the rest of the world looks on with envy.

The most comprehensive overview of the challenges ahead for the Chinese cinema industry were outlined in Sina Finance, which took a deep dive into the figures and trends underpinning the Chinese cinema recovery, under the headline “Is the Chinese New Year market’s total box office of over 7.8 billion on the cinema reopening anniversary just a flash in the pan?” It points to both new factors, as well as structural problems in the market, several of which have been highlighted on this site in previous years. The article notes that, “movie watching has become a Spring Festival custom in China, rather than a daily habit.” It compares the 3.5 average annual cinema attendance in China unfavourable to the United States, where it was closer to five time per year in pre-pandemic times.

Chinese cinemas may have reopened, but the pandemic and lockdown in 2020 has lefts its marks on the business. The boxoffice for the whole of 2020 was less than half of the previous year’s and thousands of screens were forced to close permanently – even though the overall number of cinema screens still grew last year in China. Chinese media is full of stories about cinema operators unable to pay rent or staff and forced to seek other jobs. Wang Cheng, the projection manager of a theater in Changping, Beijing, has never been as busy as the cinema was during the recent festival, but also believes that “this kind of market cannot last. After the Spring Festival, the theater will soon be deserted.” 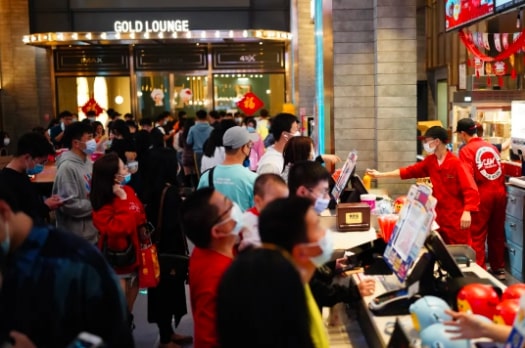 The success of the Spring Festival BO is not just attributed to the release of postponed local tentpole titles, but primarily to the increase in ticket prices and also the government urging Chinese citizens not to travel home to their families but to celebrate it where they live. This seems backed up by statistics collected over the holiday.

According to the statistics of Maoyan Professional Edition, although the number of screenings during the Spring Festival in 2021 has dropped by 1.9%, the total number of movie viewers has increased by 21%. Among them, the average ticket price has increased by 9.4% compared to the 2019 Spring Festival stalls. For example, in Haidian, Beijing, the ticket price of “Detective Chinatown 3” is generally around 130 yuan [USD $20], while the ticket price of “Hello, Mom” even reached 680 yuan [USD $105]. The short-lived demand is stimulating the frantic increase in fares.

This is also backed up by the findings of the China Consumers Association Spring Festival Consumption Report. This monitored all aspects of consumer issues and complaints on China’s major social media platforms, primarily  Weibo, WeChat, websites, forums, news sites, etc. relating to all aspects of retail and services during the Spring Festival. During the period a total of 100,259 pieces of negative information related to “movie watching services” were collected.

The daily amount varied greatly, with an average of about 11,139 posts per day, peaking on 15 February. Complaints related to high ticket prices, but also safety aspects of cinemas, such as high levels of carbon monoxide in a cinema in Zhejiang, where several people had to be taken to a hospital. Cinema managers were open about the fact that when they opened pre-booking of tickets for the Spring Festival they saw a sharp spike in demands, which led them to increase prices. Even then they did not see a drop-off in demand, so further price increases were implemented. Cinemas responded to the criticisms of the price hikes by promising that ticket prices would return to normal after the seventh day of the holiday. In other news there were also complaints about restrictions relating to bringing in food to cinemas, the extra charges for 3D glasses, as well as problems with refunding tickets booked online.

If there is an extra layer of good news related to the Spring Festival boxoffice, in addition to the strong BO numbers themselves, it is this: “Social Survey Center of China Youth Daily and the Social Survey Center (wenjuan.com) conducted a survey of 2024 respondents, showing that 88.7% of the respondents are satisfied with the epidemic prevention measures in the cinema, and 78.0% of the respondents wear a mask throughout the movie.” So while people complain about tickets being expensive, they have no Covid-related fears of returning to the cinema. [This indicates that cinemas in the West might similarly push up prices for blockbuster titles this summer if there is a surge in demand, coupled with capped numbers of seats that can be sold.]

A more worrying problem is the supply chain of future titles, which has already seen the Chinese boxoffice drop off after the holiday. It is not just a case that several major Chinese tentpole titles had their release postponed from last year to this year’s Spring Festival, but that other titles have been moved up. This leaves a large gap in the release schedule for the next two months, with no major films other than Warner Bros’ “Tom and Jerry”. Chinese comedian Shen Teng’s “Super Family” is now not scheduled to open until 2022. Chinese media say that cinemas will thus have to “turn on the ultra-long standby mode,” noting that “Without the excitement of festive customs, people lack a reason to go to the cinema.” 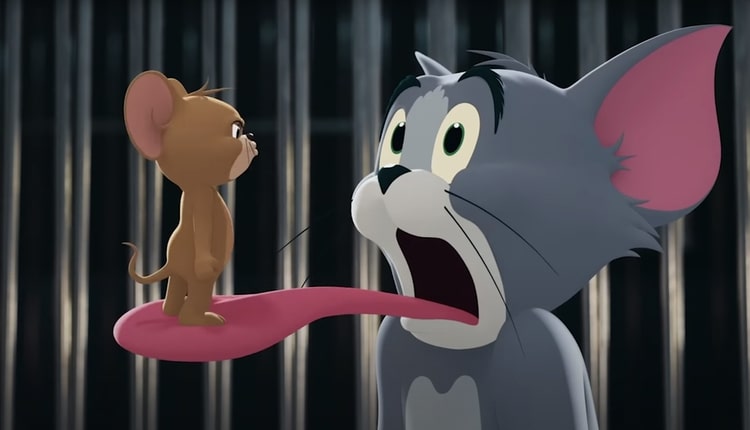 “Tom and Jerry” – the next best hope for Chinese cinemas. (image: WB)

Cinemas have had to pay rent ever since reopening, but have seen the loss of both senior, mid-tier and junior staff, who have shifted to other jobs. There were also structural changes underway before the pandemic that were impacting the cinema business in China. In 2020 there were just 383 films released across China, 229 fewer than in 2019, and only four of these films had a box office of over CNY 1 billion. While daily BO would often cross CNY 100m in 2019, in 2020 after reopening the best result was only CNY 30 million. At the same time, many cinema innovated with new initiatives such as food delivery, renting out VIP auditoriums for birthday parties and wedding shoots, with many cinemas continuing these side-ventures even now.

Last year also saw the formation of the National Cinema Network Alliance, which brought together small and medium cinema operators to form an alliances to fight for better terms from film producers, distributors and vendors. On the eve of this year’s Spring Festival, one of China’s large cine chains announced that small and medium-sized franchise cinemas would have to deposit their BO takings in an escrow account of a third-party company, for fear that they could keep all the earnings. Cash flow is thus tight for a lot of Chinese cinema operators.

While there are major local releases planned for the summer, such as “Mozart in Outer Space” produced by Wanda Movies and “Fengshen Trilogy” produced by Beijing Culture, this still leaves the gap of March and April, before more Hollywood studios start releasing films as well to help fill the post-holiday void. It means that Chinese cinemas could struggle in the post-holiday slump, rather than basking in the glory of being the world’s largest cinema market by BO both last year and this year so far.