Will China Overtake US Box Office by 2020?

The roaring success of this year’s Chinese New Year box office releases has led to renewed speculation about China soon overtaking the United States as the world’s largest cinema market. Despite the failure of previous such predictions, there is a sense that with Chinese screens now outnumbering those in the US, coupled with renewed box office growth and several stand-out hits, this could happen within a year or two. We will examine these predictions, the validity of their assumptions, the underlying trends, survey the cinema landscape and give our own prediction. For those that have followed our previous Cassandra-like warnings about over estimating the growth potential of the Chinese market, the conclusion might surprise you.

The most important Chinese festival of the year (variously called Spring, Lunar or New Year – take your pick) that marked the start to the Year of the Dog was the biggest ever, taking around CNY ¥5.7 billion (USD $900 million), with several major domestic hits including “Detective Chinatown 2”, “Monster Hunt 2” and “Operation Red Sea”. The strongly patriotic “Operation Red Sea” (think “Black Hawk Down”) has since gone on to become the second biggest Chinese hit of all time, only behind the no-less pro-China action film “Wolf Warrior 2” (think “Rambo 2”).

It wasn’t just the festival period that was big but the whole of February set a global record with CNY ¥10.1 billion (USD $1.6 billion) worth of tickets sold (259 million tickets) at the mainland box office. This is a global record in terms of monthly sales for any single market, and, yes, that includes the United States. Significantly it was achieved with almost no Hollywood films being permitted during the so-called black-out period. Marvel’s “Black Panther” was the first Hollywood release and did better than expected, overcoming fears of Chinese cinema goers not embracing a majority-black cast action film, to the tune of  USD $66.5 million opening weekend, making it the largest international territory, with UK second at USD $55.8 million.

The pro-patriotic mood is partly being drummed up to support the constitutional amendment to abolish presidential term limits and setting up Xi Jinping as President for life, while also strengthening the grip of the Communist Party, by abolishing media regulator SAPPRFT and putting it under direct control of the cabinet. The propaganda film “Amazing China” just became the biggest documentary cinema release of all time in China with CNY ¥270 million (USD $42 million) in ticket sales – no doubt helped by mandatory screenings and attendance by government employees.

Given such dizzying statistics it is hard not to be swept up in the mood that China will soon be a bigger film market than the United States, which is what pundits both in China and abroad are (once again) predicting. The first such prediction was made even before the festival period, pinpointing 2020 as the crucial year:

By 2020, China is likely to produce around 800 films each year and the annual box office collection is expected to be around 70 billion yuan (USD 10.6 billion), Zhang Hongsen, deputy director of the State Administration of Press, Publication, Radio, Film and Television (SAPPRFT) was quoted as saying by the state-run Xinhua news agency.

(Interestingly 2020 had been predicted as the ‘overtake’ year as far back as 2012 when an Ernest & Young report made the forecast.)

The roaring start to the Year of the Dog means that these pre-festival predictions are now being revised forward. “As the U.S. film market has almost stopped growing and the Chinese market grows faster than expected, it’s very likely that China will surpass the U.S. to become the world’s largest film market in 2019,” China Film Insider summarised the latest report by Entgroup, which also highlighted that “in February alone, the mainland added another cinema 1,879 screens,” creating a screen dividend. China went from CNY ¥10.7 billion for the whole year of 2010 to CNY ¥10 billion for a single month – how could it not continue to grow and overtake the “nearly stagnant growth of the North American market in recent years”?

The article goes on to argue that cinema-going has now become a “lifestyle” and argues that there is still potential for cinema growth in the north, Guangzhou and Shenzhen, but above all in tier three-to-five cities. There are several films with major blockbuster potential coming up by directors such as Zhang Yimou (“Shadow”) Jiang Wen’s (“Good Prevails Over Evil”), Tsui Hark (“Detective Dee: The Four Heavenly Kings”) and the much anticipated “Mermaid 2” by Stephen Chow. 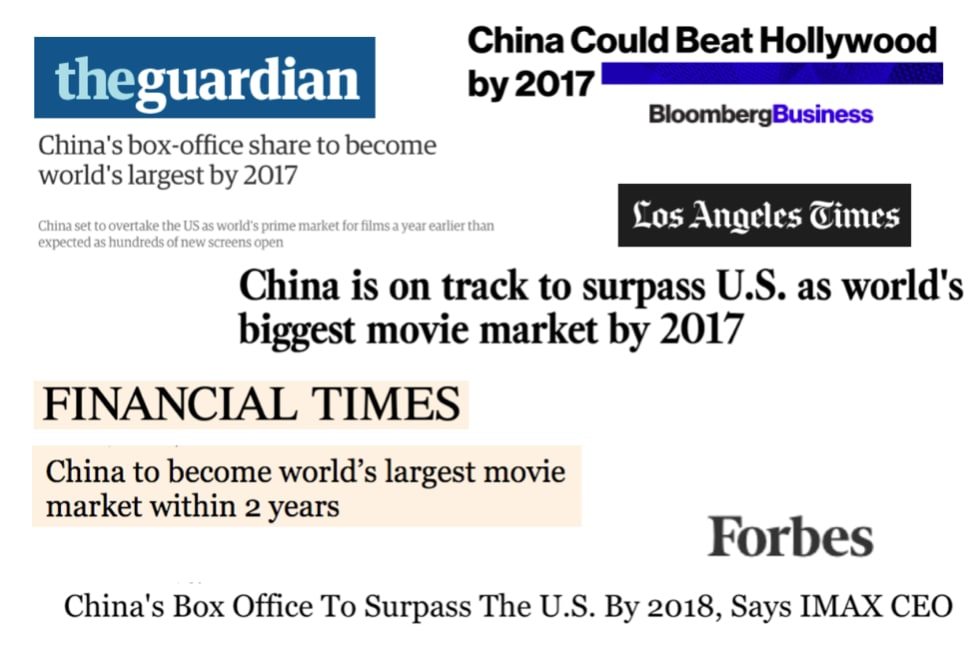 The reason you are not hearing more media outlets making their own predictions about when the size of China’s cinema market will match and pass that of North America is because they have a history of being wrong. Above you can see a selection of headlines from leading publications such as Bloomberg, Financial Times and The Guardian predicting a few years back that China should have become the largest in the world already.

Instead there the bubble burst in 2016 and it wasn’t until the success of “Wolf Warrior 2” last year that confidence returned in the future growth prospects of the Chinese market. But have the underlying fundamentals of the industry changed enough to validate the claim that ‘this time is different’ and that China really will be the world’s largest cinema market by 2020 or even 2019? To understand this we have to do more than look at recent hits, draw a straight line based on last year’s box office performance or even average the growth of the last five or so years.

Fundamentals to Consider for Future

Below are six key fundamentals that need to be kept in mind when looking to the future of Chinese box office. 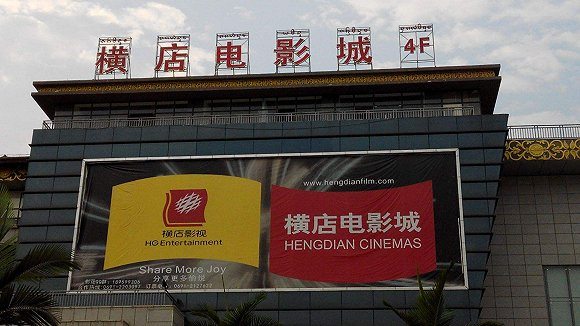 An example of a Chinese cinema operator feeling the squeeze is Hengdian Cinemas, part of the Hengdian Film and TV Group, which is focused on the cinema market in Tier three to five cities. Listed in October of last year it had year-on-year revenue growth of 10.38% to CNY ¥2.518 billion (USD $400 million), but saw profits fall 7.16% to CNY ¥331 million (USD $52.32 million). The situation was even worse in the fourth quarter of 2017. Gross margins for the company have been declining from 2015 to 2017 from 27.67% to 23.93% to 20.69%. But Hengdian is not even a medium or a small operator, rather it is the eight largest in China, meaning that it is bigger than even CJ CGV.

When it comes to theatre investment and building new cinemas Hengdian is even ranked third in mainland China, but the focus on Tier Three, Four and Five cities is not the recipe for success that building in Tier One and Two cities once was. The company’s annual report showed that gross profit margin for showing films was just 4.66%, while for the largest operator, Wanda, it was 15% to 25% as recently as 2014. Hengdian is instead pivoting to popcorn and advertising, with concessions and ads having a 75.24% and 99.98% (!) gross profit margins.

Still, with box office accounting for 80% of revenue, it is unclear whether this will be enough for the long term. In addition to its existing portfolio of 340 multiplexes at the end of 2017, Hengdian has 300 planned projects in – you probably guessed it – Tier Three, Four and Five cities. As Sina Finance dryly notes, “A tier five-city city with a permanent population of only 200,000 certainly cannot support three movie theaters and nearly 30 screens.” 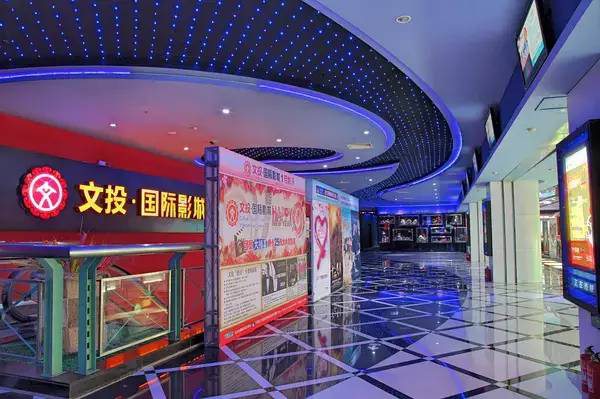 A more promising example is Beijing Guan Yu Cinema Management Co. (Gyuanyu), a consulting company which “with its rich experience in cinema operations and deep industry resources, has made the industry’s goal of improving cinemas in poor conditions in recent years,” says Yule.com.cn and looks at its achievements in the form of Tianjin Wentou International Studios that opened in August 2011.

The cinema’s lobby was  redesigned to “make the audience experience smoother and the functional area division more reasonable” as well as feeling more bright and spacious. Installing laser projection resulted in better quality presentations. “At the same time, Guan Yu paid attention to the cost control of the studio, and adopted a series of management measures such as reducing unreasonable expenditure items, introducing TMS systems, and adjusting personnel structure.” The result was that the cinema achieved a growth rate of 32.1% in 2016, the year that China’s box office overall only grew by 3.22% according to official figures. By 2017 the cinema grew 25.8%, again outpacing the national average of 13.45%.

The future success of China’s box office will thus depend on whether it follows a path more similar to that of Hengdian or heeds the advice of Guan Yu. As of the end of 2017 Guan Yu had participated in the construction of 79 cinemas across nine provinces and 31 cities. It has achieved much, but while the likes of Wanda and Dadi are unlikely to need it, there are more mid-to-small exhibitors than Guan Yu can handle.

Given all of the above factors, it is only in a situation of exceptional circumstances that China will have become the world’s largest cinema market by 2020. This would have to include 2018 being a failed year at the U.S. box office, while all of China’s big hits deliver and we don’t see a repeat of the summer of 2016. At the same time currency fluctuations would have to favour the Chinese yuan over the U.S. dollar even more than it has done during the past year. Thirdly, there must be no ‘black swan’ events, such as an outbreak of a virulent strain of bird flu that could keep Chinese cinemas empty for months (as happened in Korea in the summer of 2017), or any military or geopolitical conflict destabilising the country.

Above all, focusing exclusively on the box office horse race between China and North America often means overlooking the nuances and intricacies of the Mainland market, including changes in tastes, global influences (Bollywood!), creativity, VFX skills and much more. It also means overlooking the inevitable consolidation and painful restructuring to match demand and (over) supply that the Chinese cinema sector will see in the next 24 months, of which Dadi acquiring the Orange Sky Golden Harvest circuit was the first big example. China is a complex and  multifaceted market when it comes to film, television, online video and more within the wider cultural-commercial landscape. Trying to understand it only in relation to how it performs vis-a-vis Hollywood at the box office does it a great disservice.

That said, it is very likely that China will become the world’s largest cinema market in the first few years of the 2020s. However, a lot will have changed by then both in China, Hollywood and the world, which is why industry observers would do best to focus on the journey, rather than at an arbitrary milestone in the unfolding landscape.