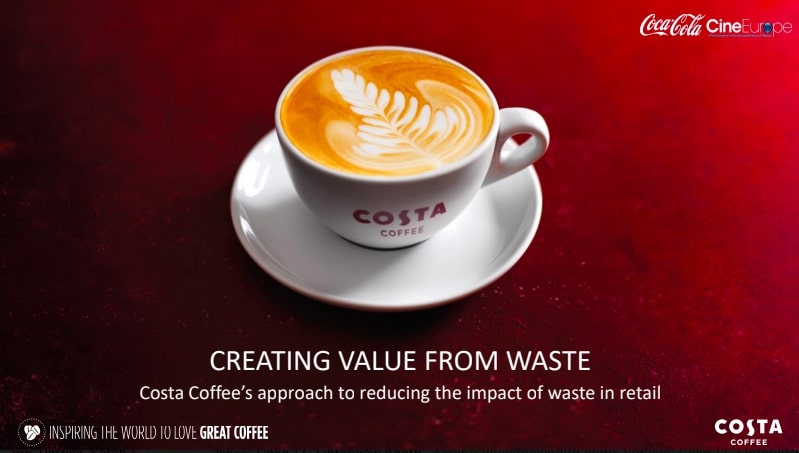 Welcome back to part two of our CineEurope Coca-Cola Sustainability seminar round up. If you missed part one – covering the EU’s directive on plastic waste & marine litter, and Coke’s sustainability initiatives, find it here.

To follow on from Coke’s Sustainability Director Therese Noorlander, Costa’s Head of Environment, Ollie Rosevear, took to the mic to discuss Costa’s views on waste.

Coke bought Costa from Whitbread back in January 2019 and the two companies have wasted no time in accelerating all areas of Costa’s business and the subject of sustainability is a critical part of this new relationship. Costa, like Coke, has similar targets to recycle everything they put out onto the market, invoking the concept of the circular economy – more on this later.

Rosevear began by setting out Costa’s global position – second largest coffee shop brand in the world, number one in the UK – with their famous mocha Italia blend being 100% Rainforest Alliance Certified. This certification, as Rosevear pointed out, happened ten years ago and demonstrates how central sustainability is to the Costa brand.

Rosevear explained that Costa are trying to change the perception of waste to be viewed as a valuable resource. Vast amounts of waste are disposed of daily which have an intrinsic value and could be put back into the circular economy, recycled and reused. He then shared some rather uncomfortable, if perhaps unsurprising, stats:

As a first step, it’s essential to identify where the waste in your business is being created. Without doing this it’s impossible to assess, and then reduce, your waste output. Simply put, it boils down to two questions: “Where are you using the most stuff?” and “Do you need to use what you’re using?”

A particular example Rosevear gave was from CineEurope itself. As he circulated the CCIB he spotted metal, reusable popcorn containers. If that approach were widely adopted by exhibitors primarily as a marketing tool, it would also create a reusable model and would be a move towards sustainability (not to mention a reduction in cost of ordering regular disposable popcorn containers).

A [rhetorical] question for exhibitors came next – how are you segregating your waste? Segregation is a necessity for recycling as contaminated waste is not recyclable. Leaving it to customers though can be inefficient, although it’s still important to engage with them about doing the right thing – but to make it more of an effective process it may be something staff do themselves in-store, a practice Costa does employ.

The first example given was the amount of napkins used in store, estimated at a shocking 0.5 billion annually. The availability of them to customers, being previously placed on condiment stands, meant that if a drink was spilt a stack of napkins would be used to mop up the spillage creating far more waste than necessary. So a simple yet very effective solution was to place napkins behind the counter instead. Still available if a customer should request one (or more) but just no longer visible, the use of napkins went down by 40%. Tying this in to a commercial angle too Costa then saved money on their napkin spend making it not just the right thing to do for the environment, but the right thing for their business to do.

Another impressive example was the swap Costa made with regards to their milk delivery. This may come as a surprise to some but Costa’s water consumption is considerably lower than one might expect. But where they more than make up for it is their milk consumption. Their milk was arriving in HTP bottles which, although fully recyclable, was still extra plastic waste. After talks with suppliers they swapped to using milk pouches, which has reduced their plastic consumption by a whopping 94%.

A smart move by Costa now sees them encouraging customers to stay in store for their drinks where appropriate. The reasons for this are two-fold: one, this has resulted in 60% of drinks sales being in reusable China cups (instead of the well-known Costa takeaway cup). And number two, this makes good business sense – people buy more if they’re in store for longer.

Costa’s approach to their summer drinks range has also changed and ties in with this in-store mentality. Previously, all summer drinks were served in rPet recyclable cups – recyclable yes, but again still more plastic usage that could be avoided – and so anyone staying in store was given glassware to use, resulting in a 45% decrease in plastic waste.

Bring Your Own and Takeaway Coffee Grounds

Not exclusive to Costa but a good initiative nonetheless, Costa offers customers 25 pence off their drinks if they bring a reusable cup – an offer that certainly adds up for those grabbing a morning coffee every day.

And if you ask nicely, they’ll give you their used coffee grounds – they have plenty – for free. Good for gardening (great for growing mushrooms, composting and warding off slugs) and a great exfoliant (any replacement for microplastics is a good thing) coffee grounds have many little known talents. Rosevear then emphasised again, using the coffee grounds as a pertinent example, that we need to see value instead of waste.

And so back to the famous Costa takeaway cup. There’s a public perception, due to the cup’s plastic inner coating, that it can’t be recycled. Costa saw this as something they needed to address and so engaged with the paper industry in detail to fully understand the make up of the cup and its disposal process. 40 tonnes of cups were sent over to Germany to prove they could be recycled in a standard mill, resulting in the knowledge that the UK has the capacity to recycle more than the number of Costa cups currently being put out into the market.

Being a coffee company Costa have more than enough coffee grounds to go around. Being a pure waste stream (they’re emptied into a “knock out drawer” that isn’t used for anything else), the grounds – minus any requested by customers – are then sent to a company called bio-bean. Here they turn the grounds into pellets which then go to biomass boilers to generate energy. And a further clever development from bio-bean sees the extraction of the coffee flavour from the waste grounds to then be used in food stuffs as flavouring. In turn, this increases the value of this waste product in a sustainability sense, but also a commercial sense.

Rosevear then turned to how Costa views its responsibilities. One big aim for them, similarly to one of Coke’s objectives from earlier in the seminar, is to recycle the same number of cups that they put out onto the market by 2020. This has been facilitated by Costa creating and funding a scheme in 2018 that incentivises waste contractors to recover cups on Costa’s behalf. Contractors are already given a fee for waste collection so this scheme sees them compensated on top of that current fee, allowing them to now commercially offer cup recycling in places like offices, shopping centres, train stations.

Rosevear echoed the collaboration sentiment running through the whole seminar, with some encouraging news. Several big names from the UK high street are now engaging in cup recycling as cross-brand recognition that this is a worthy exercise. Names on the list, as well as Costa, include McDonalds, Pret-a-Manger, Caffe Nero, Greggs and Burger King.

“Responsibility” can be interpreted in different ways. But even in a more basic sense of the word, Costa takes their responsibility towards the community seriously as demonstrated by their UK-wide litter picking initiative, from stores up to HQ. Previous Managing Director Jim Slater particularly got into the spirit on one of these litter picks, physically getting into a bin and then resulting in an infamous picture of him aptly titled “Jim in a bin”. This sense of top-level camaraderie had the effect of encouraging employees to get involved and saw the litter picking initiative go from 100 stores up to 800.

As the circular economy demonstrates, the conclusion of the seminar brought us back to Coke’s Oli Delaney for his closing words. Delaney expressed that the question should now no longer be, “Should we take action?” but, “What’s the risk of not taking action?”. Should it be left for another five years with no significant movement, the damage to brands’ reputations (and the planet) will be huge.

Indeed, Delaney made the point that an in-depth sustainability plan for a business can lead to long term savings. This argument is also supported by Carmen Slijpen, director of Depot Cinema in Sussex, UK, which is in itself an incredible cinema bringing a green agenda to the forefront. Slijpen argues that the upfront costs can be substantial but that, over time, significant savings are made. (Check out CJ’s profile of Depot Cinema).

And finally, a further reiteration of the needed industry collaboration (I think they really mean this, guys). Delaney then explained Coke and UNIC’s plans to create a Cinema Industry working group focussed on sustainability, similar to the retail group that has been in operation for many years. The idea being that best practices both in and out of cinema are shared, packaging experts can share their knowledge and a forum is created for trialling and testing. The group will aim to create a framework for exhibitors to refer to, in partnership with UNIC to shape an industry vision, and then proactively sharing progress and achievement of key milestones along the journey.

Despite the sheer volume of content – no bad thing – there was still time for a quick Q&A.

First up: “How do we enlighten and inform people about the need to take action?”

For this first question, a common theme in the various responses from the panel was to keep it as simple as possible, while connecting with the consumer about how and why to try and change habitual behaviour. An important point raised by Noorlander was to ensure that sustainability is communicated positively and Houlgatte expressed that we should all be embarking on this journey together.

The next, and final, question, specifically directed to Ollie Rosevear, was from yours truly, Helen Budge at Celluloid Junkie: “I used to waitress and although the company’s procedure on paper was to recycle, none of the staff bothered. How does Costa communicate this with and educate their staff to ensure everyone’s following head office protocol?”

Rosevear started by outlining that out of the 20,000 employees Costa has, the generally accepted view is “a third, a third, a third”. This means that a third of employees are fully onboard and passionate about the sustainability cause. The next third are aware of it and agree it’s the right thing to do, even if the passion isn’t quite there in the same way. And the final third aren’t very engaged with the cause.

Costa pride themselves on being storytellers and so therefore see it as a necessity to communicate the importance of their values to their staff in this way. By creating actual products from recycled coffee cups it demonstrates a more concrete objective and narrative. An example of this is the manager’s conference manual – completely made from recycled cups – and 20% of the iconic yellow Selfridge’s bags.

To conclude as simply as possible, there were two main points to takeaway from the seminar: we need to work together and we need to act now.