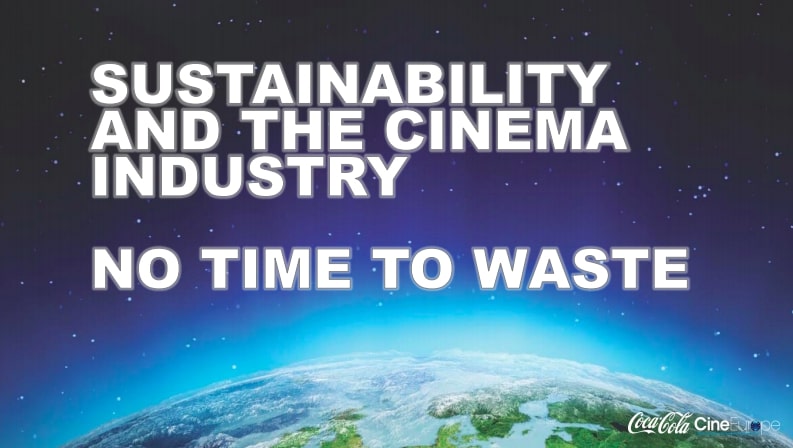 Part One – No Time To Waste

Despite CineEurope 2019 now seeming like a distant memory, sustainability is a topic that doesn’t lose relevance (also see: Celluloid Junkie’s new regular feature CJ Green). The Celluloid Junkie team attended the second seminar by the Coca-Cola Company on this very topic and, in the lull of summer holidays, here’s a look back at the important content of that session.

A key message from the off, introduced by Delaney and reiterated throughout by other panel members, is the urgent need for collaboration. Manufacturing & retailing brands and consumers alike all need to work together to take real action in this area, an area that for once isn’t – or certainly shouldn’t be – viewed as competitive. Coke take a strong stance on their environmental impact and they’ll continue along this path because it’s fundamental to their business. But without collaboration across the board, from consumers and other companies, it will be a long and far less successful journey.

As Delaney pointed out, consumer sentiment is changing. 75% of younger generations expect, and are now demanding more action from big companies like Coke – and it’s refreshing (no pun intended) to see that Coke really are listening and acting. Younger consumers are less loyal to particular brands but instead want to see companies they buy from showing their social consciousness through action and taking an ethical stance on issues that are important to them.

And after all, as Delaney put it, “Having a good sustainable business is good for your business.”

Laura Houlgatte then took the mic to give an outline of how the EU’s legislative framework on single-use plastics and marine litter will be brought into action, promising that she would make the intricacies of EU legislation as painless as possible (which she did successfully).

Initially Houlgatte gave some background on how these issues came to the fore within the EU. Back in 2015, all member states agreed to adopt the sustainable development goals that had been agreed by the UN, through both internal and external policies. Later on in 2015, the EU compiled a circular economy package for each member country to work towards. This comprised five sections, and 54 measures, one of which focussed on plastic.

Fast forward a couple of years to early 2018 and the EU directive on single-use plastics was put forward. Houlgatte specifically drew attention to the fact that legislation similar to this can often take anywhere from three to five years to pass through but in this instance it passed from Proposal Publication to Council Adoption in less than twelve months. It was, encouragingly, met with no arguments and full consensus (!)

Houlgatte then shared some particular deadlines that are set for the next couple of years. By 2021, plastic straws, cutlery and cotton buds will no longer be on sale in the public domain. For those who do keep selling these items, they’ll face a rather hefty – and repetitive – fine. 2024 will see the enforcement of products requiring tethered closures, for example, a plastic bottle lid will have to remain attached to the bottle in order for it not to be lost. And 2026 will see the consumption reduction of plastic food and beverage (F&B) containers. This will be done in various ways such as reusable options being encouraged, levies being charged at the point of sale and national targets being set for reduction. But it’s important to note here though, that although member states have to achieve these objectives, the term ‘directive’ means that it’s not dictated how they should achieve them and the method of doing so is completely up to them.

Houlgatte pointed out that certain countries are more advanced than others, already acting upon these deadlines – name-checking France and the UK as two examples – and may achieve them sooner than the dates set by the EU. And particular regions, like Wallonia in Belgium, have already proposed to ban plastic straws from as early as next year.

Houlgatte concluded her presentation by pointing out that, “It’s worth noting that at the last EU election [held from 23-26th May 2019], there has been a significant increase of green parties in the EU parliament. I think we can say that this is an issue that resonates with citizens in the EU and is something that the EU have to deliver on.” Encouraging stuff.

Coke’s Sustainability Director Therese Noorlander then took the stage to talk about Coke’s take on “being green” and, more importantly, what they’re doing about it.

Noorlander began her section of the seminar with some audience participation. She asked two questions in order to see a show of hands. Firstly, “Hands up those of you who worry about the environment?”, and secondly, “Hands up if you’re already working on a solution within your business?”. The first question received an almost full showing of hands, the second less so but still sizeable.

It was this latter point that Noorlander wanted to focus on to show the scope for possible collaboration between businesses. That, in actual fact, it’s something that’s being welcomed by many businesses and should be something that runs through the core of what a brand is. That it should be looped into the full business proposition, not just as a badge of “sustainable honour” located in one small part of the business.

As Noorlander put it, “It’s really about who you are, what you do and how you operate, with maybe a fourth of with whom you cooperate and work together to produce a more sustainable business proposition.”

Noorlander then turned (metaphorically) to Larry Fink, CEO of BlackRock, who publishes a letter each year to S&P 500 CEOs. 2018’s was entitled, “A Sense of Purpose” and highlights how Fink believes the financial sector should not only be focused on their financial performance but that they should be considering their social impact. Because being sustainable is, quite simply, good for business, echoing Delaney’s earlier sentiment. Fink’s letter demonstrates quite clearly how the financial sector is getting behind ESGs – Environmental Social Governances.

Over the last 12-16 months, Noorlander acknowledged that a lot has changed. Instead of just asking how the company intends to create new revenue streams, Coke’s investors now ask, “How are you being more sustainable? What’s your long term plan? Who are you working with?”

She emphasised that one of Coke’s priorities is being transparent. Despite customers demanding more from them as a company, they don’t always see the steps Coke carry out or the solutions they create in terms of being more eco-friendly and so transparency is key to demonstrating these initiatives. A step towards this is Coke’s annual report, published earlier this year for 2018, that for the first time ties together the progress of their business while integrating this with their sustainability plan. Unsurprisingly, it’s called the Business and Sustainability Report.

Noorlander sees the demands and expectations of customers as being an excellent business opportunity. But it actually can prove to be a challenge, visibility-wise. As she says, customers want them to do a lot and are quite vocal about it but don’t always see their full range of achievements. Hence why Coke places such value on transparency wherever possible and has set crystal-clear targets for themselves and their packaging output, as well as their other global commitments.

At the start of 2018, Coke came out with “A World Without Waste”, which was preceded a few months earlier by the launch of “This is Forward”, a sustainability action plan for Western Europe. For every market Coke operates in, they have clear objectives set out in terms of packaging and these are set around the principles of “design”, “collect” and “partner”. An example of “collect” would be that by 2030, they aim to collect and recycle the equivalent of every bottle or can they sell globally. In Western Europe the intention is to achieve this a full five years earlier by 2025. This target is based firmly in the principles of the circular economy and so the aim is that collected packaging will be recycled back into new packaging – which also means it must be made of fully recyclable material, another target Coke has.

Some Examples of Coke’s Work

Noorlander began by talking through a recent interactive idea that Coke put into practise. Innovative angles are needed to avoid making sustainability boring and “preachy” so an engaging activation called “Battle of the Flavours” was created. Based around two new flavours of Fanta, they provided free samples and asked participants to “vote” on which flavour they liked best by disposing of their bottle in the relevant, signposted bin. Not only did customers get to try a new product while giving their opinion but they also were asked to consider the process of waste disposal more thoroughly.

The benefits of this were at least two-fold for Coke: all packaging was returned to the brand ambassadors instead of becoming litter but customers were also providing direct feedback about the products. Priceless.

A community education programme, Mares Circulares is a Spanish Coca Cola initiative all about working together and with local fishermen to physically clean beaches and the sea. A great way to teach youngsters about separating waste for recycling purposes but also to show them how we as humans can affect our natural environment, both in good and bad ways. Bringing communities together in this manner demonstrates how humanity needs to collaborate more and how Coke is taking its corporate responsibilities seriously.

How can one avoid mentioning the clever Benelux campaign? In an unusual twist on an ad campaign, the white words splashed across a red background read: Don’t Buy Coca Cola. This is then followed by slightly smaller white text that reads: If You Don’t Help Us To Recycle.

Some versions of the ad show a giant white arm and hand joining together in a caring pose, holding a bottle of Coke. But others, cleverly, show the arm pointing visually across the billboard which, if you follow it, literally points you to a carefully placed recycling bin situated underneath the advert. Coke bottles also contain the same recycling information, delivering their message right into the hands of their consumers and the bottles can even be scanned to see where the closest recycling point is.

To end on a cinema specific example, Noorlander explained how a Netherlands-based initiative saw Coke partner with Pathé and others to devise a method of getting bottles returned to staff in cinema sites around the country. The result of the collaboration was Petman, a recycling superhero who manifested himself in a digital advert, played before the feature with his own cinema-worthy jingle and recycling agenda. Specific Petman figures (bins) were placed around the various cinemas for consumers to use before and after their chosen film.

Noorlander ended Coke’s impressive roster of examples and initiatives by once again echoing Delaney’s initial sentiment – collaboration is needed. As with Pathé, Coke are ready and willing to do what they can as a big corporate entity. But they don’t pretend to be able to do everything on their own and ultimately every business, big and small, needs to take responsibility for their own actions – or lack of action – and the resulting message they’re sending out into the world. Coke certainly make a compelling argument for connectivity, within a business and with other businesses, being the way forward.

Join Us Next Week For Part Two

Check back next week for the second half of the seminar. As you’ll be able to tell thus far, the seminar was an impressive, in-depth look into this vital issue and so content was plentiful. Next week we’ll look at Costa’s initiatives, plus a conclusion from Coke’s Oli Delaney and a quick Q&A session.