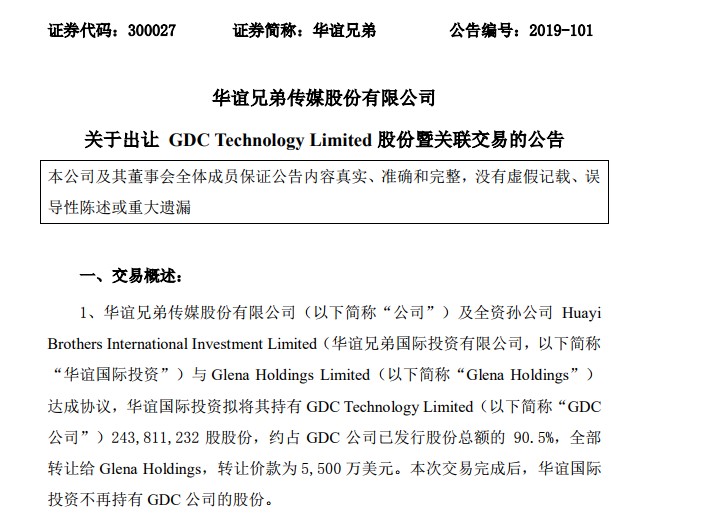 Chinese-language media reports that Huayi Brothers is selling its 90.5% stake in GDC Technology, the leading Asian cinema server and equipment vendor [PDF link to financial filing here]. Huayi announced on 3 September that it’s wholly-owned subsidiary Huayi International Investment plans to transfer all of its holdings of GDC’s 243,811,232 shares to Glena Holdings for USD $55 million. Once the transaction is completed Huayi will not hold any shares on GDC Technology. Huayi faced losses of CNY 200 million (USD 42 million) in the first half of 2019 and is in the process of disposing non-core assets.

Despite GDC Tech being profitable, Huayi is reported to be making a significant loss on the sale, with the sale price of CNY 390 million (USD $55 million) representing a loss of CNY 147 million (USD $27.5 million). According to Chinese media, “Huayi Brothers said in the announcement that the sale of GDC company equity is the company’s optimization and adjustment based on the overall market environment, industry cycle adjustment and its own development.”

It goes on to quote Huayi as saying,  “This transfer of GDC shares is conducive to optimizing the integration of company resources, improve asset allocation efficiency, the funds transferred from the share transfer can be used to supplement the company’s liquidity, etc., to better support the company’s main business development strategy.”

According to New Lvjie, Glana Holdings “is the 100%-controlled company of GDC’s founder and director Zhang Wanneng”, better known as Dr Chong. GDC Tech most recently participated in the BIRTV convention for cinema in Beijing, as well as Big Cine Expo in Mumbai and was involved in the launch of the Cinity technology partnership wirth Huaxia and Christie Digital in Shanghai ahead of the opening of Paramount’s “Gemini Man”.

Earlier this year GDC equipment was implicated in the largest-ever piracy ring broken up in China, with questions raised about the security of the equipment. However, the sale of GDC is more likely to do with the problems Huayi Bros has been having with its film, television and online divisions, with its entertainment division having revcenue of just over a billion yuan (USD $139 million), which is down 47.71% compared to the same period last year.

Celluloid Junkie contacted GDC Technology for a comment, but at time of publication had not yet received a reply.