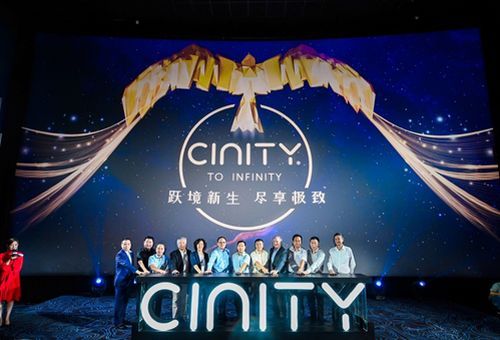 A CINITY version trailer of ‘Gemini Man’, a new movie produced by the internationally renowned director Ang Lee, also made its debut, providing the audience a sumptuous and vivid audio-visual feast.

Technological advancement coupled with the deepening fusion of science and art has continuously been driving the upgrade of the film industry. Film directors and photographers also look to apply new technologies into film production.

Ang Lee, whose work is known for its exquisite emotion and profound atmoshere, has won two Oscars as Best Director at the Academy Awards. After ‘Billy Lynn’s Long Halftime Walk’, he embarked on a journey to produce ‘Gemini Man’, which uses 4K, 3D and 120fps to deliver the impact of its artistic presentation with maximum effect. The CINITY projection system, being a perfect match with the technology used to shoot Gemini Man, brings out the unique features and artistic expression of the movie accurately and perfectly to the audience.

At the event, the CINITY trailer showcased clearer images, truer to real-world colors, and smoother motions, offering a more immersive film-viewing experience to the audience and enabling them to discover the unique artistic expression and charm of this advanced-format cinema.

In today’s streaming media era, the CINITY film incorporates multiple advanced technologies which can significantly enhance the viewing experience and value of a movie and break the boundaries of traditional films to attract more people to the cinema.

“When filming Gemini Man, we paid close attention to every small detail, trying to create a real-life impact with the help of technology. With the revolutionary CINITY cinema system, we could achieve clearer and truer visual effects with perfect presentation of 4K, 3D and 120fps details,” said Ang Lee, who gave a video address to the audience at the launch event.

“In the future, CINITY will lead the film industry into an unprecedented era of film-viewing. I will work together with Huaxia Film to produce more advanced-format movies to drive the long-term development of the film industry worldwide,” added Lee.

Film directors are looking for technical advances that can help them better narrate their stories, driving further developments in filmmaking. At the same time, manufacturers of projection devices are also dedicated to the upgrading and iteration of projection technology and device to provide a better film-viewing experience. Together, they aim to convey art and deliver their visions in the most perfect way possible to provide the best audio-visual enjoyment to viewers.

Combined with the customized cinema design and strict quality control, the CINITY Cinema System will enable viewers to see every single detail in the images through a truly immersive experience.

“Currently, CINITY has achieved significant progress in product planning and design, project implementation, service operation, marketing planning and pre- and post-stage lab construction. We aim at facilitating the formation of the entire chain of advanced-format film industry – spanning filming, post-production to distribution and projection – through key technological breakthroughs. By doing so, we can help drive differentiation, professionalism and high-end development, as well as promote the upgrading of the global film industry,” added Fu.

— A new journey starts with strong support from partners

With the official launch of the CINITY brand, the CINITY Cinema System is now available to the global market and will be installed in cinemas.

In addition to the investment in projection devices, the CINITY Project will amass resources and manpower to produce films, including filming and post-production, to ensure the support for advanced-format movie programs.

Huaxia Film has already established a CINITY Film Lab, inviting related film organizations and well-known professionals at home and abroad to participate in the construction of its lab as well as in filmmaking. The lab also aims to nurture talents for filming and post-production of advanced-format movies. Ang Lee was invited to be a consultant to supervise the lab’s construction, and to set up research and experiments in the lab.