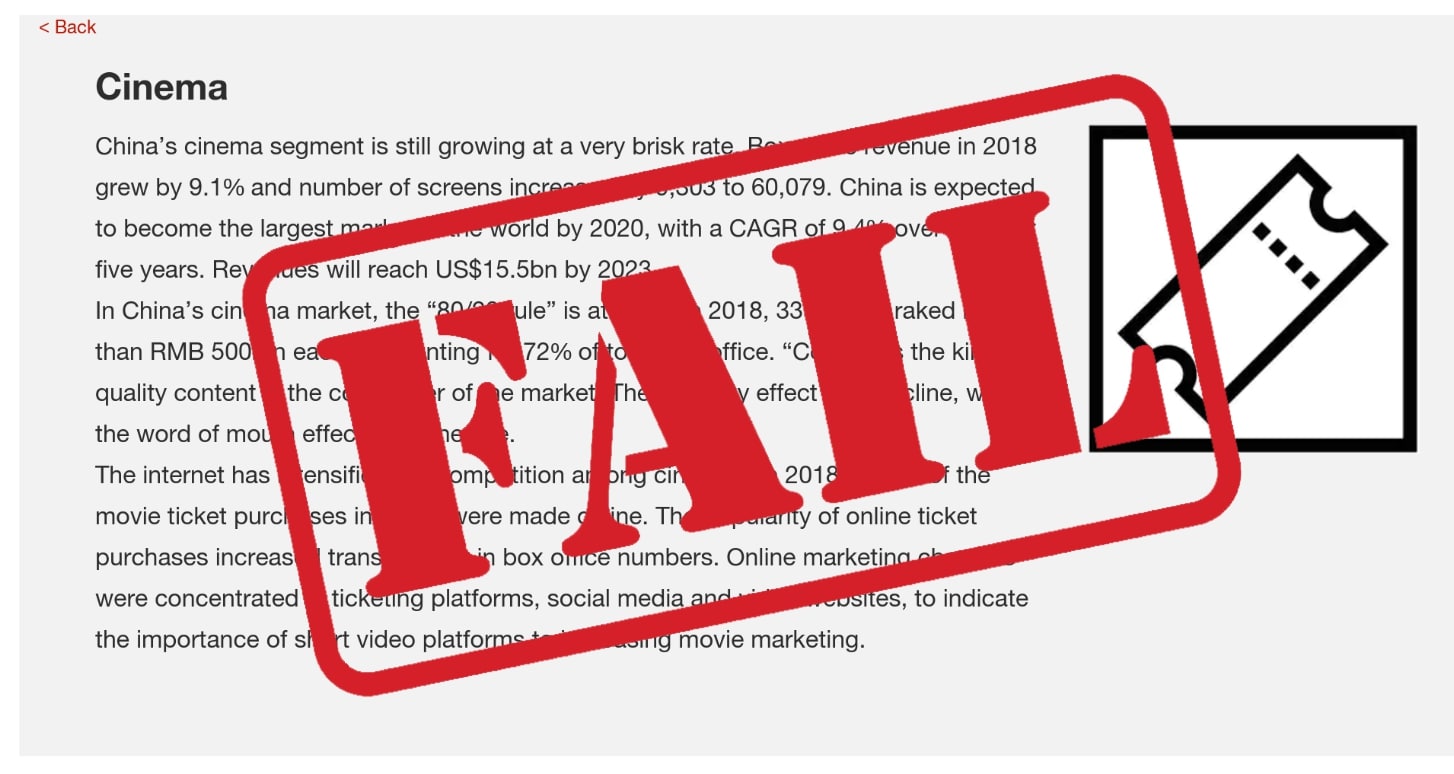 Nobody can deny the importance of China as a cinema market, having overtaken the United States in screen count in December 2016 and has the second biggest box office in the world after North America. Now consultant and audit group PricewaterhouseCooper (PwC) is predicting that China’s box office will overtake North America’s by 2020 in its China Entertainment & Media Outlook 2019-2023. Except PwC predicted the exact same thing in 2016, and it looks set to be just as wrong this time. So just what is it that PwC keeps getting so wrong?

Past Performance ? Future Results
Past performance is not indicative of future results, is emblazoned on every mutual fund prospectus and investment disclosure, but seems to be an alien concept to the China media analysts at PwC. Looking at the numbers and charts presented by PwC it is hard to escape the feeling that they were  using the “extend-the-upward-trending-line-for-X-years” school of analysis when it comes to the future. Below is the chart that PwC published in its 2016 report that predicted China’s box office would exceed that of the US by 2017.

China’s cinema and box office growth between 2011 and 2016 was indeed explosive, growing from just over USD $2 billion to USD $8.3 billion. PwC predicted that China would keep adding just under USD $2 billion each year between 2017 and 2020 for compound annual growth rate of just over 19% in the period 2015-2020. And, sure, China is still under-screened compared to mature markets like the U.S. So why shouldn’t it keep growing as the economy grows and a growing number of people move to the cities and join the middle class?

Except things are never that straight forward. The year after PwC made its prediction, not only did China NOT overtake the U.S. (or North America) box office, but it suffered its worst cinema year, with Variety reporting that “China Box Office Crawls to 3% Gain in 2016“. PwC had predicted that cinema in China would grow 32.9% in 2016, before overtaking the US the following year. Yet that year’s official growth in China was just three per cent and it actually fell 3.5% in dollar terms (which was PwC’s preferred way of measuring). As Nils Bohr observed, “it is hard to make predictions, especially about the future.” Even so it takes particular talent to get predictions in the same year so wrong, let alone next year’s or four years down the line.

So it was with a strong feeling of deja-vu that we read the latest confident prediction by PwC, revealed in a THR ‘exclusive’, that next year (2020) is when the PRC will overtake the U.S. box office. Here is how THR breathlessly reported the findings:

America’s reign as the dominant audience for movies will end in 2019, to be supplanted by China. This year, the U.S. box office may end up at $12.11 billion compared to China’s $11.05 billion, according to new projections from PricewaterhouseCoopers. But in 2020, China’s fast-growing sales at the box office will exceed that of the U.S., $12.28 billion to $11.93 billion — and the country will dominate for the foreseeable future.

Never mind that PwC had predicted just three years ago that China would be USD $13.6 billion this year (what’s two-and-a-half billion dollars here or there when you are forecasting?) and over USD $15 billion next year. Ignore those predictions and focus on the bright new and shiny predictions, which draw a completely new straight upward line from the disaster year that was China’s actual box office in 2016. Now China will hit USD $15.5 billion in 2023 based on a “CAGR of 9.4% over the next five years,” instead of 19.053% as predicted earlier.

Because surely this time is different? After all, ““Content is the king” – quality content is the core driver of the market. The celebrity effect is in decline, while the word of mouth effect is on the rise,” the new report tells us. Except rather than growing by 9.4% or indeed growing at all, China’s box office shrunk 5% in the first five month of this year according to China Film Insider. And the biggest drag on the year-to-date was the first quarter, which is traditionally the best quarter because of Chinese New Year (Spring Festival) when the biggest domestic blockbusters are released.

A More Realistic Perspective
Can China’s box office reverse course during the rest of the year? Realistically, no. While there is a strong Hollywood slate, the likely biggest release (“Avengers: Endgame”) has already been and gone, as the “Star Wars” franchise that will most likely lift U.S. box office in 2019 has traditionally under-performed in China. AMC’s CFO predicts “Star Wars IX” could help push domestic box office over USD $12 billion, in line with PwC’s expectation, but at the current trend it is hard to see China reaching USD $11.05 billion. And all this is before any potential retaliatory measure in the current US-China trade war, that has already seen the screening of the last episode of “Game of Thrones” in China sacrificed at the alter of Trump trade tariffs. If Hollywood escapes getting sucked in it will be because Chinese authorities do not wish to hobble the domestic cinema industry further.

It is important to remember that even as China’s box office goes into reverse, the building of new multiplexes and screens is still moving full steam ahead. In December 2018 China’s National Film Bureau even supported this trend in the edict “Opinions on Accelerating the Construction of Cinemas to Promote the Prosperity and Development of the Film Market”. Wanda alone is issuing CNY 4 billion (USD $578 million) to build 159 cinemas and 1,276 screens in 2019-2021. With box office shrinking, static or simply not keeping up means that year-on-year the per-screen average box office taking per cinema keeps shrinking, even as other cinema operating costs stay fixed or go up. Wanda, which controls its own rent, is likely to ride this out, as will other large operators like Dadi, but smaller operators will go under or be consolidated in large numbers.

It thus looks like PwC is not just wrong again about China overtaking U.S. box office next year, but that it once more got the present year completely wrong. This is particularly galling because industry experts in China have been predicting that 2019 will be a tough year for cinemas in China, with repeated echoes of the “Game of Thrones” dire warning that ‘winter is coming’. At the start of the year we predicted a much more modest growth for China to USD $9.62 billion, but even this might be too optimistic. I also wrote earlier in Cinema Technology magazine about a “Challenging Climate for Chinese Cinema“, highlighting that the strongest growth in the sector is for cinema closures and quoting Chinese industry insiders who warn that “2019 may be the worst year of the past decade, but will be the best year in the next decade.” Re-read that sentence and let the implication of that sentiment sink in.

But all of this doom-saying seems to have passed PwC by, whose view of nothing but sunny uplands seem to rival only those of ardent Brexiteers in seeing only positives (9.4% CAGR 2019-2023, to be precise) where others see doom and gloom. It wouldn’t be so galling if we had not been here before, but even before PwC was last predicting China would overtake the U.S. by 2017 as the world’s largest movie market, we at Celluloid Junkie were warning that there was a bubble about to burst. By early 2017 we were proven right.

Last month PwC was fined a record GBP £6.5 million (USD $8.18 million) over “lack of competence.” This did not relate to its China media coverage, but over its audit of the cloud computing firm Redcentric. However, the “serious lack of competence” does seem to extend to its analysis of the present cinema situation in China, never mind the future. Because when it comes to predicting China overtaking the U.S. box office, PwC seems to stand for “precisely wrong call.”

Patrick von Sychowski is the Editor of Celluloid Junkie. Opinions are very much his own.