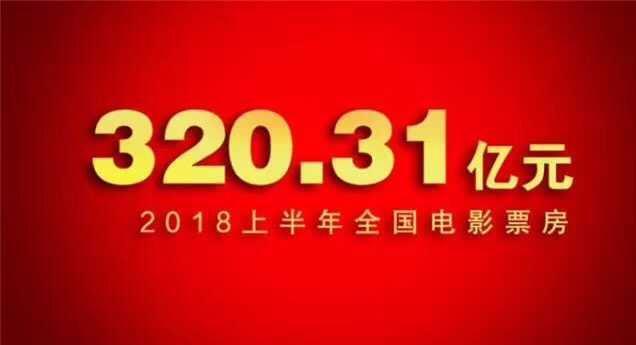 The Chinese cinema industry has seen strong growth figures in the first six month of 2018 – with one critical exception. Box office growth was mainly driven by local titles, while the pace of opening new cinemas showed little sign of slowing down, based on figures released by the National Film Agency.

China’s box office for the first half-year of 2018 was CNY ¥32.031 billion (USD $4.83 billion), representing a 17.82% year-on-year growth. The number of tickets sold was 910 million, up 15.34% from the same period last year. A large part of this growth came from this year’s record Spring Festival (aka Chinese New Year, Lunar Festival), which saw massive hits such as “Operation Red Sea” and “Detective Chinatown 2” and gave China a bigger Q1 box office than the US.

Domestic films were the primary driver of growth throughout the first half of the year, accounting for CNY¥18.965 billion (USD $2.86 billion) of the box office, which is a staggering increase of 80.1% on the first six months of 2017. Overall domestic films made up 59.21% of total box office, thus satisfying the government’s ambition and edict of having local films be the primary engine of cinema growth. Last year Chinese films made up just 38.74% of box office in the first six months, thus now reversing the balance.

In total more than 41 films earned more than CNY¥100 million (USD $15 million) of which 19 were Chinese. However, Sohu puts this figure at 37 films that grossed CNY¥100 million, of which 15 were domestic and 22 were imported, indicating that the greater share of box office was mainly derived from a handful of mega-blockbuster titles.

This is confirmed by the Top Five titles (“Operation Red Sea”, “Detective Chinatown 2”, “Monster Hunt 2”, “The Ex-File 3: The Return of The Exes”, “Us and Them”), which between them earned CNY¥12.3 billion (USD $1.85 billion) accounting for nearly 65% of domestic films’ box office. The Top 10 box office totalled CNY¥15.757 billion (USD $2.83 billion) or 83% of total box office for Chinese films. It shows that while hundreds of Chinese films were released, there was a greater reliance on just a few titles to lift the market, then the equivalent for the US and Hollywood films. However, overall quality is seen to be rising, with the Top 10 films this first half year having an average Douban rating of 6.33 compared to 5.68 in 2016, for China’s Rotten Tomatoes equivalent (see chart below).

Other interesting facts, as highlighted by Entgroup, is that out of the Top 40 titles, five were animations, and of the Top 5 films imported on a flat-fee basis, four were Bollywood titles. While Aamir Khan’s “Secret Superstar” did not match the hight of his previous “Dangal” (CNY¥1.3 billion – USD $196 million), it still took CNY¥747 million (USD $112 million) on a shared revenue basis. Other foreign non-Hollywood films to have made their mark on the Chinese box office this year was Thailand’s “Bad Genius” and Spain’s “The Invisible Guest”. Of the Hollywood films released, “Avengers: Infinity War” did best, though primarily in big cities. Shanghai overtook Beijing as China’s leading BO territory in 2016 and still maintains that lead by 0.3%, up from 0.02% two years ago.

Tied to be the box office growth has been the continued growth in the number of cinemas and screens. By the end of June there were 10,155 cinemas with 55,623 screens across Mainland China. Out of these around 49,000 were 3D enabled screen, accounting for 88%. There was a total of 820 premium large format (PLF) screens, including 304 Chinese Giant Screens and 516 IMAX screens. Wanda was the leading cinema chain with a box office of CNY ¥4.2 billion (USD $633.3 million), followed by Dadi’s CNY ¥3.14 billion (USD $473.5 million) and the next four cinema chains all averaging around CNY ¥2 billion (USD $300 million). Of the top performing individual cinemas, six out of ten are found in Beijing, with Jackie Chan Beijing Yaolai the leader with CNY ¥39.13 million (USD 5.9 million) box office, while three of the four next cinemas in the top five are Imax cinemas.

In June alone 82 new cinemas opened representing an additional 560 screens, meaning that on average 18.67 new screens opened on a daily basis. If this rate of growth continues it means that China will pass 60,000 screens by the end of this year, confirming its position as the world’s leading cinema territory by screen count. Screen growth is spreading outside the major cities, with 4,976 county-level cinemas, which thus account for 49% of China’s cinemas. However, the screen density is lower, with these cinemas representing just 20,742 screens or 37% of China’s total. Of the new cinemas that opened this past month, the per-cinema average was just 6.82, indicating smaller multiplexes opening in Tier 4 and 5 cities.

The growth of movie attendance and box office is largely driven by the new cinemas, but it is spread across every theater without breakthrough growth. The cinemas are under pressure from competition and profit, and some cinemas even operate at a loss. This is a problem that needs to be faced.

It is well known that average attendance is even lower than 14% in multiplexes with fewer screens in smaller cities, which is where most of the remaining growth is coming from. While global consulting firm PricewaterhouseCoopers (PWC) predicts that the Chinese movie market sales will grow at a CAGR of 9.7% over the next five years, through 2018-2022, in its Global Entertainment and Media Forecast Report, it is difficult to square this with the evolving growth patterns of the business.

It is not clear from the statistics whether it incorporates the contributions of private cinemas (aka on-demand cinemas) and if whether these have a measurable impact, with China’s Netflix equivalent iQiyi opening its first on-demand cinema this year. China’s box office now also counts the booking fees as part of the overall BO.  The strong performance will inevitably fuel renewed speculation about how soon China will overtake North America on an annual box office level. While China has had a good first six months, so has the United States and the rest of the world, meaning that unlike last year China can’t just grow to overtake a static or declining market. But growing significantly it is.

In the first half of 2018, the top ten domestic Chinese box office hits were: