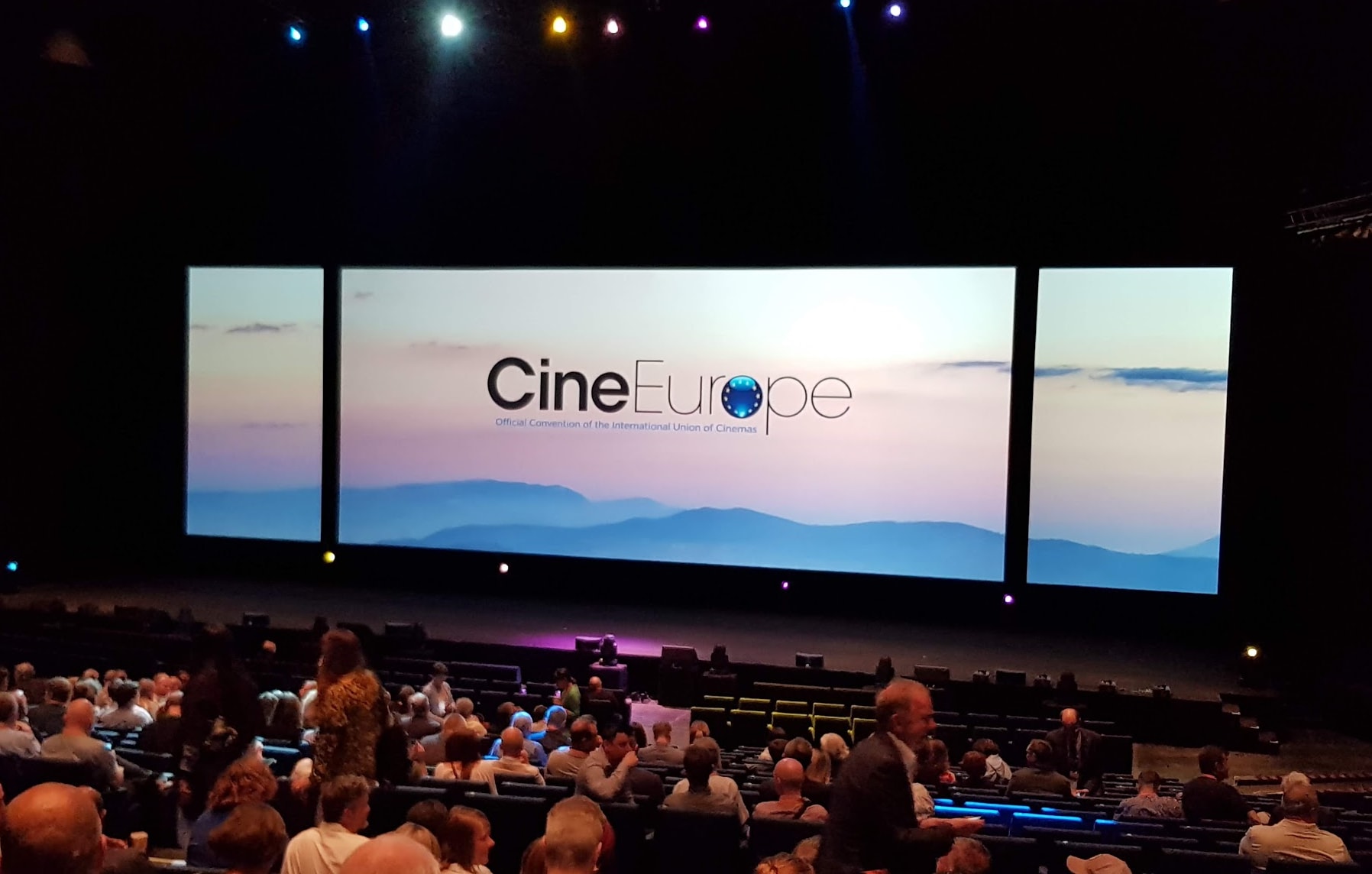 This is the keynote address delivered by Phil Clapp, the President of the International Union of Cinemas (UNIC), at the opening of the CineEurope 2018 convention on Monday 11 June in Barcelona’s CCIB. Included are excerpts from the audio-visual presentation accompanying the speech. For those that were unable to attend or wish to read it again, we are grateful to UNIC for allowing us to reproduce the speech here.

On behalf of the International Union of Cinemas, I am delighted to welcome you to CineEurope 2018.

This week promises another diverse and engaging range of seminars, panels, slate presentations and screenings, and of course a varied and informative trade show.

Already this morning we have heard from leading industry executives on the challenges and opportunities they see facing our sector, and explored with our friends at the European Commission what more might be done to ensure that European film content is able to fight its box office corner.

During the rest of the week, panels and seminars organised by the I.C.T.A. will look at a number of facets of the ever-changing world of cinema technology.

Our CineEurope focus sessions will explore two vital areas of additional revenue for cinema operators – screen advertising and event cinema – as well as discussing what more we might do to serve the female audience.

We are hugely grateful for all who make these sessions possible, through their participation and financial support. And that is true of none so much as our headline sponsor, the Coca-Cola company. Over a number of years, Coke’s retail seminar has been one of the must-see features of CineEurope. 2018 will be no different, with tomorrow morning’s session focusing on perhaps our most precious asset – our workforce.

Finally of course we are delighted that CineEurope is once again able to bring you the widest and best possible range of film content. Starting very shortly with colleagues at Studiocanal and then Sony Pictures, this week will see no fewer than eleven slate presentations and three great movies from us and European partners. The slide behind me [presented above] shows when each slate presentation will take place. Please do take note.

Thank you as always to all of our colleagues in film distribution for their great support for the show.

Each year, CineEurope provides us with an opportunity to look forward to what lies ahead for our industry.

As has been the case in recent years, we are able to do so with renewed confidence as result of the year gone by. Buoyed by increased admissions across the vast majority of UNIC territories. Particular mention to colleagues in Turkey, Ukraine, Russia, Slovakia and Bosnia and Herzegovina, all of whom enjoyed double digit percentage increases in cinema admissions in 2017.

In Europe as elsewhere, that success reflects a range of factors. Certainly it confirms that the cinema-going public recognise the massive levels of investment that European operators are making in all aspects of the Big Screen experience.

Bigger screens and better sound systems. Investment in more luxurious seating, including recliners. And the development of ever-better food and drinks offerings.

It is also a reflection of the extent to which many of our partners in film distribution now adopt a 52 weeks of the year release strategy, for which we say thank you.

But it also reflects the increasing diversity of film content available to European cinemas. Something which our digitally-enabled sector is now better able than ever to harness in reaching the widest possible audience.

Much has rightly been made over the last couple of years about the increasing diversity of film content being produced by our partners at the US studios. Films that reflect different narratives around race, gender and disability. All are of course hugely important if we are to reach out to people from all backgrounds. Of course for European cinema operators, diversity on screen has another dimension.

For most, if not all European territories, the difference between a good and a very good year at the box office will depend as much as anything on the performance of domestically-produced film content.

On the slide behind me [presented above] is a selection of titles, each of which was in the top five films of the year in its home country. In a year in which “Star Wars: The Last Jedi,” “Beauty and the Beast,” “The Fate of the Furious,” and “Despicable Me 3” dominated global box office, each of these films struck a chord with local audiences.

While none to be honest travelled well outside of their home markets, across borders, their domestic success is the clearest possible indicator of the unique diversity of our European cinema market. With that in mind, our thanks go to colleagues from the European Commission’s Creative Europe MEDIA Programme for supporting a selection of European film trailers as part of the UniFrance presentation on Thursday morning. A number of those films will I am sure feature strongly in their home markets in 2018.

UNIC supports colleagues in European production and distribution in their efforts to ensure that as many audience-friendly domestic films as possible find their way to their natural home on the big screen.

At last year’s CineEurope, I reflected on the gender inequalities in our industry. In response, I noted the establishment by UNIC of a new women’s leadership programme, providing mentoring support to six young female executives looking to make their way in our industry.

I am delighted to report that such has been the success of the programme that later this week we will be confirming the next – larger – cohort of mentors and mentees, many of whom are with us here today. Good luck to all of them over the coming year.

And just to note that in 2017, we at UNIC made our own statement on gender diversity by appointing the hugely-talented Laura Houlgatte as our new CEO.

In addition, I wanted to note one other hugely significant development over the last year.

CineEurope 2017 saw the launch of the global cinema federation, established by this trade association in partnership with colleagues at our us sister organization NATO, and eleven of the largest cinema companies in the world. The aim of the federation though is to represent the interests of cinema operators of all shapes and sizes.

In doing so it has sets itself an initial agenda which looks to address shared challenges around issues including technology, film theft, music rights, accessibility, theatrical exclusivity and international trade and investment.

The next few days will see the publication of agreed policy positions on these issues, providing not just a clear sign of the progress made by the federation in the last year, but also we hope a rallying point for operators across the world. Please do check the federation website over the coming days.

In closing may I once again wish everyone a great CineEurope. One where we are able to draw on the energy and creativity of those we meet and all we see and hear.

Knowing that whatever the distractions posed by the unsustainable business practices of so-called “disruptors,” our focus will remain on sustaining the diversity, innovation and investment that is the hallmark of our industry and the key to its ongoing success.

Thank you for your time this afternoon.

Phil Clapp
CEO at UKCA
Phil Clapp is CEO of the UK Cinema Association and President of the International Union of Cinemas (UNIC).The UKCA represents the interests of around 90% of UK cinema operators.UNIC is the international association representing cinema exhibitors and their national associations in the EU, Russia, Turkey and Israel. It currently represents 33 territories accounting for some 33,000 screens and 1 billion annual admissions.
Latest posts by Phil Clapp (see all)
Send this to a friend