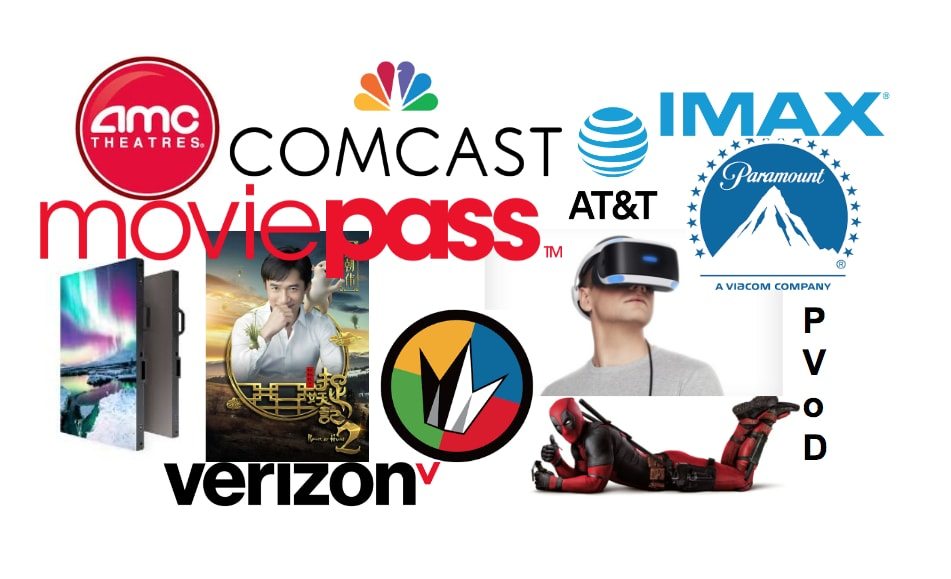 2017 was an eventful year for the film and cinema business and 2018 promises to be even more so. So the Celluloid Junkie editorial team has gazed into the crystal ball to see what’s ahead. Here is a list of possible scenarios in the new year, as foreseen by our top contributors Jim Amos (JA), J. Sperling Reich (JSR) and Patrick von Sychowski (PvS).

With over one million subscribers, MoviePass is burning through money faster than it can hope to recover it by selling data analytics to studios. The parent company Helios & Matheson Analytics can tap the financial markets for more funds, but an investor with deep pockets is preferable. Step forward Alibaba Film’s Yueke, which has already invested in Showtime Analytics. Alibaba has emerged victorious from China’s similar third-party ticket subsidising platform wars, so it knows a thing or two about running costly cinema ticketing subsidies. By tapping into Showtime Analytics’s Hollywood connections it can realise MoviePass’ data potential. (PvS)

The deal for AT&T to purchase Time Warner for USD $85.4 stalled in November when the Justice Department sued to block the acquisition.  The deal was first announced in October of 2016 and at the time Donald Trump campaigned on the promise to block the merger, claiming it was bad for the country.  This may be why AT&T tried to prove their loyalty to now President Donald Trump by handing out USD $1,000 bonuses to 200,000 employees the very same day he passed a comprehensive tax overhaul giving big breaks to big businesses.  However, now that the Justice Department has filed suit it must prosecute the case and prove that AT&T would become a monopolistic media monster by not only being one of the largest telecommunications and pay TV providers in the U.S., but also one of its largest content creators.  All of this comes in the wake of the Federal Communications Commission’s recent decision to do away with net neutrality regulation.  Thus, while Trump may become less boisterous in his opposition to the deal, it still won’t be approved in the projected time frame in its current form and without major concessions from AT&T. (JSR)

2018 is the year of reviewing Hollywood’s access to China. Don’t expect a straight-forward lifting of the quota, with studios instead pushing for relaxation of everything from black-out periods to revenue sharing terms. No artificial boost to the BO this year by counting booking fees and private cinemas. “Monster Hunt 2” may or may not match “Wolf Warrior 2”, but there won’t be a “Dangal 2” for sure. With screen growth accelerating in lower tier cities the BO may grow but per-screen takings will continue falling. Keep an eye on Dadi in 2018. (PvS)

Especially with the coming of Spielberg’s “Ready Player One”, cinemas will have to provide some form of additional experience in their theatres, whether it be VR, AI, AR, etc. I’m not talking about more 4D screens but rather virtual and augmented reality experiences that are designed to grab the 12-30 year-old demo by the throat and compel them to come to the cinema. To tag onto the above, look for cinemas to sell more of the Super Tickets they have experimented with, where you receive not only a ticket, but also some piece of merchandise that people can share on social media and perhaps entry into the VR experience associated with the movie. (JA)

Cineworld’s bid for Regal is contingent on a ‘go shop’ period until 22 January during which time a rival bid can be placed. While Cineworld is offering a premium price, there won’t be many other opportunities for a major global cinema chain to grow to close to 10,000 screens to match Wanda-AMC in one acquisition. So the question isn’t can another company afford Regal but rather, can it afford to pass up the opportunity. CJ CGV and Vue are possible contenders, but Cinepolis is the strongest candidate by virtue of already having looked at acquiring Regla once. (PvS)

After Disney’s acquisition of Fox, “studios will either grow or become a target for acquisition,” Sony Picture’s CEO  Tony Vinciquerra wrote in an internal email. With Comcast having lost out to Disney they will look at alternative targets. Hobbled by several years of underperforming titles and family infighting, Paramount is the obvious target. Having been partnered with Universal internationally through UIP it makes even more sense. However, Comcast could face a rival bid for Paramount from Verizon [see below], unless Shari Redstone pulls off the feat of merging CBS and Viacom first. Warner Bros could survive on its own, whether or not the AT&T merger goes through, but this would still leave Sony Pictures Entertainment (SPE) as the smallest and weakest studio of the original Big Six. “Target for acquisition” too? Don’t write off Chinese interest in owning a piece of Hollywood just yet. (PvS)

Dynamic Pricing Launches in US

Variable pricing in the States will become more of an issue but the key point for implementation is how to police this. It’s fairly easy to regulate in a reserved seating auditorium on a Friday or Saturday night when the house is nearly sold, however a theatre simply doesn’t have the staff to police this when it isn’t a full house. Anyone with half a brain will just buy a $8 ticket for the first three rows then sit in the $13 seats. Are theatres going to make every screen reserved? What’s the cost associated with that? And there are still many US moviegoers who detest reserved seating. What will undoubtedly happen is for theatres to charge more for Thursday night showings of big blockbusters. You can regulate that easier than separate pricing for separate seating. (JA)

The biggest buzz at last year’s CinemaCon was ironically generated by two LED screens; one manufactured by Samsung, the other by Sony.  These aren’t just your ordinary LED screens like the kind you find at the local electronics store.  No, these are impressive “direct displays” that offer high resolution, high dynamic range and a wide color gamut.  The images they produce are stunning and from the average seating distance audiences may not notice the absence of an “old fashioned” digital cinema projector.  There’s only one tiny little problem with these screens; they cost a mint. The technology that goes into them is so high-end and the manufacturing volume so low, each screen costs far more than what it would cost to outfit an auditorium with the latest d-cinema kit… and speakers… and a high gain screen.  Presently there are only three Samsung Cinema LED screens installed or scheduled to be installed globally.  The install base of Sony’s CLEDIS screen in cinemas is unknown.  However, as theatre operators look to differentiate their multiplexes in crowded markets, some of the early adopters will crunch the numbers and begin piloting LED screens.  The contracted install base could increase by a multiple of 10 in 2018 to as many as 30 screens worldwide. (JSR)

While this one is a stretch, the most attractive potential cinema-related purchase today isn’t an exhibitor or Hollywood studio but the original PLF operator. Its share price is still down, even as it grows and expands into new areas ranging from VR to, erhm, spinning classes. While it wouldn’t make sense for say Disney or Vue to try to buy it, there are many other potential owners, ranging from China Film Group to sovereign wealth funds. Remember, you read it here first! (PvS)

It’s always interesting to watch when a hot button issue like PVOD rampages through the first half of 2017 then flickers down to nothing by the end of the year. That usually indicates something is coming. Plus, there have been a few release schedule moves over the past month or so that could be a signal that some form of PVOD will be launched by 3-4 studios through a third party during January or February. (JA)

The Return of Sequels

While the number of sequels, remakes and new franchise entries remain virtually the same in the coming year as in 2017, I don’t believe those in 2018 will suffer from quite as drastic a malaise as this past summer’s offerings did. This year’s crop looks to be a bit more intriguing (hello, “Black Panther”, “Avengers: Infinity War” and “Deadpool 2”) rather than the retreads from the “Pirates of the Caribbean” and “Transformers” franchises we were saddled with in 2017. (JA)

Last November when Disney demanded 65% of box office receipts for “Star Wars: The Last Jedi” from North American theatre operators (plus a four week minimum-run), mainstream media reported on it as if somehow the terms were an anomaly reserved for mega-blockbuster franchises that date back 40 years.  Yet all signs are pointing toward such film rental deals becoming the new “normal,” at least for some titles.  With Disney purchasing Fox, there will be one less studio supplying fewer films making it harder for exhibitors to negotiate better terms.  As theatre chains begin to scale up through ongoing mergers and acquisitions, expect to hear rumblings of a brewing battle royal over film rental as distributors try to inch up their percentages, testing exhibitors’ thresholds.  The terms may not  be as onerous as what Disney was asking for “Star Wars,” but by summer don’t be surprised to read about a few more titles hoping to keep a larger share of their theatrical gross. (JSR)

Twilight of the Movie Stars

This may be a make or break year for a few tried-and-true Hollywood movie stars. Tom Cruise, for example, has watched his career here in the States start to ebb over the past 15 years but he always had the “Mission: Impossible” series to fall back on. If the 6th version of this franchise doesn’t work, then what’s left for Tom other than perhaps the same Netflix route that Will Smith took for the critically butchered “Bright”. Will he join formerly bankable stars like Smith and Adam Sandler on the streaming service or be satisfied that he still remains a star internationally where his films (see: “The Mummy”) still resonate with moviegoers, even if it means the domestic theatrical market is now almost an afterthought. (JA)

Verizon Makes a “Me Too” Move for Paramount

Even with AT&T’s acquisition of Time Warner in legal jeopardy, large telcos that haven’t gotten into the content game will want to position themselves to produce and own the entertainment they are now only paid to deliver. If surviving in the current entertainment industry climate requires transforming into large vertically integrated conglomerates, (a la Comcast), existing players will fear being left out. Specifically, acquisition-happy Verizon will want to throw its hat into the ring by scooping up a big studio or media company. After having failed to acquire Fox’s film properties, despite being in the running until late in the game, Verizon will re-enter the fray in 2018 by going after another studio. Paramount Pictures seems the most likely candidate since Warner Bros. is presently tied up with AT&T, they couldn’t afford Disney, Fox is no longer available and Sony Pictures might be too much for Verizon to untangle. As well, it’s no secret that Paramount is looking for some financial backing after having their USD $1 billion slate financing deal with China’s Huahua Media fall through last November.  (JSR)

Rumours have been swirling about AMC exiting the international exhibition business, but it would seem premature to do so prior to the Odeon IPO, particularly with the share price still in the doldrums. We’ve speculated before that selling a significant stake to an institutional investor like Warren Buffett’s Berkshire Hathaway would be a better way to get a cash injection, while maintaining overall control. (PvS)