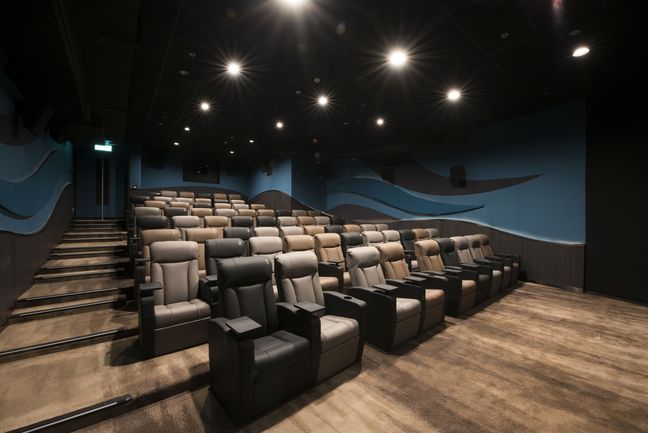 China (Hong Kong SAR) – A luxury cinema has opened in Hong Kong Central’s Lan Kwai Fong. Located on the 3rd and 4th floor of the Entertainment Building, the 16,000 sqft five-screen cinema offers 219 seats. “With a spiral staircase in the middle of the floors and the main black and white color tones, the HK$70 million project adds a Gatsby vibe to a fancy film-watching experience.” There is a wide range of F&B and prices are the same as Palace IFC, the only other cinema in Central. The Standard – 16 October 2017

India: Construction major L&T is planning malls and multiplexes as part of its 269 acres plan for Hyderabad Metro Rail. The malls will be called Hyderabad Next and incorporate 40 multiplexes. They will be located in Hitec City, Moosarambagh, Erra Manzil, Rayadurgam, Uppal, Miyapur, Nagole and other areas, with the first three nearing completion. Mirchi9 – 2 October 2017

India – PVR has converted the famous Chanakya cinema into a four-storey-mall-cum-multiplex. As well as featuring PVR ECX premium large format, the mall hosts shops and brands including Tom Ford, Mont Blanc, Kate Spade, Juicy Couture and Hermes. Work on the project was delayed due to objection about the building height and use of space. It marks PVR’s 600th screen. Financial Express – 23 September 2017

Japan – The Tokyo Midtown Hibiya mall will be home to an 11-screen Toho multiplex on the 4th and 5th floors with 2,300 seats. Integrating it with the two screens in the adjacent Tokyo Takarazuka building will make it the largest cinema facility in central Tokyo boasting about 3,000 seats across all 13 screens. Opening on 29 March 2018 this is the second Tokyo Midtown mall after the Roppongi one that opened in 2007. Fashion Press (JP) – 4 September 2017

Kazakhstan – A luxury shopping mall and multiplex project underway in Astana as part of the Expo 2017 Masterplan. The cinemas will have ten screen, including an IMAX auditorium, as well as nearby restaurants and retail in the Mega Silkway Mall. Chapman Taylor is the lead architect on the project that is set to open fully later in 2017. No word on who the cinema operator is. Chapman Taylor website

UPDATE: This Silkway cinema is operated by Chaplin Cinemas. Instead of an Imax it went with a PLF screen. (Thank you to our readers who updated us on this.)

Pakistan – Cinepax opened its latest multiplex in Mall of Sialkot on 20th October. This is its tenth multiplex and will seat 500 across five screens. It is the largest cinema in the city, as well as offering Gold and Silver experience. Pakistan Observer – 20 October 2017

Singapore – The island state’s first all-laser multiplex (courtesy of Barco) has opened at the Paya Lebar Singpost Centre. Featuring eight screens and 756 seats the cinema has a cafe area. All auditoriums are fitted with ProBax seats, except the Duo Deluxe hall which has “opulent twin leatherette seats, specially designed with lumbar cushion.” The Independent – 4 October 2017

U.A.E. (Dubai) – City Centre Sharjah is 75 complete with a 12-screne Vox cinema as its centrepiece. It iwll be the largest cinema in the UAE when it opens and feature Dolby Atmos, a MAX PLF screen and GOLD by Rhodes – “the new luxury in-cinema, gourmet dining concept.” There will also be 30 stores and several F&B options. Khaleej Times – 15 October 2017

Lebanon – The Golden Age of cinemas in souther Lebanon was the 19690s and 1970s when it had dozens. Today it has just four, falling victim to television and conflict. Actor and director Kassem Istanbul is on a mission to re-open some of these cinemas. He secured a 10-year else to re-open the Rivoli and is now looking to re-open the 400-seat Cinema Stars. The National – 5 September 2017

Korea (Republic of, South) – CineQ is gearing up for the launch of its new cinema on 14 November. Located at the 11th ~ 14th floors of Seoul Sindorim Techno Mart. The former CGV cinema consists of 10 screens with 1,500 seats. Owned by a film distributor, CineQ opened its first cinema in Gyeongju in August. Gamefocus (KR) – 13 October 2017

Japan – Toho Cinemas Daily Theatre in Tokyo will close in February 2018. The three screen and 2,136-seat cinema goes back to 1931 when it opened as Nihon Theatres. It closed in 1981 and was re-opened in 1984. It was famous for showing movie marathons, such as all the Star Wars or Godzilla films in one go. The opening of the Toho Hibiya (see above) is part of the reason for the closure. Cinema Today (JP) – 31 August 2017