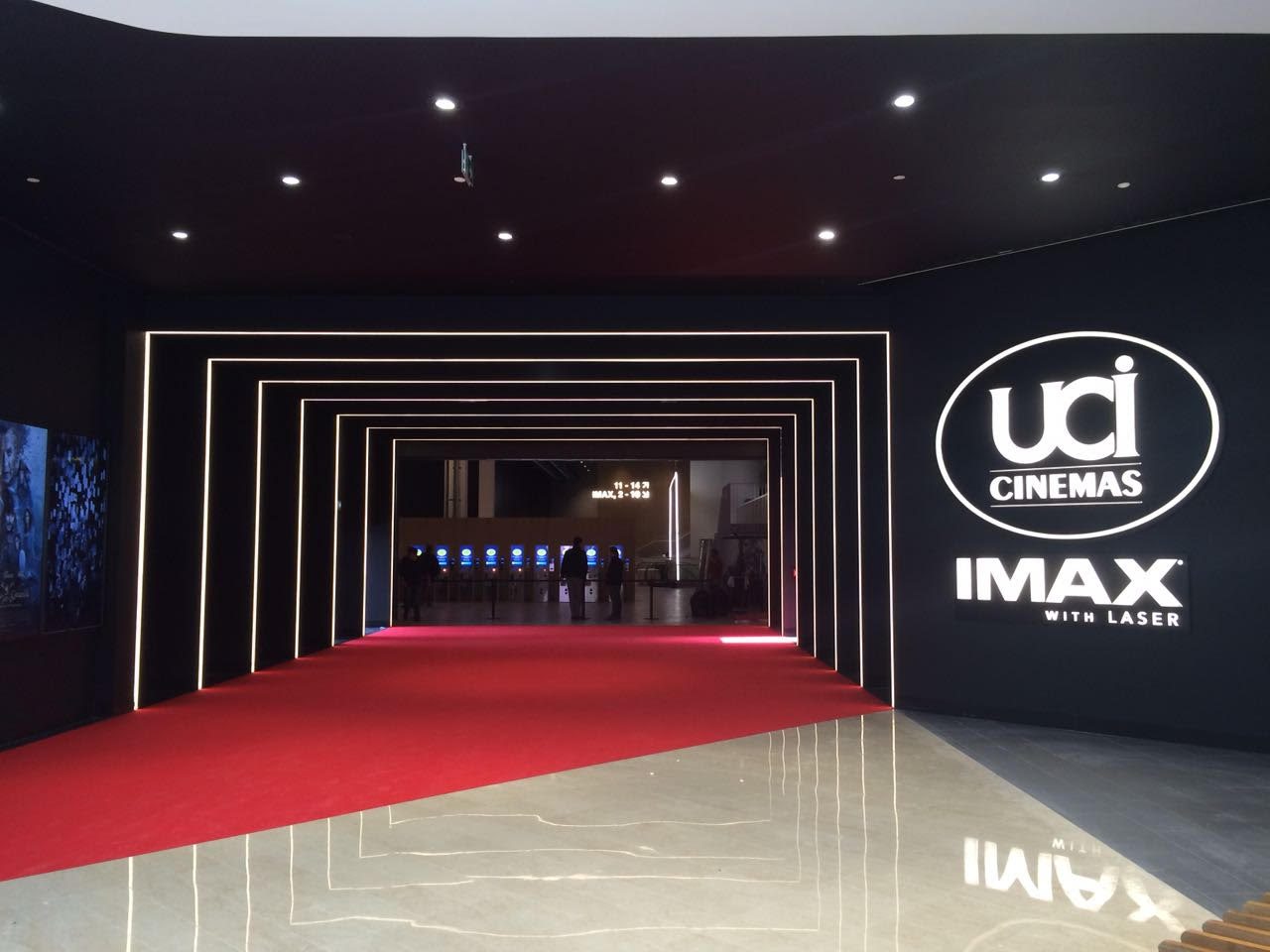 Italy – UCI is set to open its 49th structure in Europe in Italy’s  Azzano San Paolo (Bergamo), which will have Europe’s largest Imax screen. “The multiplex has 14 screens for 2,500 seats, including an IMAX Laser theatre with the largest screen in Europe (30 meters and 15 inches, for a total of 450 square meters).” There are 472 maxi VIP seats and 34 seats for disabled patrons. UCI opened its first Italian multiplex in nearby Curno in 1999, which is expecting a 30% admission drop once the new one opens (25 May), but is set for a revamp to make it more attractive. Italy 24 – 23 May 2017

Australia (NSW) – Work has begun on the shopping and cinema complex Mercato on Byron on Johnson Street. The Woolworths supermarket and nine-screen Palace Cinema complex is expected to open in 18 months. Northern Star – 25 May 2017

Australia – Kempsey is set to get a four-screen cinema after an agreement with Majestic Cinemas. A public private partnership between Kempsey Shire Council, Gowing Bros and Majestic should see the cinema open in December 2018. The Macleaye Argus – 30 May 2017

USA (AL) – Cineplanet 15 is about to open in Madison, though not in time for Memorial Day. The long construction period was delayed by lawsuits. WHNT – 24 May 2017

UK – Details have been revealed about the 11-screen Empire in Southend-on-Sea set to open in late 2019 or early 2020. The 1,370-seat multiplex will feature Empires premium large format (PLF) Impact Screen. THe GBP £50 million redevelopment of Seaway car park off Lucy Road will also feature a Travelodge hotel. Echo News – 23 May 2017

UK – The GBP £15 million cinema scheme in Macclesfield is going ahead after Cheshire East Council agreed to sell the Churchill Way car park in the town’s centre to developers Ask Real Estate. As well as a six-screen cinema the venue will have six restaurants, a cafe pod, retail unit and public realm. Delays mean the cinema (no operator confirmed) will not open until the end pf 2018. Macclesfield Express – 24 May 2017

UK – Discussions are underway with operator and a site is being explored for a cinema in Newmarket. Proposed locations include the TK Maxx building and Heaven Awaits on the city’s high street, or the car park at the Guineas Shopping Centre. The plans will be discussed at the council’s next meeting on 20 June. Cambridge News – 23 May 2017

UK – The GBP £55 million regeneration scheme for Wolverhampton City is set to include a 12-screen cinema. The work is due to start in 2018 and no operator has as yet been linked to the  6.4-acre Westside redevelopment that also includes shops, restaurants and a car park. The Construction Index – 25 May 2017

UK – A first look at Merlin Cinemas’ proposed changes to the Bodmin Public Rooms. Craig Johns Architecture have submitted a plan on behalf of Merlin for a cinema that will include five screens. “The design approach begins with respecting the integrity of the existing historic building,” the application states, as the contract to Merlin was awarded after a tussle with a local conservation society. Cornwall Live – 26 May 2017

UK – A “major cinema chain” is in talks about opening a cinema in Basildon’s East Square in the town centre. Previous attempts to open a multiplex in the Castigate shopping centre failed. “The council hopes the cinema will become the focal point of a ’leisure square’, creating a night time economy for the town centre.” Yellow Advertiser – 25 May 2017

UK – The three-screen The Depot cinema in Lewes has opened. The GBP £8 million complex has “an 140-seat auditorium, a second screen with 3D capacity and a boutique screen with a separate bar.” There is also a large foyer, cafe, film education room and editing suite. Actors Martin Freeman and Sir Mark Rylance were present for the launch. The Argus – 25 May 2017

India – Cinepolis has opened a four-screen multiplex with seating capacity of 737 in The Grand Mall in Bihar’s Muzzaffarpur. It is Cinepolis’ second multiplex in the state of Bihar. India Blooms – 26 May 2017

Fiji – The new Life Cinema multiplex has opened in Nakasi. “The $4.5 million cinema is designed in the 1940 Chicago style interior.” The four-screen cinema with seating for 600 people took two years to construct and will provide 40 jobs. Fiji Times – 26 My 2017

UK – Plans have been submitted to expand Great Yarmouth’s landmark Hollywood Cinema by adding a two-storey glass extension. “The scheme seeks to add a new entrance on the eastern side with a restaurant, first floor bar area and outside terrace looking down the Golden Mile.” The plan looks set to be accepted by the local council. Eastern Daily Press – 24 May 2017

UK – Work has started on the refurb of the Vue cinema in Capitol Centre in Walton-le-Dale. “The plan was for a “contemporary and striking” frontage, which includes an extension to form a new entrance, projecting 3.8m from the main front elevation for a width of 16.8m and a height of 12m.” Details was not provided about work on the interior. Built in 1991, the complex has not been modernised since then and was scheduled for demolition two years ago. Lancashire Post – 26 May 2017

UK – Coventry’s Showcase Cinema in Walsgrave is set for a refurb and re-branding as a Showcase Cinema de Lux. The cinema has opened a XPlus screen (16m x 7m) with Dolby Atmos and is replacing every seat with a leather recliner, “offered at no extra cost to the customer.” The lobby will be refurbished and feature a Lounge Bar and Costa Coffee, as well as Coke Freestyle machines. Work will be completed in June. Coventry Telegraph – 27 May 2017

Germany – No news on when the Cineplex cinema in Dormagen will re-open. The multiplex had two screens destroyed by fire five months ago. Screen 1 has been restored but work continues on Screen 2 and there are unresolved issue about fire insurance and safety between the cinema and the landlord. NGZ Online (DE) – 25 May 2017

USA (MN) – Marcus Theatre in Duluth is getting an upgrade to DreamLoungers. Seven auditoriums have been upgraded already and three more will be completed in June. The UltraScreen auditorium will not be upgraded as it had memory foam loungers installed just four years ago. There will aloso be resoerved seating and a Zaffiro’s Express opening. Duluth News Tribune – 27 May 2017

France – Anger and confusion about the fate of the Gaumont Variétés cinema on Blvd Foch in Angers that closed in 2013. 300 people attended a community meeting to discuss bringing back the cinema. The cinema i the back of the building belongs to Gaumonth but the front belongs to other owners, complicating the situation. Ouest France (FR) – 24 May 2017

UK (Northern Ireland) – The cinema on Dublin Road may be incorporated into the planned GBP £65 million office complex. Michael McAdam, Movie House Cinema’s managing director, says that negotiations are ongoing. “Movie House Dublin Road continues to trade as normal and we have a full line up of fantastic movies scheduled,” in the meantime he said. Belfast Live – 21 May 2017