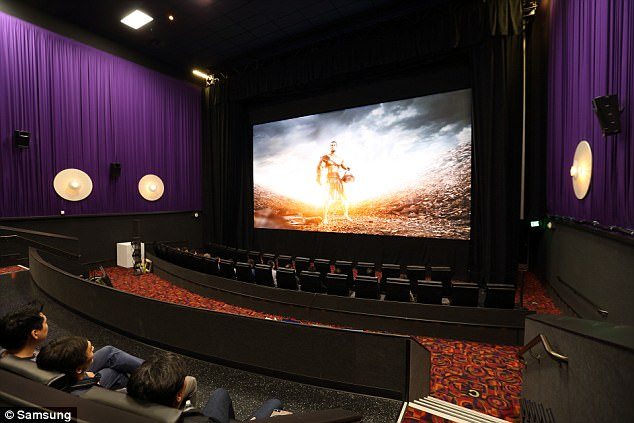 Samsung Electronic’s LED direct view digital cinema display has passed DCI compliance tests and can thus now be used to screen new Hollywood releases in cinemas. Having first been shown at invitation-only demonstrations at CinemaCon in late March this year, the speed with which Samsung’s potentially disruptive technology has been brought to market has taken many inside the cinema technology industry by surprise. Previously only projectors from Barco, Christie and NEC based on Texas Instrument’s DLP Cinema technology and Sony’s LCoS SXRD have been passed as DCI compliant cinema display devices.

The compliance test plan certification was made on 22 March 2017 by Keio University in Japan, which is one of the affiliated partners of Digital Cinema Initiatives, LLC (DCI) for testing and certification of digital cinema equipment. The KEIO-SAMSUNG-RAK0116ZZ-F7PG-20170322 report found that the Samsung RAK0116ZZ-F7PG digital cinema display (model 1.0), using an SX-4000 media block by GDC Technology, passed the Compliance Test Plan version 1.2. The LED module tested was a BN40 with 24 modules per cabinet and 96 cabinets in total.

It is not clear what Samsung’s next steps will be, not least as the company has still made any public announcements, apart from its initial press release, or engaged with industry analyst or journalists. But we have spoken to several people close to the company and other industry insiders to form a picture of what the likely path forward will be. It is widely believed that Samsung will have a commercial product before the end of this year and will promote it aggressively. Samsung’s DCI certification is also likely to spur LED cinema effort by Sony Electronics – who demonstrated their prototype at CinemaCon – and HSI Immersive, as well as other potential players.

Samsung is continuing to hold private demonstration, primarily aimed at cinemas, Hollywood studios and creatives (directors, cinematographers, etc.). Being an outsider to the cinema technology industry, Samsung has been assisted in engaging with cinemas through its partnership with GDC Technology, whose integrated media block (IMB) its displays use. GDC has also announced plans to offer an 8K premium large format (PLF) system using Samsung’s technology. Samsung has a second entry point into cinemas through last year’s acquisition of Harman International for USD $8 billion. While Harman is big in automotive, it is also the maker of JBL speakers, found in cinemas around the world. It is also owner of Lexicon and other companies with technology in manipulating sound in the time domain.

At the moment few Hollywood or cinema industry insiders are prepared to go on the record about their impressions of the Samsung system, or those by Sony or others. Speaking recently to Holland Film Nieuws (HFN) about the upcoming CineEurope convention, UNIC’s President Phil Clapp observed that “probably the most anticipated technological development will be that around LED screens, which if a viable operational model can be found could offer something of a ‘game-changer’ for the sector.” However, Clapp also cautioned that “the investment context for [cinema] operators has changed,” and that “with little or no prospect of another industry-wide funding mechanism to help [cinema operators], then those decisions become necessarily more challenging and their outcomes uncertain.” One Hollywood insider who agreed to be quoted off-the-record quipped about the Samsung LED Cinema Screen that “at least with a high brightness screen, cell phone use in the theater will be a lot less obtrusive.”

Industry insiders that CJ has spoken to believe that Samsung will be aggressive on pricing for its screen, though others have also said that at least initially it will be comparable to that of RGB laser projectors. However, LED Cinema is fundamentally based on the same technology as its consumer LED televisions, though with some critical differences such as Samsung LED Cinema believed to be 16-bit, to offer high dynamic range (HDR), while consumer devices are usually 10-bit, even if they offer consumer-level HDR.

While there is nothing technically preventing new Hollywood releases to be shown on the Samsung Cinema Screen, now that it has passed DCI compliance test, it will want to have new content specifically mastered for its ultra bright “500 nits” (146 footlambert versus 14 footlambert) HDR screens. With studios already under time pressure to deliver DCPs in multiple propriety visual flavours (Imax, Dolby Cinema, EclairColor, Barco Escape, etc.) and summer season in full swing, Samsung will find it challenging to persuade both studio and the creatives who have to sign off on the final look for a full length feature film release, as opposed to clips. For CinemaCon it is believed that much of the footage used came of Blu-ray UHD discs, and there were notable issues with some of the footage.

Speaking to press at CinemaCon during the demo of its LED Cinema screen, Sony actually welcomed Samsung’s push into the cinemas field, because unlike with its reflective LCD-based SXRD cinema projection technology, Sony would not be the sole champion of this new cinema technology. Sony’s Crystal LED (CLEDIS™) is understood to be not as far advanced in terms of DCI compliance or commercial prospects and Sony is believed to be focusing more on its laser projector efforts, while taking a wait-and-see approach to Cinemas LED, even as its holds demonstrations and sounds out industry professionals on their views. Meanwhile HSI has said that its “3D LED is currently undergoing the DCI certification process.”

One of the main issues that Samsung will also have to tackle next is the audio problem of not being able to position speakers directly behind the screen. There was nothing in the DCI Compliance Test Plan (CTP) about how audio should be directed at audiences, primarily because the Hollywood studios behind the DCP spec did not want to get into telling cinemas how to build their auditoriums. Yet positioning stereo speakers on either side of an LED screen will no achieve the desired effect. Unlike LED television sets, there is also no Dolby Atmos soundbar-equivalent that can be out under the screen. Sony’s new “Acoustic Surface™” system, shown on the coming XBR-A1E Bravia OLED  could be implemented into their CLEDIS system, but it is unlikely that Sony will sell or licence this to Samsung.

In our next article, however, we will examine how the solution to this audio problem could come from a wholly unexpected source.