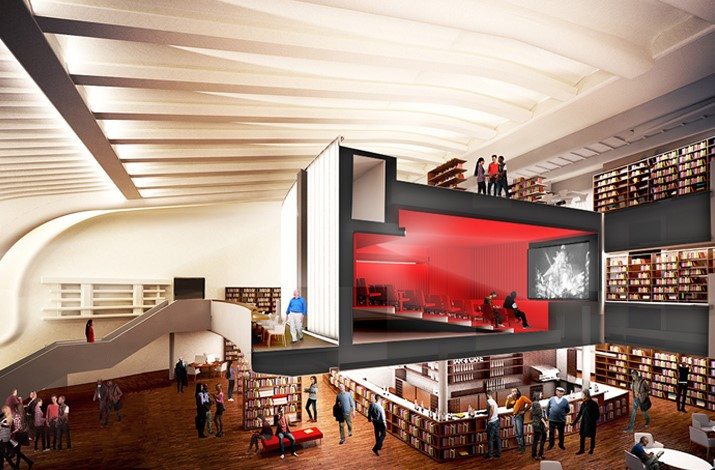 UK – Fascinating in-depth look at how an old Odeon cinema in Chester was transformed into a community hub with cinema, library and restaurant. Several forward-thinking features in Chester Storyhouse such as no box office (tickets booked online), no security for the library (patrons are expected to be honest), gender neutral toilets and inspiring design by architects Bennetts Associates and theatre consultants Charcoalblue. There will be both autism and dementia-friendly screenings. The Guardian – 7 May 2017

UK – The Light has been revealed as the operator of the planned cinema in the Bon Accord mall in Aberdeen. The seven-screen 800 seat multiplex will be constructed in the mall’s empty bowling alley by beveloper BMO Real Estate Partners. The Light is opening a cinema in Scotland’s Dundee later this year. Another six-screen cinema is planned for the outskirts of Aberdeen. Evening Express – 5 May 2017

France – Details have been revelaed about the 12-screen Megarama multiplex opening in Toulousse in 2019. This will be the operator’s first multiplex in Occitanie and have 2,000 seats, with one 450 sqm auditorium featuring a 20 meter screen, three auditoriums seating 200 and eight smaller auditoriums. It plans to screen 400 films per year with an audience target of 478,000. France Bleu (FR) – 10 May 2017

France – Plans for the future cinema at Place Bessières in Cahors have been unveiled. The seven-screen cinema will have 900 seats, with work starting in 2018 for an opening by the end of 2019. As part of the work Place Bessières will be opened up and made pedestrian to make it a public space. Spread over two floors it will include a fireplace (!) relaxation area and a restaurant and/or cafe. La Vie Quercinoise (FR) – 4 May 2017

U.A.E. (Dubai) – Vox Cinemas will open a 12-screen multiplex in the City Centre Sharjah shopping mall’s extension. Four quick serve restaurants will open next to the cinema: Chilis, Gazebo, Nando’s and McDonalds. The redevelopment of the mall is expected to be completed by the end of 2017. Arabian Business – 3 May 2017

Benin – New cinema plans for the central African state’s city of Cotunu. The People’s House of Wologuèdè, which had lately been used as an evangelical church, was raised to make way for the planned future house of culture. The plan is a result of the partnership between Cotonou City Hall and the Bolloré Group that is rolling out cineas across Africa. BeninWebTV (FR) – 8 May 2017

UK – As part of its GBP £2 million revamp of its Cambridge cinema The Light will include an Imax screen. The screen will open 21 July in time for “Dunkirk”. The Light had previously added a Green Room bar and café to its premise, which it bought from Vue for GBP £9.6 million in 2015. Cambridge News – 9 May 2017

UK – Bishop’s Stortford is set to get a new 4K projector setup with thescreen stortford in the Rhodes Arts Complex. The “six-figure” investment gave the site a new projector and audio system, with further work on flooring and seating set for August. Hertfordshire Mercury – 7 May 2017

USA (MA) – Weymouth’s Cameo Theatre was was acquired from PAtriot Cinema in 2011 and has now been refurbished by owners Michelle and Bret Harvey. They took care to retian the historical character of the cinema, including its distinct wallpaper. Recliner seats reduced seating capacity by 100 in each of the two screens, but “comfy seats give it more of an experience,” Michelle Hardy is quoted as saying. Enterprise News – 4 May 2017

UK – Reel Cinema’s Astoria in Chippenham set for expansion with plans to add three screens to its existing two and doubling seat-count. The cinema will convert a disused space on the ground floor, previously a bingo hall but now a derelict shop. Family-owned Reel has 15 cinemas across the UK and plans to open six more. Gazette & Herald – 5 May 2017

UK – Next weeks sees the grand opening of The Light’s flagship cinema in Sheffield. For those not able to make it to the opening (including your’s truly – sadly) you can already now experience it with an impressive 360-degree walk around virtual tour. The cinema promises ‘affordable luxury’, seen in the recliners (textile, not leather), open spaces with wooden furniture and a well-thought through retail area. Hope to visit it in person soon.