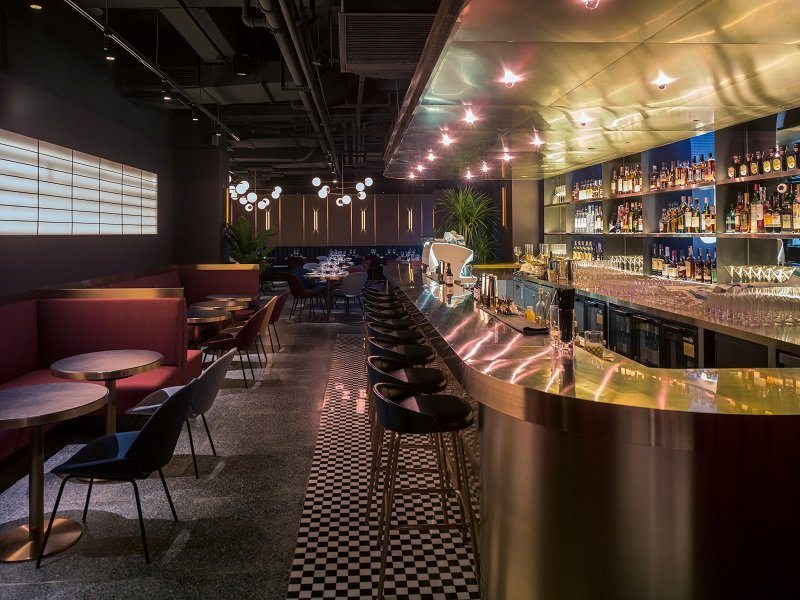 Discover the magic of the Avalon Theatre on Catalina, which is the CJ + Vista Cinema of the Month

China P.R. – It’s a Bar! It’s a Cinema! It’s a Restaurant! It’s Cinker Pictures new foray into luxury screening room cinema going in Beijing’s North Taikoo Li venue. The 30 cushy leather sofas (because a recliner just wouldn’t be classy enough) look great, but it is the bar that it truly inspiring. Tickets are CNY ¥100 (USD $14.44) via the WeChat channel, showing classics like “The Grand Budapest Hotel” and “The Lobster”. No doubt you can probably also order lobster of the menu. The Beijinger – 11 January 2017

China P.R. – Changsha first Evergrande Studios multiplex has opened with a “hot samba performance”. It is the first premium large format (PLF) screen in Changsa and the 83rd in China for China Film Giant Screen (CFGS). Evergrand has plans for 200 more screens opening in the next three years, taking its total to 2,500 screens. Red Net (CN) – 7 January 2017

Indonesia – Cinemaxx has opened its first cinema specifically catering to children 3 to 10 years old. Cinemaxx Junior is located in Tangerang, 25 kilometres West of Jakarta. There is both a large indoor play area and a screen with slides. The cinema has a seating capacity of 106 with very varied seats, including loungers, beds and bean bag seats. Win Business News (CH) – 12 January 2017

USA (TX) – Alamo Drafthouse will open its latest cinema at the LaCenterra at Cinco Ranch near Houston in the spring of 2018. The cinema has eight auditoriums and plush wide recliner seats with no traditional front row close to the screen. The cinema of course also has a bar and lounge area with patio seating. It is the first Alamo in the Houston area since the closure of the Vintage Park in December, which has now become a Star Cinema Grill. Four more Alamos are planned for Houston. Culture Map Houston – 12 January 2017

Switzerland – Basel’s shopping mall Stücki will be converted into an 18-screen multiplex. Two-thirds of the mall (14,000 sqm) will become a Megaplex cinema with a seating capacity 2,400. Micros and Mediamarkt are two of the retailers who will be re-located. Business in Stücki has declined since the Swizz Franc went up in value and consumers prefer to cross the border to shop in euros. Part of the mall has already been converted into a fitness centre. Yet a few hundred meters across the border there is already a (cheaper) multiplex. Basler Zeitung (DE) – 13 January 2017

Germany – Capitol cinema’s Stefan Stefanov is proposing to convert an Esso gas station in the Munich suburb of Unterschleissheim into a cinema. The location on Bezirkstrasse would house a cinema with four to six screens and a total of 500 seats. It would also have a restaurant and a bar/cafe. One of the screens would also have a scene for live events and a deep garage with space for 100 cars would solve the parking issue. Merkur (DE) – 16 January 2017

Ireland (Republic of) – Work is set to resume on the troubled Solas arthouse cinema building project in Galway on 13 February. The cost of the project has ballooned to €9 million after years of delay since 2009. The three-screen cinema is meant to accommodate 178, 82 and 69 patrons respectively. Element Pictures is the new project leader. Connacht Tribune – 10 January 2017

UK – A first look inside Odeon’s new flagship cinema in Bournemouth opening on 9 February with “Lego Batman”. The PLF iScreen (GBP £2.50 extra) will be 7m x 16.5m with 56-channel speakers. There will be three kinds of seats, including the first time Odeon has installed recliners in a new cinema, with some screens also capable of converting to ‘Kidzones’. Food choice will be extensive, including pizza ‘planks’. Bournemouth Echo – 14 January 2016

UK – Work has begun on Dover’s new multiplex. The GBP £53 million development will also include a hotel, Marks & Spencers and Next shops and several restaurants. Opening is scheduled for autumn 2017. The project suffered  switch of contractor.  KentLive – 12 January 2017

UK – Local film fans are opening a 50-seat community cinema in South Port’s former Latin Lounge. The cinema will focus on arthouse, independent and classic films with tickets just GBP £5 for adults and less for students and seniors. The cinema will also have a cafe and bar room, as fellas meeting area. South Port Visiter – 11 January 2016

Germany – Erlangen’s Manhattan cinema is closing and becoming a VIP cinema by the Weber family who operate the Nürnberg Cinecitta luxury cinema. Seats will be replaced with luxury recliners, tables, Dolby Atmos sound and new projection. The foyer and lounge will be refurbished and the screen enlarged. In the summer there will even be space for an outside Biergarten (beer garden). The cinema will also made more accessible for wheelchair and with the Cinema Connect System app for deaf and blind patrons. The original cinema, named after the Woody Allen film, will cease to exist in its present condition in September. NordBayern (DE) – 10 January 2017

Poland – Helios is completing refurbishment of its multiplex in the 10-year old Galeria Askana mall in Gorzowa Wielkopolska. This will include both a technology upgrade as well as improvements to the interior, which will reflect the history of former local cinemas. A nice retro touch for a modern multiplex. Retailnet (PL) – 10 January 2017

UK – London’s stunning Carlton cinema in Islington has been restored to its former Art deco glory by new owners Resurrection Manifestations. In addition to their church services they want it to be used as a cultural venue, host music concerts and screen films, but a handful of local are objecting. They seemed happier when the Essex Road venue was a bingo hall. Islington Gazette – 11 January 2017

UK – Blackpool’s Regent Cinema is getting more couples’ seats after the first installations proved very popular. Other improvements include heating, two additional staircases and a stage for bingo nights. The Grade II-listed building was re-opened in 2014. Blackpool Gazette – 11 January 2017

USA (AR) – Hot Springs VIP Cinema is the new name of Hot Springs Mall Cinema. The multiplex has undergone a major facilities expansion and concessions counter re-think under new owner Matt Smith. When it re-opens this summer it will have stadium seating and full food menu with beer and wine. HS Voice – 10 January 2017

USA (PA) – Theater One at Pocono Cinema and Cultural Center in East Stroudsburg is getting a “much needed makeover.” Work includes new flooring and seats, as well as a remodelled lobby and cafe area. The non-profit received a USD $150,000 grant from the state for the work needed. A campaign has been launched for public donations to also refurb screens two and three. WNEP – 10 January 2017

Sweden – Storfors has become the first place in Sweden’s Vaermland with a 4K projector. The re-opening of the cinema in Storfors was made possible with funding from Region Vaermland, with the cinema seen as being at the heart of the town’s cultural offering. NWT (SE) – 12 January 2017

Sweden – The theatre in Stockholm suburb Blackeberg will soon start screening films again. The cinema Kaskad opened in the 1950s, but though the old screen remains no films have been shown there. Now local companies and individuals are invited to ‘buy’ chairs in the auditorium to raise money for re-opening the cinema. Bromma Tidning (SE) – 11 January 2017

Japan – The New Hachioji Cinema in Tokyo is closing after 70 years of operation. The four screen cinema has 430 seats and opened in another location in 1947 before moving to its present site in 1964. It was one of six cinemas near Hachioji station, but the 50 year old building it is in has to close de to faulty plumbing and air conditioning. The last film to screen will be “Cinema Paradiso”. Yomiuri Line – 13 January 2017

Spain – It is the end of Ibiza’s famous Cine Serra, with demolition equipment razing it to make room for a five-star hotel. The cinema opened in May 1912 and showed it last film in November 2013. It was the second cinema ever on the island of Ibiza. Periodic de Ibiza (ES) – 13 January 2017