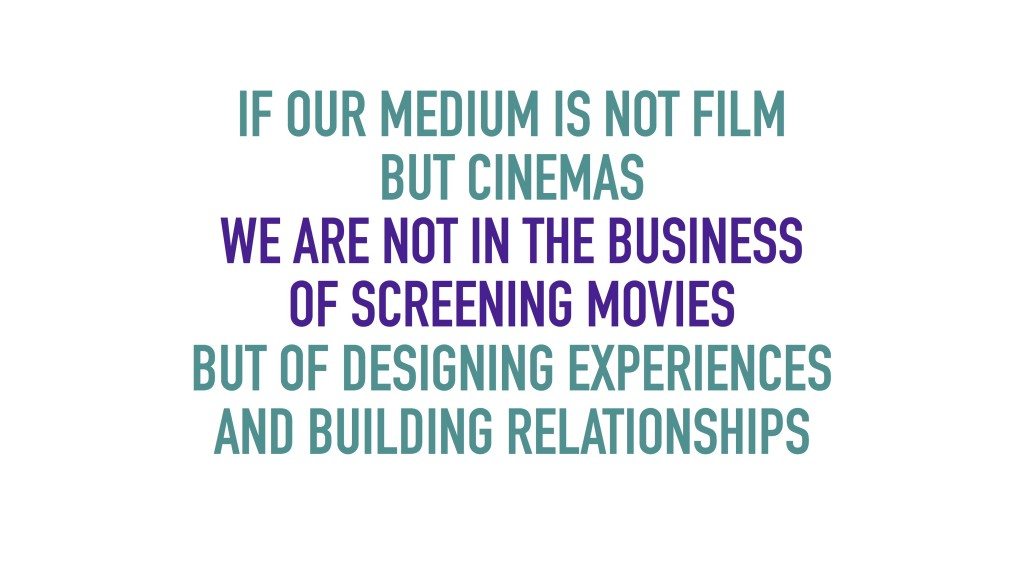 UK – By far the best presentation on cinema I’ve come across all year is the Keynote Address by Johanna Koljonen given at This Way Up 2016 last Tuesday. The points she makes about design, cinema and experience (see slide above) might be “obvious” but they deserve to be hammered home again and again (just like Matthew Wilson’s CineEurope Pret keynote that CJ and Coke bring you this week). Koljonen’s strength is that she understands both neuroscience (“80% of our memory of the experience is formed by the last 20% of the experience”) and the importance of getting basics right (“bathrooms, which should not be disgusting”). Read it. Now. The Bigger Picture – 29 November 2016

UK – The same conference arranged by the British Film Institute saw statistics presented by Tanya Easterman of Cinema First, which showed that 71% of those surveyed thought that cinema was an “expensive activity” and 51% of audiences “believe the cinema experience does not justify the overall expense.” This seems like a clear sign that it is not ticket prices that have to come down but that the overall experience must go up. Screen Daily – 1 December 2016

UK – An excellent overview in The Observer of the evolution of the cinema experience (comfier, more wine) and of film consumption (streaming, choice) in the last ten years:

As Edward Humphrey, digital director at the British Film Institute, explained to me recently, the retail-park multiplexes haven’t really declined. (At the end of 2015 the UK had 4,046 screens in 751 cinemas, a figure that was up, slightly, on the year before.) What has changed in the last decade or so is that the smaller, urban cinemas, in tandem with the public’s idea “of what constitutes a cinema”, have evolved. These cinemas, said Humphrey, had started explicitly selling “an evening out experience”.

Malaysia – Korea’s CJ CGV is reported to be moving forward with its plans to acquire Malaysia’s largest cinema operator Golden Screen Cinemas (GSC). According to an investment bank source, “CJ CGV is in talks with the Southeast Asian nation’s largest film distributor and movie theater operator to purchase the 100-percent stake in the company,” although price is still apparently a hold-up in talks. GSC has 306 screens across 33 cinemas. If the deal goes through it will narrow the gap between global #5 CGV and current #4 Cinepolis. At least until the next round of mergers. Korea Economic Daily –  2 December 2016 India – Gripped by a wave of nationalist fever India’s Supreme Court has mandated that all cinemas must play the National Anthem before the showing of films, during which the Indian flag must be shown and audiences must stand. Currently this is only the practice in the states of Maharashtra and Goa, where a wheel-chair bound man was recently attacked for not standing during the anthem. Already there is a backlash brewing (here, here and here) about the ISC over-extending itself with this ruling not based on any specific law or violation thereof, but some cinemas have already begun implementing the ruling. Variety – 30 November 2016

India – For a good overview of the consolidation and trends in the Indian multiplex sector there is detailed article by Business World. Nothing sensationally new, but quotes from PVR and Kinepolis India lays out their strategy in clear terms and without the frequent hyperbole about planned screen growth. And China still builds more screens in two weeks than India does in a year. Business World – 30 November 2016 Australia – A Gold Coast Event Cinema is in trouble for posting a job advert for a cleaner specifying someone ‘Indian or Asian’. The Gumtree advert was posted on Sunday for a job of of cleaning Maroochydore’s 12 Event cinemas on Queensland’s Sunshine Coast. The ad has since been removed and the subcontractor who placed it has been fired. Daily Mail – 29 November 2016

Korea (Republic of – South) – Cinema admissions have been hit by the protest against South Korea’s President Park Geun-ye. Revenue is down 30% compared to October as weekly rallies against the President draws millions. The protests have evolved into candle-lit festivals with food trucks and K-Pop music. Hollywood Reporter – 29 November 2016

France – Ymagis has acquired the assets of theatrical content delivery business from Italy’s Open Sky SRL. The Open Sky Cinema platform will be folded into Ymagis’ content delivery network. “It’s a strategic move for our company to take over these valuable assets from Open Sky SRL at a time when we are actively pursuing our market consolidation strategy in theatrical delivery,” explains Ymagis Group President and CEO Jean Mizrahi. It looks like the European content delivery business is consolidating into two pan-European majors (Ymagis and UNIC), with a few smaller challengers (Gofilex, MPS, Flix, etc.). Press Release – 29 November 2016 Germany – Smart Pricer has partnered Compeso to integrate Smart Pricer’s dynamic price optimization software with Compeso’s ticketing system (POS). Compeso claims to be one of the leading cinema ticketing operators in Europe, with over 2,500 cinemas in its network, including Odeon & UCI, Vue’s Cinemaxx and Cineplex. Press Release – 30 November 2016

USA (NY) – Perhaps this can be the last word on “Billy Lynn’s Long Halftime Walk”. Legendary technology expert, historian and Met Opera veteran Mark Schubin saw the films twice, once in the 120fps 4K 3D “super” format, and once in the “regular” 24fps format. He considers the experience akin to seeing two different films. I won’t pull out an extract because it is worth reading his review and impressions in full. For those of us not getting to see the film in either format, this is as close as it gets to experiencing it. Schubin Cafe – 28 November 2016

UK – Food and drink should be banned from the cinema thunders the Editor of the Sunday Express, after actor Imelda Staunton complained about people eating in the theatre. He then recounts a particularly traumatising incident of someone next to him at a screening of “Love, Actually” wiping his nacho-and-cheese-stained fingers on the cinema seat. But The Courier defends those who want to enjoy their popcorn. “I’m with Imelda but she should be talking about respect, not food. There’s nothing wrong with eating during a performance, if it’s done with decorum and consideration.” The Courier – 28 November 2016

India– Airports and cinemas cannot charge more for bottled water than shops the Indian consumer affairs department has said in its advisory to state governments. The issue of maximum retail price (MRP) printed on all packaged goods is a perennial one in India. Cinemas get around it by having special bottles in different sizes than in shops sold in multiplexes. Times of India – 1 December 2016 The report, Building Box Office Brands: Volume II, suggests that retail, food FMCG, telecoms, travel & transport and all services brands could optimise their whole ad campaigns and see an increase in the returns delivered at an overall level if they boosted investment.

At the DCM 2017 Upfronts it was revealed that FMCGs only invest 2.8% of their ad spend on average in cinema, which DCM feels should be 6.8% optimally. Mediatel Newline – 28 November 2016

Germany – Cinemaxx is offering its “Upgrade to VIP” in 23 of its cinemas, where for between 1.50 euro and 2 euro you can have a more comfortable seat in the back. The cinema operator has installed 3,200 new spacious leather seats with recliner ability in one or two rows of the selected cinemas. Interesting to see the re-seating being done partly in European cinemas as opposed to the entire auditorium as in North America. Blickpunkt: Film (DE, paywall) – 1 December 2016

Australia – Staff at the Sydney’s George Street Event Cinemas did an amazing job for the Star Wars-themed #MannequinChallenge that involves standing still as if frozen in time. Enjoy the video of the result above. Gizmodo – 28 November 2016