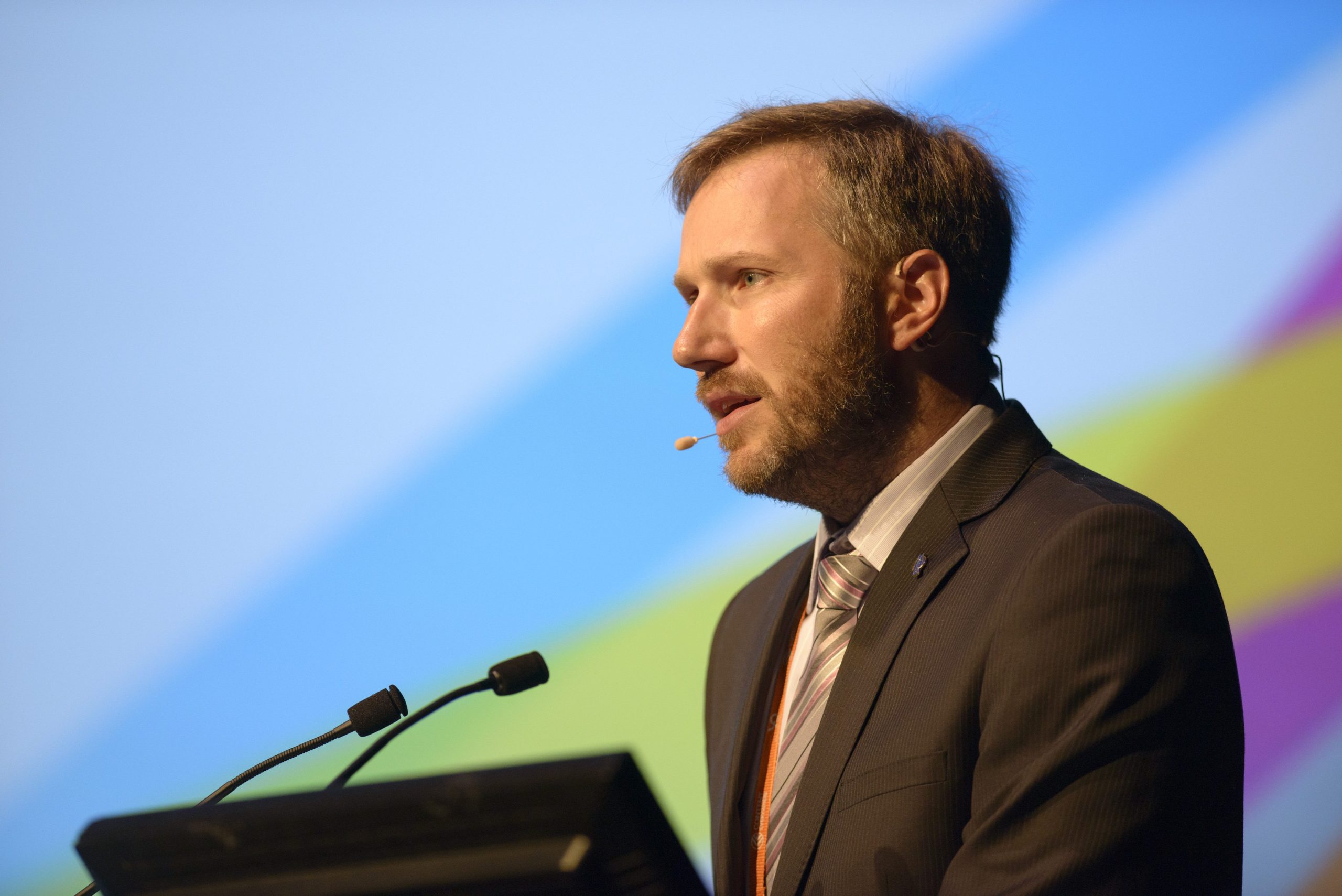 With less than a month to go until IBC 2016, Celluloid Junkie caught up with Julian Pinn, who in addition to his day job of running consulting service Julian Pinn Ltd. and being technical adviser to UNIC, heads up IBC’s Big Screen Experience conference strand.

Celluloid Junkie: If you were to identify one particular theme or trend for this year’s IBC Big Screen conference, what would that be?

Julian Pinn: There has been an explosion of innovation in the cinema industry now that the transition from film to digital is behind us, and not just experiential innovation (HDR, HFR, Immersion) but also in digital marketing, which is starting to exploit the analysis of big data. And we have a fascinating session on the afternoon of Monday, 12th on how the Big Screen is being transformed with Big Data featuring panellists from Showtime Analytics, Movio, and CinemaxX Entertainment.

The core theme, though, of this year’s IBC Big Screen conference is to evaluate and draw conclusions from all this innovation to help the market shape cinema’s future effectively and profitably.

CJ: The IBC Big Screen has long positioned itself as being at the cross roads of art and technology. Do you feel that this has helped to set it aside from other, more cinema-oriented events, and has it found its voice?

It’s also important to relate cinema topics to the wider electronic entertainment industry and IBC—with its access to its own Big Screen at the RAI—is perfectly placed to bring these key elements together in a very meaningful and demonstrable way.

CJ: This is the third year that the IBC Big Screen stream is free to anyone who registers (for free) to IBC. How has it developed since it became open to the wider public?

Julian Pinn: The free registration to IBC ends on 19th August but once registered, access to the Big Screen Conference stream is still at no extra cost. We felt that this was an important move in order to provide a more simplified access to the Big Screen and the very wide variety of topics presented over the four-day-conference that cover the entire supply chain from capture to exhibition.

Some delegates prefer to drop in for just a few sessions or target a particular day whilst there are some that stay the entire time. This gives us the ability to cater for the wider audience whether you’re a camera operator, technologist or cinema exhibitor and to add value to the overall IBC experience.

Since this initiative, the attendance at the Big Screen has grown to represent about 25% of the entire IBC conference from a session-admissions perspective.

CJ: You’ve pulled off the coup of having director Ang Lee come and give a keynote very close to the release of his much-discussed “Billy Lynn’s Long Halftime Walk” – how was this pulled off?

Julian Pinn: This is truly exciting for IBC and for the industry. I reached out to Ang Lee over a year ago with an invitation of having him and his 120 fps “Billy Lynn’s Long Halftime Walk” feature at IBC and he showed immediate interest in being able to showcase his vision in an environment that celebrates how art and technology come together—and also an environment that can actually meet the full specification of this ground-breaking work. This has been long time in the making.

Last year was too soon (as is this year almost!), but we’ve had great support from Sony Pictures Entertainment, from Ang Lee and his wider team, and also of course from Christie, 7th Sense Design, and Dolby. It’s really superb to see history in the making and I’m delighted and honoured to be hosting on stage such a leading name in cinema and to offer a platform for the industry upon which we can hear and see such amazing vision.

As an added bonus, we will be following Ang Lee’s keynote address with a technical deep-dive session where I will invite key members of the crew to join Ang Lee and me on stage to examine—and demonstrate—the details behind the production and delivery of “Billy Lynn’s Long Halftime Walk”, which is a 120 fps 4K 3D production on a technical scale never before seen.

We will be joined by: Tim Squyres (Editor), Ben Gervais (Technology Supervisor), and Scot Barbour (Head of Production Technology at Sony Pictures Entertainment).

CJ: You’ve previously featured Doug Trumbull talking about the cutting edge of cinema and technology. Do you see the medium becoming a more immersive experience?

Julian Pinn: ‘Immersive’ is a great word but it’s not defined. Some think it means bigger picture, some think it means better picture, and some both. Doug was a superbly enlightening keynote speaker at IBC Big Screen in 2014; he understands the technology-mix, theatrics, event, and showmanship perspectives that make up the cinema experience.

Cinema is not simply another AV screen but an alternative to other social entertainment events and the industry very much needs people like Doug Trumbull as it contemplates all the experiential innovation currently on offer.

The key question is really over which of these new formats cinema should embrace in order to be more immersive whilst maintaining the winning formula that was established by the pioneers over one hundred years ago and honed since.

CJ: How does VR sit within the IBC Big Screen stream and can head-set technology be considered a ‘big screen’?

Julian Pinn: How VR sits within cinema itself, and thus within IBC Big Screen, is a hot topic to which nobody yet knows the answer! However, not a day goes by without some kind of VR-Cinema-related news item being released.

VR contrasts to cinema in being a solitary medium. However, and especially with the adoption of virtual production in films, VR is offering studios a valuable tool that enables them offer their target market an alternative promotional experience to the classic trailer that puts people right in the movie/story environment.

Like cinema, VR is looking to offer audiences a level of immersion never before witnessed but as Ang Lee himself said at NAB earlier this year, “I think my edit is better than yours!”. Cinema, however, should watch VR closely.

CJ: What can we expect to see and hear in terms of other technologies showcased, such as light-field, virtual sets, immersive audio and motion capture?

Julian Pinn: The conference stream starts on Friday 9th September with Derek Bradley of Disney Research and Matt Rank of Industrial Light and Magic who will be offering a ‘science and application’ session over the application of the last technology and techniques in motion capture as used on “Star Wars: The Force Awakens”.

We will also be looking at the future where it is becoming possible to control in post-production the final performance from multiple takes of live action footage – amazing R&D. The next day, we will be hearing from Jon Karafin of Lytro and Siegried Fößel of Fraunhofer IIS who will be presenting on Lightfield, showcasing some amazing magic that literally resets our concept of capturing motion-pictures.

Later that Saturday, we are honoured to being holding a masterclass on virtual sets and virtual production with special effects supervisor, Kevin Baillie, and with recorded commentary from director, Robert Zemeckis, who will describe the creative and technical challenges encountered and overcome in the creation of Sony Pictures “The Walk”. Kevin will also showcase some related work that was leveraged to make the spectacular opening freeway chase in the hit movie, “Deadpool”.

Sunday is the critical updates day. Not only will the EDCF host their normal quick-fire round-up from the world’s technology experts, the morning will start with an update on the adoption to date of laser illumination before we indeed move on to immersive audio.

The key question here is to ask and discuss with key stakeholders representing content creation, technology suppliers, studios and exhibition if the open standards effort is indeed managing to balance the needs of the market and what outstanding business issues and other hurdles need to be solved in parallel to the open standards work.

CJ: Can you tell us a bit about the films that will be shown and why they were selected?

Julian Pinn: Monday night’s movie is still to be announced but we are delighted to be supported by The Walt Disney Company this year with our Saturday night movie screening of Jon Favreau’s “The Jungle Book” in Dolby Vision High Dynamic Range.

We selected this movie, not only because of its superb enjoyment factor, but because it nicely demonstrates not only HDR but the technique of virtual production as a perfect follow-on from Kevin Baillie’s preceding masterclass.

CJ: How do you go about transforming the RAI Auditorium into a cinema environment?

Julian Pinn: IBC has wonderful long-term supporters such as Christie, Dolby, Harkness and QSC who provide an enormous amount of cutting edge equipment and technology each and every year. Moreover, we are blessed with their world-class projection and sound engineers who are onsite, many of whom for weeks, to convert the RAI Theatre into the technical marvel that is the IBC Big Screen, which is not only a state-of-the-art cinema showcasing—often for the first time ever—the very latest in experiential innovation, but a conference venue that can cater for multi-speaker presentations and open discussions.

CJ: Cinemas are now on a seemingly permanent upgrade cycle. How can IBC Big Screen help them make sense of what’s next?

Julian Pinn: This is one of the most critical questions that the industry must answer. Cinemas have moved from a film-based electro-mechanical playback environment, where equipment lasted decades (if oiled regularly!), to effectively a digital IT playback environment, which is famous for requiring almost constant firmware upgrades—in order to not be left behind—and much more regular equipment upgrades than cinemas have ever before experienced.

This is a new mind-set that cinema operators must embrace and that they or the collective industry must budget for—especially now that the VPF mechanism is all but history and unlikely to be renewed. One basic example is the slow speed and complexity over moving from Interop DCPs, which was only meant to be a temporary step, to SMPTE DCPs—which is actually the 1.0 basic vanilla version of D-Cinema as codified so many years ago.

If you now add to this the plethora of experiential innovation currently on offer, ranging from HDR to motion seating, and the hundreds of versions with which studio-distributors must now contend, the potential revenue-add (if any) from these new digital enhancements is much harder to quantify than the savings that vanilla DCPs originally offered over 35 mm prints.

To that point, the Big Screen Experience conference will close with a pivotal session, “Digital Cinema Investment 2.0 – where’s the ROI?”, featuring panellists from CinemaNext, Barco, and Vue International, looking at whether the numbers are stacking up for continued digital investment.

Together with the Monday night movie, this session really is the perfect way to round off the conference that each year aims to cover the salient topics of the art, the science, and the business of the motion-picture industry from content creation to exhibition on the big screen.

CJ: Thank you for talking to us and see you in Amsterdam.

Celluloid Junkie will be at and reporting from IBC 2016.