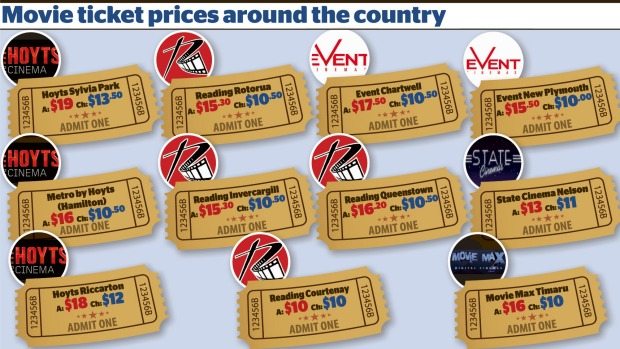 New Zealand – Reading Cinemas has dropped the price of its standard tickets from NZD 16 (USD $10.83) to NZD $10 (USD $6.77) indefinitely in both Wellington and Auckland. Gold Lounge tickets are now just NZD $15 (USD $10.15), i.e. cheaper than what standard tickets were before. Commentators says that this could herald a price war with larger competitors Hoyts and Event Cinemas. Lots of complaints about cinema going being too expensive in New Zealand. TVNZ – 18 May 2016

Ireland (Rep.) – Meanwhile it costs a family of four over €100 for a trip to the cinema in Dublin, if they pick Cineworld (€62.80) and two medium drink and a popcorn (€40). The Consumers Association of Ireland calls cinema price rises  “outrageous” but Cineworld defends itself that families can take advantage of ‘Family Special’ combos and watch films off-peak. Despite this “outrage” Ireland has amongst the highest cinema going in Europe. Dublin Live – 16 May 2016

France – On the sidelines of the Cannes Film Festival French film authorities, led by audio-visual regulator CNC, signed an agreement to ensure programming and distribution of French films in French cinemas and other outlets. It was signed by FNCF, l’Afcae, l’Acid, la FNDF, Dire, le SDI, l’Api, l’UPC et le Spi, l’Arp et la SRF, la SACD et la Scam, le Sfaal, le BLoc, and the French Writer’s Guild will also sign it. The three-year agreement will for example prevent a single blockbuster from taking over all or most screens in a multiplex at the expense of smaller films. Allocine (FR) – 13 May 2016 China (P.R.) – Ticketing software major Vista Entertainment Solutions (VES) has signed China’s third-largest cinema chain. Jinyi International Cinemas trailed VES’s software in 19 of its 138 cinema sites, and will be rolling out the VES ‘Super Cool Online Platform’, (“designed and developed in response to the distinctive needs of the Chinese exhibition market”) over the next five weeks. Press Release – 17 May 2016

India – India’s #3 cinema operator Carnival is stepping up competition with PVR et al with plans to have 1,000 screens by 2018, up from 324 currently. “We already have about 160 screens in the pipeline, which are in the developing stage. Some screens should become operational from July. By the end of FY17, we will have more than 600 screens,” Carnival Group chairman Shrikant Bhasi is quoted as saying. Last year Carnival said it would have 1,000 screens by…2016. Then the 1,000 screen target date was shifted to 2017. Make that a large pinch of salt with your Carnival Cinema popcorn. Economic Times – 18 May 2016

Spain – The International Cinema Technology Association (ICTA) will once more host its technical expert seminar prior to this years CineEurope. Come and hear Phil Clapp (UNIC), Oliver Pasch (Sony) and several others share their insights. And there is a party in the evening too. Well worth attending. Press Release – 17 May 2016

Japan – Cinemas in Japan are testing screening recordings of Kabuki plays as a means of expanding native event cinema offerings. Cinema Kabuki “Kabuki NEXT Aterui” was screened at the Tokyo Shinjuku Piccadilly cinema on 17 May 17, with stars Somegoro Ichikawa, Kankuro Nakamura and Shichinosuke Nakamura there on stage to introduce it. Natalie (JP) – 18 May 2016

Japan – Grand Theatre has introduced a VIP leather-recliner auditorium in the Ion Okayama’s Ultira screen multiplex. There is also a private lounge and you can enjoy alcoholic drinks there up to a hour before the screening for a reasonable JPN ¥2,500 (USD $22.83) that includes the ticket too. NLab (JP) – 16 May 2016

UK – Newcastle is getting a roof-top cinema as part of the re-development plans for the old Cloth Market.

The Ladhar Group’s leisure division Crafted Projects last year announced its £2.5m vision to bring White Hart Yard, a complex collection of historic buildings in the city centre, back into use, transforming them into a destination development to rival London’s Shoreditch and Borough Market.

As well as shops, restaurants and bars there will be a rooftop terrace cinema. Chronicle Live – 16 May 2016

The former Cheap Flicks theater at 15375 S. Helmer Road has undergone a complete overhaul since it was purchased by Moore Theatres in 2014. It was part of an expansion plan mapped out by owner Carol Moore, who hand-picked the long-vacant property to join her stable of theaters.

When it re-opens the seven-screen cinema will be a first-run theatre. Battlecreek Enquirer – 17 May 2016

USA (MO) – Springfield’s Campbell 16 Cine will be closing on 31 July. “Kelly Hoskins, Wehrenberg Theatres’ vice president of marketing, confirmed the close Monday morning. “I will tell you that attendance has been declining, and it’s made it impossible to keep the doors open,” Hoskins said.” The cinema has been running for 20 years and bigger chains have moved in with Regal buying the cinema at downtown’s College Station and AMC acquiring Springfield 11. Wahrenburg dropped cinema ticket prices by 20% in 2015 but it was apparently not enough to reverse the decline in audience numbers. News-Leader – 16 May 2016

For those of you in Cannes or can’t go but are interested in what goes on on and off the Croisette, Stephen follow’s advice and insights are priceless. In his recent post he explains questions such as:

Best of all is that he does it using Nicolas Cage as his spirit guide. Do read it.