The European Audiovisual Observatory (EAO) has released its box office (BO) figures covering the 28 countries of the European Union, showing solid growth in 2015. Unlike previous BO data from UNIC and Europa Cinemas, this data for EU member states excludes growth markets such as Turkey and Russia, as well as smaller ones like Norway and Switzerland, though these get a statistical look-in. Overall the picture is positive, with some significant caveats.

There was good news in a record box office high of €7.3 billion, up 16% year-on-year and the highest ever not adjusted for inflation. Admissions grew to 976 million tickets, representing an uptick of 7.4% and the highest since 2009 when “Avatar” was released. But there was also a significant 26.1% drop in the market share of European films, even as EU film production rose to 1,600 films, confirming the criticism that too many European films that too few people watch in cinema get subsidised.

What is particularly interesting is that box office was up in all 26 EU territories for which final data was available, with France standing out as the significant exception (more on this, Europe’s largest cinema market, later). As EAO notes, “This represents the most homogenous growth trend across territories observed in at least the past ten years.” This means that Hollywood titles lifted all cinemas, even in markets where an absence of major local hits would otherwise perhaps have dragged the market down. Not surprisingly Studio titles accounted for 18 of the top 20 films, with “Taken 3” (France) and “Fack Ju Göthe” (Germany) the only European titles, unless you accept “Spectre” as a purely British film. 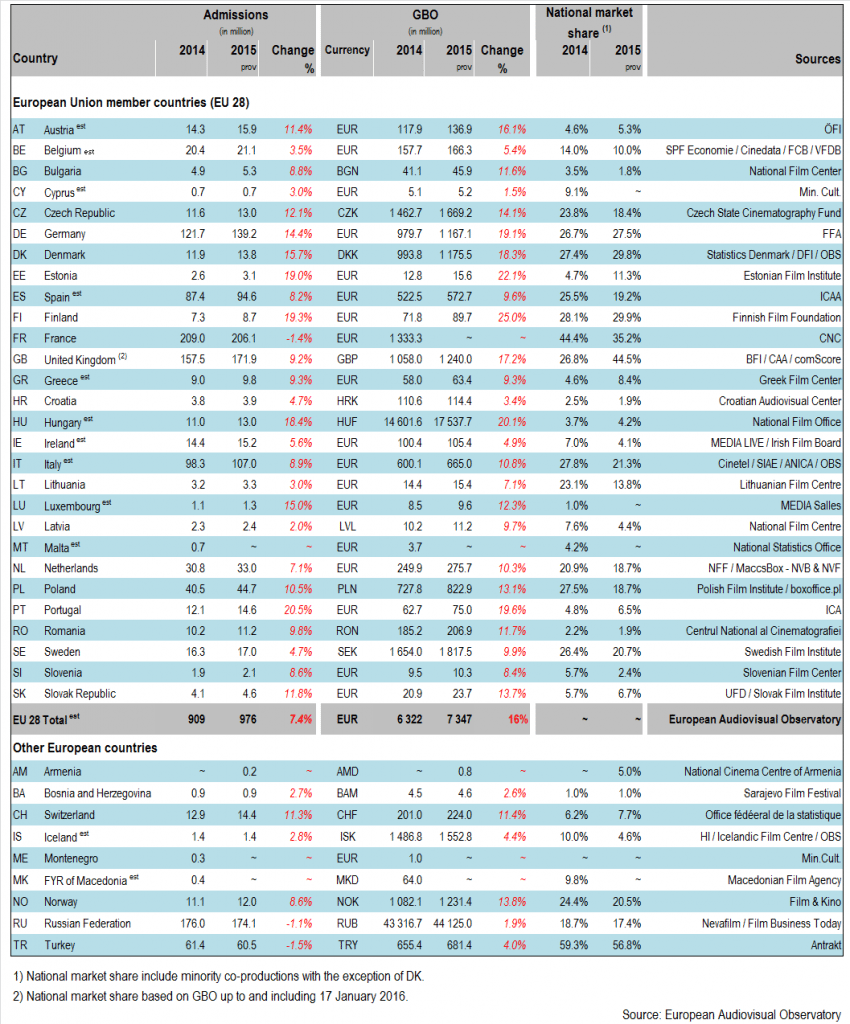 Just as the strong dollar meant that global takings were USD$38 billion, rather than close to USD $40 billion based on the exchange rate a year earlier, so to currency fluctuations played a role in the EU. A strong end-of-year showing in the UK means that together with the pound rallying against the Euro, there was increase of almost €400 million (+30%), which even Germany with an increase of €187 million (+19%) couldn’t match. Average ticket price went up from €7 to €7.50. Outside the EU, Russia held onto its slot as the second biggest European market, even with a drop in admissions of 1.1% and BO decline of -1.9% and is almost three times as large still as Turkey, the second biggest non-EU market.

Four films topped the charts: “Star Wars: The Force Awakens” (39.8 million admissions), “Minions” (39.5 million), “Spectre” (37.9 million) and “Jurassic World” (30.4 million), while in 2014 not a single film crossed the 30 million admissions threshold in Europe. Interestingly US movie market share was largely static at 64%, up less than one percent from 2014’s 63.2%. But European films produced with Hollywood money, such as “Spectre” and “Kingsman: The Secret Service” grew their market share from 0.4% to 7.3% compared to the previous year.

This meant that it was the market share of purely European produced and financed films that suffered the biggest decline in 2015, shrinking from the 33.5% record level in 2014 to just over a quarter at 26.1%. The local market share was higher in some territories, such as France (35.2%), Finland (29.9%), Denmark (29.8%) or Germany (27.5%). We leave it up to you as to whether the UK really had a 44.5% market share in local films, when one of those films was set in a distant galaxy a long time ago, while UK independent films (as defined by the BFI), means that the market hare was 10.6% in the UK. The three worst countries for local film market share were Slovenia (2.4%), Romania (1.9%), Luxembourg (1%). Turkey continues to astonish with an 56.8% local market share, only slightly down from last year’s 59.3%.

What is particularly troubling is that the drop in domestic box office is not because films are not getting made in Europe, but because more films are getting made, but fewer people chose to watch them in cinemas, or probably anywhere else for that matter. Many of these films get significant subsidies, meaning that public resources in times of austerity get diverted to films that may have artistic merit but little public appeal. Co-productions accounted for 24% of all films made in Europe, lending credence to the jibe about unwatchable ‘Europuddings’. Sadly it is a brave person who stands up at a forum in Berlin, Cannes or Venice and says “we need to make fewer (but better) films.”

The odd one out in this analysis is France, which remains Europe’s largest cinema market, but for which only admissions but not final box office figures are available from EAO [though France’s CNC puts BO at €1.33 billion]. Here there was a contraction from 209 million in 2014 to 206.1 million attendances in 2015. By way of comparison, Russia had 176 million, UK had 171.9 million, Germany 121.7 million and Italy 98.3 million, so there is no chance of dethroning the country that invented cinema from its top spot any time soon. But what are the dynamics pulling down France, not least as a French film (“Taken 3”) placed in the European Top 20? 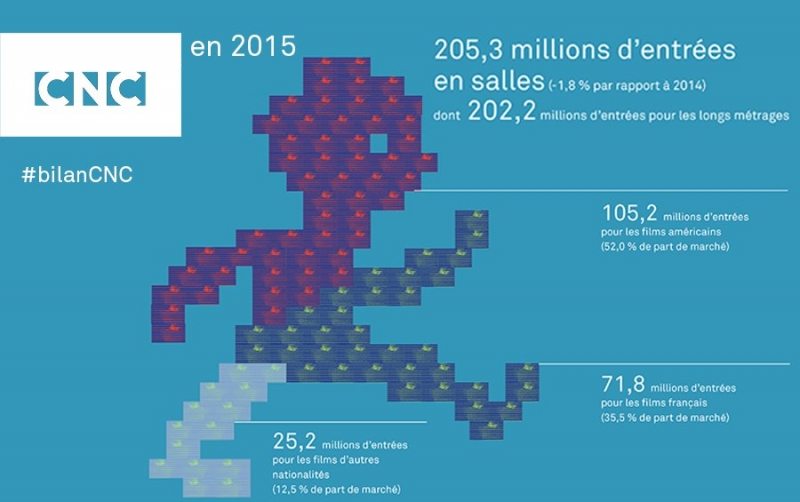 March of the Film in France (source: CNC)

First the good news: youth cinema attendance in France hit a 22 year high. Almost 13 million people under the age of 25 went to the cinema in France in the past year. The highest increase in attendance was in the critical 6-14 age bracket, with a 6% year-on-year growth. This can probably be attributed to the success of children’s films like “Minions” (interesting side note: Illumination Entertainment which made the film is based in Paris), but perhaps just as importantly to the ‘€4 under 14’ scheme that allows children in this age bracket to watch any film at any time for just four euros. If there is any country that is winning the battle for young cinema goers, i.e. the audience of the future, it is France.

In the higher age brackets, at least 90% of 15-19 year olds went to the cinema at least once in 2015. Overall cinema remains the premiere cultural event for French people with an average of 5.3 visits to the cinema per year. While regulars, who account for 33.5% of cinema goers, visit the palaces of the 7th art at least once a month. France also dominates Europe with 5,741 screens totalling almost 1.1 million seats. And France maintain a cinema culture even against an explosive growth in video-on-demand, which grew a staggering 182% in 2015 (much of it no doubt driven by Netflix, which launched in France in late 2014), with a turnover of €82.5 million, of which feature films represented 75% of all online viewings, with US films dominating here.

So with revenue holding steady at €1.33 billion, how to explain the decline in attendance – which is what France holds as the key yardstick by which to measure the strength of cinema, rather than box office – that went down 1.8%. The explanation lies in local films. Even though “Taken 3” is counted as a French film and made the pan-European Top 20, much of its earnings came from outside of France, where it was significantly not the most successful local film of 2015.

That honour belongs to “La Famille Bélier”, which was the third biggest hit of the year after “Star Wars VII” and “Minions” with 5.35 million tickets sold. Overall 14 French films crossed one million admissions, but so too did 26 Hollywood films. The lack of a bigger domestic hit, such as 2014’s monster hit “Qu’est-ce qu’on a fait au Bon Dieu?” is what kept French cinema and cinemas from their full potential. But it is still number one and critically winning the battle for young viewers. Even with the twin Paris terrorists attacks of 2015, France remains the beating cinema heart of Europe. 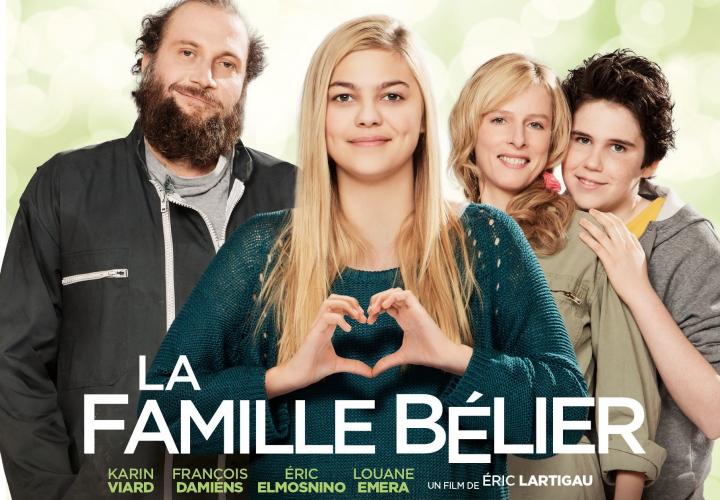