Provisional European cinema attendance figures for 2015 have been published by both UNIC and MediaSalles, showing an overall growth in both BO and attendance on the previous year. A slew of Hollywood blockbusters helped European cinemas overall, though it was local language hits (or lack thereof) that made the difference on a territory-by-territory basis. As before there were regional trends at play and some underlying worries for long term developments.

The UNIC Update on Cinema Going in 2015 (PDF) saw the cinema trade body of European cinemas record an increase of 7.6% in total admissions for EU territories, while the overall attendance for all UNIC territories went up by 6.0% in 2015 for a total of 1.2 billion. The biggest box office increases were in UK (+17.3%), Germany (+16%) and the Nordic territories (topped by Finland’s stellar 25.5% increase – the largest jump in Europe). Admissions were strong too, with +14.4% in Germany and +18.9 in Finland, by way of comparison. Southern Europe did well, while France and Turkey strayed into negative admissions growth.

Central and Eastern Europe continues to be a story of growth and success, with Poland sailing up as on one of the largest European box office territories with more than 40 million admissions. The country saw a growth of 10.6% in admissions and box office was up 13.6%. In the rest of the region growth ranged from very good (Bulgaria BO +11.1%) to excellent (Hungary’s BO at +20.1%). Only Russia slowed with +2.1% BO growth and +0.3% admissions increase, though given the economic challenges facing the market it is remarkable that any growth was achieved.

Provisional admissions for all the surveyed UNIC territories came to an average of 1.5 visits annually, with France and Ireland topping the league with 3.1 and 3.3 visits per inhabitant respectively. The success of the likes of “Furious 7” and “Star Wars VII” is expected to have pushed down the overall marketshare of European films. Full figures will be published later this year.

On points of trivia, Slovenia saw the biggest drop with a -5.3% drop in box office and -11.3% decline in attendance. Ouch! Box office for figures for France, which is Europe’s biggest cinema territory, are not available yet. The Belgians continue to squabble too much to provide any useful recent numbers. Savour the irony that this is where UNIC is headquartered. “Spectre” was the #1 film of the year in the most territories (eight), followed by “Star Wars: the Force Awakens” and “Minions” in joint second place (six), with local films topping four countries (Norway, Poland, Spain and Turkey), while “Inside Out” was the biggest film of the year in the last remaining territory (Italy).

MediaSalles launched their annual statistics during the Berlin Film Festival, served up with generous amounts of sparkly wine (Sekt?), canapés and yellow nail polish. Unlike the UNIC statistical overview the MediaSalles findings also include a detailed look at the digitisation situation in Europe.

UNIC and MediaSalles typically follow each other fairly closely, with slight differences based on which territories are included overall. The press release title proclaimed that “In 2015 more spectators (+5.2%) in Europe’s cinemas, while digitization reaches 95% of screens” putting it a little lower than UNIC’s 6%, but with a total admissions of 1,210.5 million total.

“2015 was a good year for European cinemas. The increases in admissions and box-office concerned practically all the countries analysed by MEDIA Salles, unlike those years in which – as in 2014 – a generally positive result for Europe concealed marked differences, with some countries recording growth and other territories dips, even considerable ones,” comments Paolo Protti, President of MEDIA Salles.

The stand-out territory was Portugal with +20.4 admission increase, one-tenth of a percentage point ahead of Finland, though Finland beat Portugal in BO growth – so take your pick as to which is more important. I chatted to a  Finnish colleague at the MediaSalles event and while not news to him, he was fairly incredulous at how well it had been going for Finnish film in the past year. Though he did not think that the winning streak would be sustained this year.

Germany is back in the kind of admissions territory that it had not seen since 2009, though there is still the persistent worry that this is a temporary blimp in a longer overall decline. France remains the largest territory with well over 200 million admissions, while on the other end of the scale Lichtenstein saw 19,000 spectators buying a cinema ticket. While Belgian data also alluded MediaSalles, numbers are expected to be positive, while “[i]t can already be stated that Flemish films gained positive results in terms of audiences in 2015.”

Unlike UNIC the Russia figures according to MediaSalles saw a -0.2% dip and Turkey was also down by a more significant -1.5% (UNIC had Turkey admissions growing +2.7%). But as MediaSalles notes, “These are nevertheless countries that have seen the highest growth rate in terms of spectators in the whole continent over the past few years.”

Unlike UNIC the marketshare numbers for domestic films are available in the MediaSalles report, which range form the abysmally low (Romania’s 1.7% and Bulgaria’s 1.8%) to the spectacular (Russia’s 17.2%, Czech Republic’s 18.4%, Poland’s 18.7% and Turkey’s continuously stunning 56.8%). 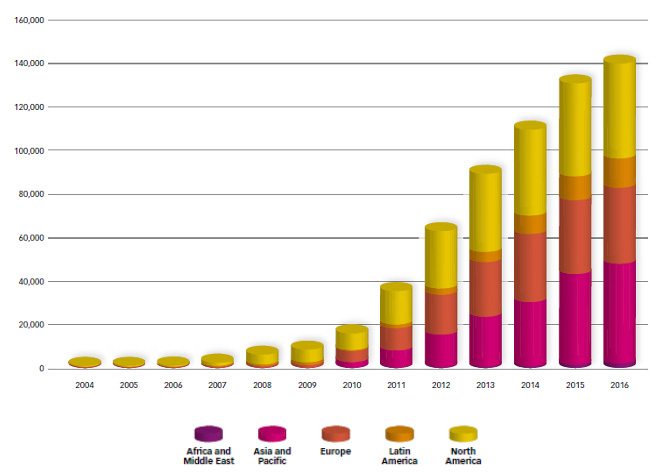 Perhaps even more interesting is the focus on European digitisation, which has reached 95% across Europe as of the start of 2016 according to MediaSalles, with 36,200 digital projectors. This is a six percent increase on a year ago. There was considerable digital activity in the previous 12 months in several territories scrambling to complete the transition:

In 2015, over the twelve-month period, a clear acceleration in the rate of conversion to the new technology was to be found in some of the (now few) countries that have not yet digitized all their screens. This is the case, for example, of a large market such as Turkey, where the rate of digitization rose from 55% to over 80%, with a particularly significant rise in the first half of 2015. A similar increase to also to be seen on a smaller market, like Latvia, where it grew from 69% to over 90%. Estonia, too, recorded considerable growth: digital screens, which represented 49% of the total at the start of 2015, now touch on 70%. This level has now also been reached by Greece, where digital projectors had been installed on 46% of screens at the beginning of 2015.

With France, Germany and UK having already completed digitisation earlier, the other three in the BIG Six were close to catching up, with Russia at 99.9%, Italy on around 97% and Spain at 92% approximately. There are 1,900 analogue screen left on Europe, or as Elisabeta Brunella said at the gathering, “1,900 that will either go digital or die.” Even as VPFs start to come to their end in some territories (Austria), neighbouring Czech Republic is thus still struggling to save its many smaller rural cinemas. Greece presumably has bigger worries than digitising its remaining 30% of projectors that are still 35mm.

The MediaSalles announcement ends on a sad note as we remember somebody who was not with us to toast a good year.

Whilst publishing the latest statistics and announcing the presentation of the new DiGiTalk, to take place on 13 February in Berlin, MEDIA Salles remembers Dr Joachim Ph. Wolff, who left us on 10 January 2016 in his home at Bilthoven (NL). It was thanks to Dr Wolff, a founding member of MEDIA Salles and for several years an Executive Committee Member and Treasurer, that MEDIA Salles’ work on research and information was launched and continued to benefit from his passion and professional competence.

Dr Wolff, we thank you and salute you.