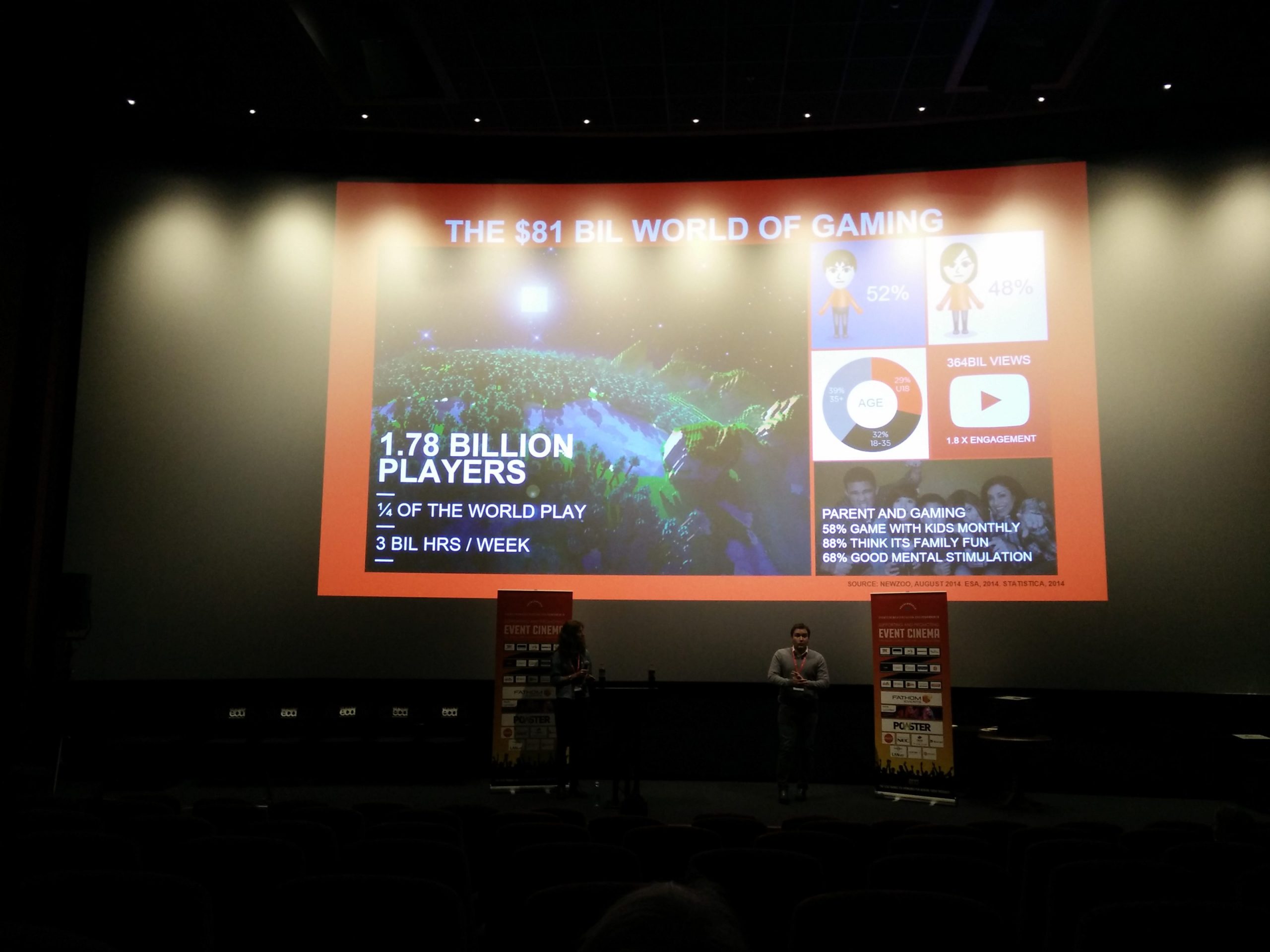 This is a live transcript of the presentations made at last week’s Event Cinema Association conference held in London. As such we sometimes paraphrase what is said on stage and any errors are most likely the fault of the note taking and not the speakers. 100% coherence is not possible as we often include both what is spoken and shown on screen.

While all three were interesting topics, it was not possible to split myself up, so the choice was made to hear about gaming, or eSports in cinemas, presented by Corinne Thibaut (only half-jokingly introduced as “the Queen of Cinema”) and Alban Dechelotte, responsible for Music and Gaming at the Coca-Cola Company.

“We strongly believe that looking at new contet could drive more traffic. Previously opera and ballet are not engaging for teens (only music is), so we thought of eSports. Teens overall [present] a challege for Coke, because it is their parents’ top brand and they want to differentiate themselves.”

Corinne and Alban then gave some eye-popping statistics about the size of the global gaming market (see photo above).

Then followed several more slides, the key data from which was:

eSports – The main point is not playing but watching.

50 euro tickets to watch League of Legends (LoL) sold out in less than 5 minutes. Beating Rolling Stones and other big acts in the same arena.

League of Legends has 80 million monthly players and 25 million weekly. [It is] Modelled on the NBA tournament.

World Final [is held] this week. Wembley, yesterday, Brussels next week, and finale in Berlin in a month.

Coke made the points that unlike other sponsors, “We don’t partner the teams but the organisers.” [This is true of not just eSports, but also the Olympic Games and FIFA.]

Deal with Riot [the LoL organiser] – “Coke don’t have to pay for right but delivers a high class event that delivers a unique experience to fans,” in cinemas.

“Business case is simple – all the box office revenue goes to exhibitor, Coke only take a small charge to deliver the event, plus offering fans swag and giveaways. What they really like is to share the experience.”

“Their parents think they are freeks, friends think they are geeks. We create a second space where they can share their passion. We elevate eSports to the level of regular sports.”

“There were five intermission – i.e. lots of opportunity to spend money on food and beverages. This was a unique experience with very special crowd. As exhibitor you don’t reach this crowd if they are sitting at home watching games on laptop (and might be pirating [films]).”

Targeted communication – localized in 8 languages – promoted across Riot’s channel. Including the client, the patcher [?], social media, and LOL website.

“Also the Reverse Feed, with GoPro camera you could see what is going on in cinema and include that in the global stream. Exhibitor doubted if people would come at 7am in Marseille on a Sunday morning. [which is when the LoL tournament kicked off in South Korea] But they did. In droves.

Not using satellite but internet for 5 hour event – with 5 intermissions.

“Soccer and music is familiar with exhibitors and Coke, but eSports is different and unknown. Kind of like Rock’n’Roll was [said to be] ‘evil’ to your parents generation. We want to be part of the new rock’n’roll.”

“86 cinemas will participate next week – and that’s not enough. Discussing doing satllie disibution. LoL is 50% of all eSports (like soccer is to regular sports), but there are other ones too.”

Corinne and Alban finished by putting up a slide of ‘Our Journey So Far’ that gave the stats of the cinemas involved.

Questions from the audience.

Question: What about using satellite to deliver the stream?

“We need quality test to have option of doing [the streaming of LoL] via satellite. Better quality on big screen.”

Berlin is where the actual LoL event takes place. In some territories they prefer their local language host that are casters and comment. This is the feed we put into the local French feed. In Italy the fans voted for the English [language] feed. 86 cinemas, 6 languages. Nobody had a complaint about quality on cinema screen, because the benchmark is screen at home (latop). Fans care more if they don’t get their own champions cup swag.”

Question: Can any cinema join?

“We need to plan with Riot and have sufficiently advance notice. Need enough screen but not too many screens. So we grow slowly to slowly reach saturation. We could have been on 121 screens in Germany, where it is played, but went with 28. But you [i.e. the cinema]  DO need to be a Coke partner.”

“Create a sustainable product that attracts youth back to cinemas; that was our brief.”

“We went for an average of twice of a regular cinema ticket because 5 hours takes up two films’ slots. But we have to rememeber that they can get it for free in the home. We have not had any pushback in online forums.”

“The content in home and cinema is exactly the same. Swag and sharing of experience is the added value. We work hard to make every screen full, because half full is only half an experience.”

“No advertising and marketing during intermission. LoL is free to play but they get in-game purchases and pre-roll.”

“Cinema channel is very parent-friendly. They are used to sending their kids there. Safe. Won’t send them to Berlin [to watch the LoL final].”

And with that we came to the end of fast but informative session on the cutting edge of event cinema. Apart from Coke and Vue, which has created a dedicated eSports auditorium, nobody else is doing this in a major way – yet.