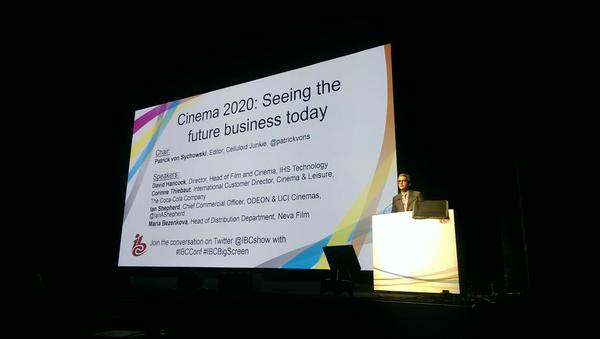 As the session’s producer I introduced it with the explanation that the aim is to try to look five years into the future to see which trends today will have the biggest impact on cinema going in the year 2020. Half a decade is close enough to discern likely future patterns, while at the same time indulging in a bit of blue sky thinking. Did you know, for example that in 2020 India will send a manned mission to the moon, China will complete its orbiting spapce station and California will have its first high-speed railway connecting Francisco to Anaheim. So what do our four speakers foresee?

“Cinema 2020, that’s five years, not that long away. Things move very fast or not as fast as we expect.”

“The centre of gravity for cinema is shifting. Back in 2004 North America was the biggest market. International market has [since] grown to 70% of total B.O. [box office]. You are now making films for “elsewhere”. The strongest contender [in this regard] is Asia. 44% of global B.O. is Asia and 25% is China. That will influence the kind of films that get made.”

“Centre of gravity is moving eastwards. Not just distribution, but also production. 50 odd countries have tax credit to attract prodction. You are creating content in a different way. In China 88% of screens are 3D equipped.”

“More and more cinema is for the BIG, the Event, the Experience” 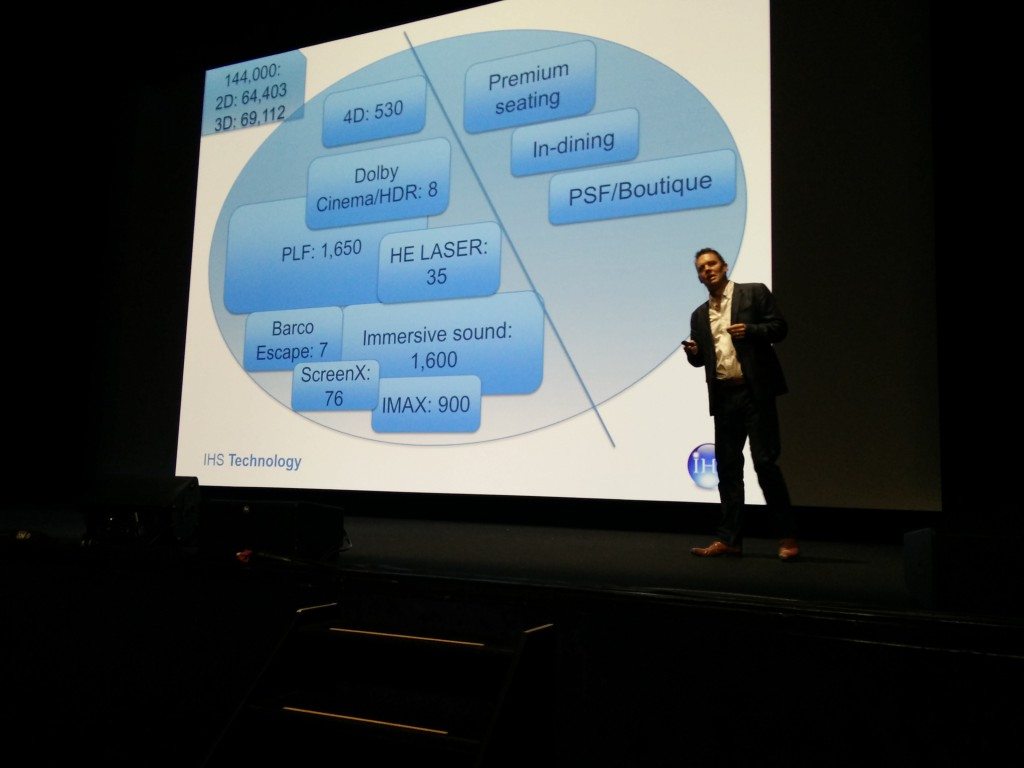 Premium cinema PPT slide shows:
– Breakdown of transactional model of Home Entertainment
“Cinema is reinforcing its Premium Status, not only with film types and pricing but with experience”
– Technology has opened up the possibilities of cinema to segment itself further and to offer even greater content based experience

“Defining ‘Premium’ is what preoccupies me now.”
2,500 screens are premium: PLF, Atmos, ScreenX, etc.
“But what happens to the other screens? Will cinema only be a premium environment?”

Has worked for Coke 17 years and cinema for 4 years.

“You have to recruit the next generation – thats not just true for cinema but all business.

We have to reinforce habit of going to the movies. This is a habit we all grew up on. But we have to develop and keep recruiting teens to cinemas.

Teen admisisons are decreasing. There is competition of leisure activities.

We [at Coca-Cola] work in beverages but we have insights.” She then sets out some of those insights.

“PRODUCT: Content (is King). So having good content [films] is critical. What are teens passion points? What will bring them to the movies? Gaming is high on their list. Gaming is an $81bn worldwide – more than movies and music combined. 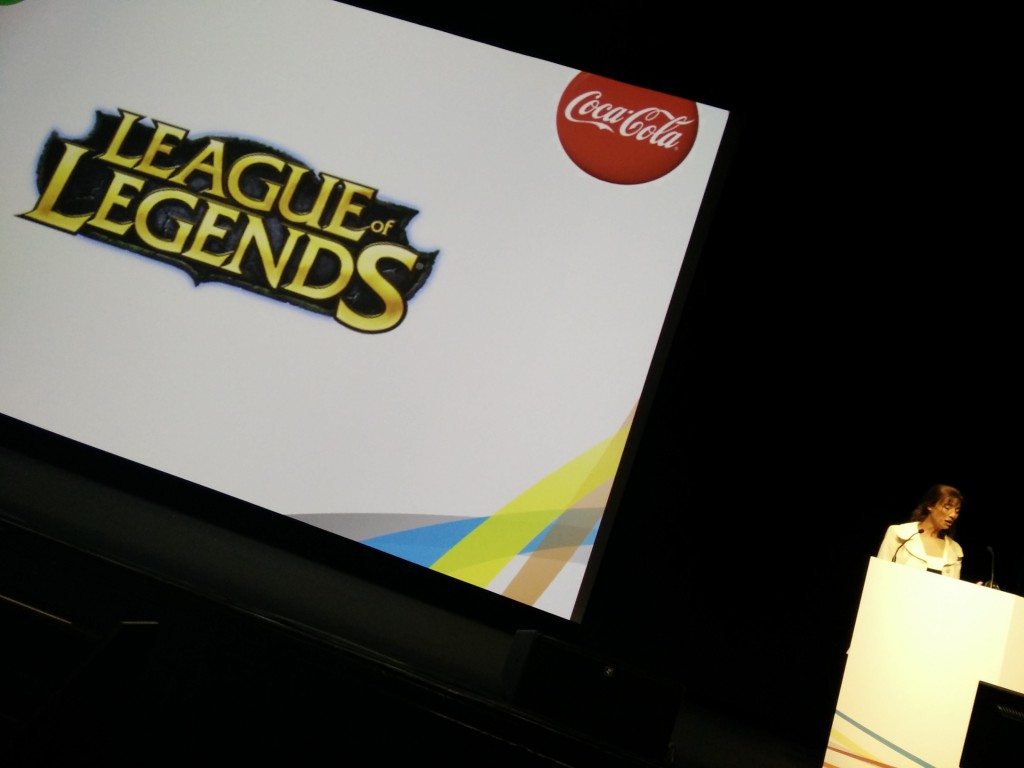 League of Legends – 75 million people play regularly. Staples Centre 2013 sold out. This is a massive opportunity for cinema. It s like a sports league, but for gaming. Live audience 40,000 and online audience of 45 million. Bring those together in cinemas with live streamings.

There have been many attempts to bring gaming to cinema, which have not always worked, but this one seems to be a success. This hits the key target group. We use the social media of League of Legends parent Riot to reach them. We have also included a reverse feed for the stream. Final was Sunday morning 7am and still there were long lines in cinemas in France.

PROMOTION – Opportunity between Exhibitors – Distribbutors – 3rd Parties to drive traffic.
We are seeing more and more collaborations to work togehter, even though not always easy.

PRICE – Average ticket price has remained flat in Europe, because while you have premium pricing but there is also heavy discounting and the cheap days can perform better than weekends. Teens would rather spend 10 euros to charge smartphone than to spend that money on lunch.

– Kinepolis Spain have converted one screen into an indoor playground.

The kind of era of big megaplexes is over and we are moving to smaller venues. Just like Hypermarkets.

Upscaling the offer to Premium – Hoyt’s LUX. They don’t see themselves as a cinema with bar, but a bar in its own right that also have a cinema.

You have a future business only if you have a sustainable business today.”

“First to bring a cinema perspective to this tricky question. Last time I was at IBC was 2003. I was running interctive TV business for Sky. We were looking at a business that was changing rappidly and what did that mean for our business and business models. In the face of uncertainty we should start with some facts.

Despite all the new offerings, people still go out to the cinema. Anyone looking at this graph would have to say that cinemas are actually doing Ok. But there is a key question: why? History is full of technologies that were doing just fine and then they were wiped out.

We need to put our marketing hats on and figure out what the benefit is that cinemaas are delivering to customers and how can we improve that.

It is a completely unfair comparison. Because cinemas is not just about food but about friends.
The cinema is not the same things as consuming films at home. It is a collective, immersive, transportive experience.
And it is also a great technical experience, thanks to 1000s of people, including many here today. 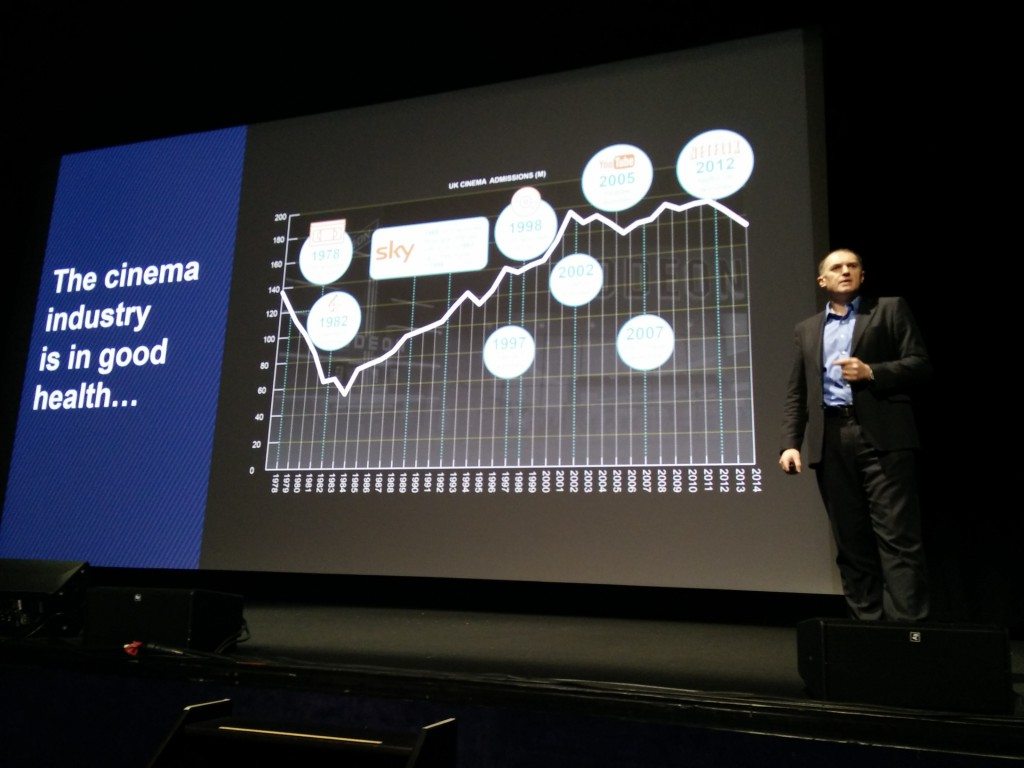 Insight: Cinema is a hospitality business first and foremost. Our competiton is not your TV or mobile phone but other things you can do when you have a free evening. You will come to cinema more often if you are having a good time. Think about KPIs. Cinema is full of BO and average ticket price and retail spend per head [data]. We now measure customer satisfaction in all of our cinema every week.

Number 1 of giving a good experience to customer and it is whether when someone walks through the door they are met by somebody greeting them with a friendly smile. This sounds a bit fluffy, be nice to people, sounds inconsistent with the hardcore technology investments we make.

Hospitality is rooted in insight. We can’t remember everyone of our customers’ name, but we can improve data and insights that this creates. But also bring in what experience have people had on their website. What did people tweet about. As you bring in Wifi capabilities to cinema you bring in location and mobile identity. This allows the right conversation with the right customer about the right film at the right time.

Next insight is understanding people’s digital lives. Hospitality begins and ends online. If you book a ticket for a film on Friday, what will the cinema do between now and Friday to get you excited about that experience? And that continues after they leave the cinema: How do I talk about it and share it with friends?

Our journey is just begining. Before > Pre-performance > During > After

We are at the very foothils of that journet. But I have some evidence that we might be right.

UK cinmema attendance rose 7% in the first half of the year. Attendance in our cinemas rose 14%, which shows you that we are growing our market share. Our profits doubled.

I don’t think any of that growth came at the expense of our competitors. You are not stealing but getting customers to come more often. We end up growing the pie for everybody.

We only have some of the investments in data and more that we would like. We launched our Innovation Lab at CineEurope this summer. Testimony is that we have had more than 90 conversations and 5 have turned into actual tests and there are a next tranche. Themes are social, payment and gameification coming forward from tiny businesses of one or two people with a technology. The answere can come from innovators.

We’ve had a good run but we can have an amazing run between now and 2020.

Only the cinema can transport you. The next 40 years will be pretty darn good.”

Starts off with a primer on comercial cinemas in modern Russia.

“Massive screen and digital growth between 2005 and 2015. 97% are digital screens. But there has also been a change of business model from one screen cinemas to multiplexes.

Ticket price grew but has gone down from 4.80 euro to 4 euro. Film admission has also been affected by the economic crisis. Average admissions per capita and screen density are low. Also decline in the city population in the age of 5-24.

Event cinema in Russia – consist of five parts; Classical ballet and Opera, Concerts and Educational projects. No sports. Live events [like MET Opera and NT Live] are not popular due to time difference. Event cinema ticket price has dropped from 5.30 euro to 3.70 euro.

Nevafilm’s Oleg Berezin book says that cinema market will go down from slump to depression by 2020.
The new upcycle is on the way and Russian market will be ready with new content for new audience.

And with that the four presentations ended and we moved to the Q&A part, which I moderated from stage, so I was unable to take notes. Questions were about decline of youth attendance, which Ian took on, saying that the trends were not just pointing downwards and this was not naive optimism but based on research and data.

In conclusion, for a medium that is under assault (or at least competition) from all the other technologies on show at the rest of the IBC show, cinema seems to be standing its ground pretty well. Though, as always, there is little room for complacency.

And with that ended the IBC 2015 Big Screen conference strand.