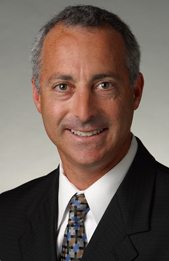 Christie Digital wowed the audience at CinemaCon 2015 when their laser projector, developed jointly with Dolby, which was used to screen the high dynamic range (HDR) version of Pixar’s “Inside Out”. While Dolby got most of the attention, Christie has been quietly beavering away at several fronts, including immersive audio and lobby display.

CJ interviews Craig Sholder,Executive Vice President, Business Development and Strategic Planning at Christie, who details his vision for where the company is going.

Celluloid Junkie – The most talked about event of CinemaCon 2015 was undoubtedly the HDR demonstration and screening of Pixar’s “Inside Out” in Dolby Cinema, using Dolby Vision incorporated into Christie 6P laser projectors. Can you tell us more about how the “co-development” partnership and technology exchange between Dolby and Christie works and how you see it going forward?

Craig Sholder – Most of the terms of our agreement with Dolby are confidential but I can say that it is a true development partnership and our two firms developed the solution together. While it is based on the exact, same 6P laser technology that we use in our Christie CP42LH (Cinema) projectors, the big difference are the special, high-performance, high-dynamic range (HDR) projection heads, built to Dolby’s specifications and manufactured by Christie. This makes Christie the only projector manufacturer in the world that has true HDR projection technology for cinema applications.

(Note that, anchored by the Christie Freedom laser illumination system, Christie has a range of laser projectors for various industries, including cinema. Besides the Christie CP42LH (Cinema) projector, Christie is selling the Christie D4K60LH (ProVenue) and Christie Mirage 4KLH (Immersive Environments) models, all of which have been field proven with key Christie customers in 2014/2015 in both publicly-announced and non-disclosed installations. By the way, the Christie Mirage 4KLH boasts an immersive 120Hz head and is therefore the only laser system capable of up to 4K resolution at 120Hz in a single projector.)

How do we see the partnership with Dolby going forward? Well, it is a long-term agreement and we will continue to support Dolby as it deploys the solution globally. Most recently, this has been at the El Capitan Theatre in Los Angeles and in numerous AMC Prime locations, as per the announcement April 9 this year. This is the highest-quality cinema experience available and we expect many more installations across the world, in partnership with multiple premium exhibition chains.

CJ – How is that similar or different from what you are doing with Christie Vive Audio, which can be used for both Dolby Atmos and Barco AuroMax?

Craig Sholder – Similar to other cinema speaker companies, our goal is to manufacture products that reproduce the audio specifications and performance requirements as outlined by SMPTE and AES.  For Christie Vive, we believe the differences in achieving these objectives is in our R&D efforts to create a new paradigm shift from compression driver, horn-based products to planar ribbon driver/line array solutions. For the planar ribbon drivers, we designed them as direct radiators which yield a cleaner, more impactful audio experience. As for the line arrays, Christie has implemented them as an articulated, single line array enclosure, which achieves a more controlled and predictable coverage pattern within an auditorium. These characteristics of Christie Vive are beneficial for the system design configuration of both Dolby Atmos and Barco AuroMax in terms of improved coverage with less speakers, and timbre matching between screen channel, wall surround, and ceiling surround.

With the unique articulate single enclosure line array options for screen channels, wall and ceiling surrounds, we can accurately reproduce the coverage pattern to ensure sound is reaching the seats and not the reflecting off the floor, wall, or ceilings.  In addition, by using the same planar ribbon drivers as the building blocks for screen channels, wall and ceiling surrounds, we provide an unparalleled acoustical benefit of timbre matching (tonal quality) between speakers, whether from screen channel, wall or ceiling surrounds.  For the immersive impact that Dolby Atmos and Barco AuroMax wish to achieve, the Christie Vive solution achieves theirs objectives, and provides an improved movie experience for cinema patrons.

Our approach is working and at the current pace, Christie anticipates a 100 percent increase in Christie Vive locations, with up to 300 auditoriums pumping out rich, dynamic, detailed cinema audio by the first quarter of 2016.

CJ – Coming back to lasers, both NEC and now also Barco have unveiled projectors or plans for blue laser/phosphor as a lower-cost entry for exhibitors into the laser projection. What is Christie’s take on this field?

Craig Sholder – Christie introduced its GS Series of blue laser phosphor illuminated projectors last year and with its low cost of ownership and 20,000 hours of operation, the GS Series is perfect for theme parks, live event theaters, casinos and other location based entertainment venues, including theater-type environments.  Christie’s ongoing commitment to laser is second-to-none and for cinema exhibitors, Christie believes 3P and 6P RGB laser is the best way to go.”  Our laser projection strategy was announced at NAB and is proceeding well, across industries.

CJ – Are you seeing a strong interest in a variety of laser projection solutions for cinemas’ own-brand premium large format (PLF) auditoriums?

Craig Sholder – Yes, there’s a lot of interest and Christie is dealing with inquiries on a weekly basis from cinemas planning for their own, branded PLF venues. But the reality is that there will still be significant cost reductions required for the equipment to achieve the potential, mass-market rollout that the industry is expecting. High-end laser projection technology has yet to achieve the production ‘economies of scale’ to compete with Xenon-lamp based projection. To be clear, don’t expect laser projection at every theatre near you anytime soon, but I can also promise that you will be in for a great experience if you can find one with a Christie or Dolby Vision laser system installed.

CJ – Looking at lobby displays, Christie has long been active in this field with signage, flat panels and MicroTiles but it now seems like a more concerted effort recently with the Screenvision strategic partnership, the Christie Experiential Network (CEN) and the Christie 360. Is this something exhibitors are asking for?

Craig Sholder – Definitely. Exhibitors are becoming more aware of the technology missing from their lobbies as a result of advances in DOOH offerings in malls, arenas, educational venues and transit. Christie has a history of supplying these other industries with DOOH offerings, and has the awards to show for it. So it became very apparent that exhibition has fallen way behind, and that firms like Christie and Screenvision can help exhibitors use technology to drive sales.

CJ – Is there a possibility that Christie will extend the ‘Street-to-screen’ concept further with products like motion seats or panoramic displays if there is a clear market demand?

Craig Sholder – If there is a clear path to market for the monetization of products like motion seats or panoramic displays in a repeatable and scalable way, Christie will include these offerings in the CEN media mix.  When there is news on this front, Christie will publicly announce it.

CJ – Which international markets do you see as being most significant in terms of new builds and installs and how do you see the replacement market in more mature cinema territories coming to the end of their VPFs?

Craig Sholder – Certainly, China and Latin America stand out as being the two international markets for new builds and installs. China will lead, as it has a government mandate for cinemas to digitize, and there are government financial incentives in place to do so. Latin America is still ‘under screened,’ in the sense that a quarter of its screens remain film-only, but there are few government financial support programs to digitize, so the process will be slower.

CJ – While it is a niche, can you tell us how developments are going with D3D for laser dome solutions?

We have a good relationship with D3D, and there is a lot of interest from prospects and customers. We hope to have a comprehensive update later this summer, and will ‘press release’ the news at that time.

CJ – Finally, CineEurope is only a week away; what should attendees expect there from Christie Digital?

Craig Sholder – Christie will be focusing on in-depth, in-person meetings between its executive, product management and sales force and its customer and prospect constituencies. As part of the ICTA Seminar Series pre-show, on Saturday June 20, Christie’s Chris Connett, Market Development Manager, Vive Audio (EMEA) will be on a panel devoted to the learning curve necessary for immersive audio. Chris is particularly well-suited to address exhibitor questions, given his 16 years’ experience within the cinema industry at Dolby — working in a variety of capacities including test engineer, application support and latterly EMEA Sales Manager Cinema Products — before joining Christie in January.

CJ – Thank you for taking the time to share your insights.