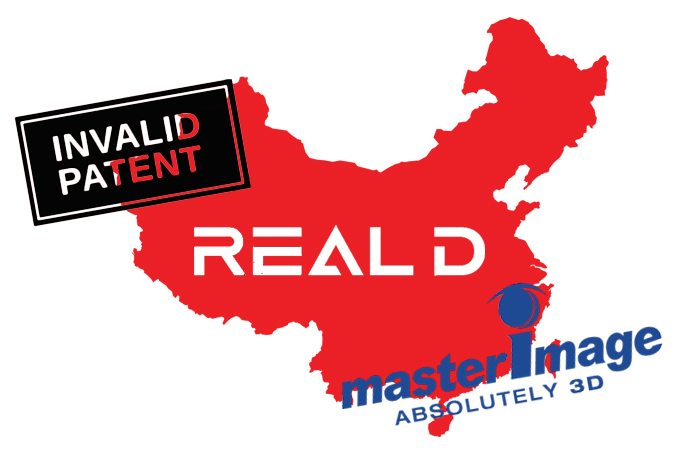 MasterImage has managed to invalidate RealD’s utility model patent for its “light-doubler” technology in China, just over a month after it did the same in Russia. With China having overtaken the US as the world’s biggest 3D cinema market, this is a significant development, though cheap domestic manufacturers could end up being the biggest beneficiaries.

MasterImage had filed an appeal with China’s Patent Re-examination Board (PRB). The PRB found in MasterImage’s favour that RealD’s  CN 203433207U patent for 3D beam-splitting, polarization technologies “lacked inventiveness and failed to meet the requirements for patent protection.” The ruling means that MasterImage 3D can continue selling its own “light-doubling” high-brightness Horizon3D product line the Mainland.

Though MasterImage had not put a hold on selling its products while the case was being considered by the PRB, the decision removes uncertainty any client might have had in adopting MasterImage’s solution. The ruling was made on the 7th of May.  The time between the ruling and the press release was likely, as before, taken up by translation and legal vetting of the decision.

While China is currently a bigger cinema market for 3D films than North America, the decision could end up benefitting domestic manufacturers of 3D beam-splitting and polarisation equipment that have been much less scrupulous than MasterImage when it comes to appropriating 3D cinema technologies.

However, the back-to-back rulings in Russia and China mean that RealD has much less chance of defending their patents in markets such as Europe, the Middle East, as well as North and Latin America, where many of its contracts will be up for renewal from 2016 onwards.

The question now is what will happen to RealD’s patent in its home territory. MasterImage’s attempt to invalidate RealD’s US patent 8220934 (“Polarization conversion systems for stereoscopic projection”) and US7857455 (which combines P and S rays for bright stereoscopic projection) have both been accepted for trial as of the 12th of March, according to the USPTO website.

The significance of the USPTO accepting this challenge is explained on the USPTO website, in that “An inter partes review may be instituted upon a showing that there is a reasonable likelihood that the petitioner would prevail with respect to at least one claim challenged.” While this does not amount to an automatic victory for MasterImage in the US, it means that RealD’s lawyers will have to work that much harder in the six to twelve months this challenge is likely to last. RealD lawyers did manage to deny an inter-partes review related to the patent 7,857,455 B2 on 13 April, though this is an old Colorlink patent that is considered less pertinent to MasterImage’s case than the previous two.

RealD’s share price has recovered from a low in late January of USD $10.22, trading at USD $12.55 at the close of market on the 18th May, having gone as high as USD $13.42 in late February. There are speculations that the company may be de-listed prior to any ruling on its US patent, to better allow it to operate in case the patent is invalidated there too, particularly during the critical re-negotiation period with major US exhibitor clients.

Interestingly some industry insiders have pointed to Travis Reid as a possible replacement for RealD’s Joe Peixoto, who stepped down last year without a replacement, with Reid having left Screenvision last Friday for “a new career in California.” With his significant exhibitor relations and experience, Reid would be ideally placed to re-negotiate RealD’s contracts.

MasterImage currently has a supply deal with China Film Equipment for supplying China’s premium cinema market. Meanwhile, RealD has a deal with Wanda Cinemas for over 1,000 screens, which is very unlikely to be affected as a result of the ruling.