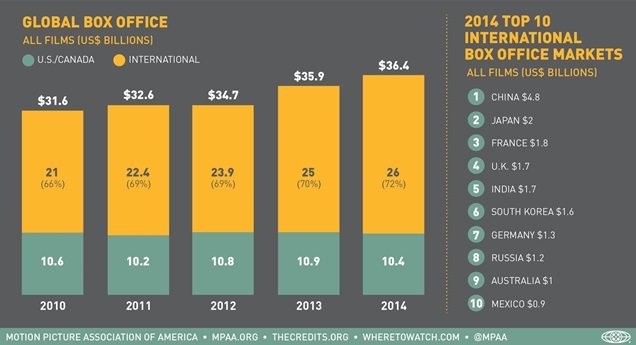 The Motion Picture Association of America (MPAA) has released its 2014 Theatrical Market Statistics report, providing an overview of global box office and trends. Overall box office grew year-on-year by just 1% but to a record USD $36.4 billion. However, the underlying trends point to a surging Asia coming to the rescue of the stagnating North American and plateauing European markets.

In 2014 box office in North America (US and Canada) was down by 5% to USD $10.4 billion, with admissions down even more by 6% to 1.27 billion. Ticket price rise was just 1% (or USD $0.04), which was below the rate of inflation, possibly abetted by 3D box office being down 2% from the previous year to 14% of the total box office. Significantly, films released by MPAA members (i.e. the big Hollywood studios) increased for the first time in five years to 136 titles, though non-MPAA films were also up.

In interesting demographic trends the proportion of tickets sold to older patrons (40-49 and 50-59 year olds) were at an all time high, while tickets bought by those 60+ year olds (13%) were the highest they’ve been since 2011. But while there is a distinct ‘greying’ of the North american cinema population, MPAA still notes that demographics remained stable for 2013 to 2014, with “12-17, 18-24 year olds and Hispanics especially continuing to oversample in tickets sold versus their proportion of the population.” However, there was a troubling collapse in movie going by the youngest demographics.

While the situation in Europe was not quite as bad, overall box office fell by 3% for the Europe, Middle East & Africa (EMEA) market as a whole. This was mainly down to a decline in major markets such as Germany (-7%) and the UK (-5%), that were not significantly enough offset by slight growth in territories such as France and growth attributable to many new screens in Eastern Europe, Turkey and the Gulf & Middle East.

Despite this slump, EMEA came out slightly ahead of North America with USD $10.6 billion versus USD $10.4 billion. This means that EMEA has outperformed or equalled the North American market for three of the last five years. With strong growth in Eastern Europe and the Middle East in the coming years, North America could see itself permanently relegated to third place in the global box office ranking in the future, though the currently weakening euro will not help. 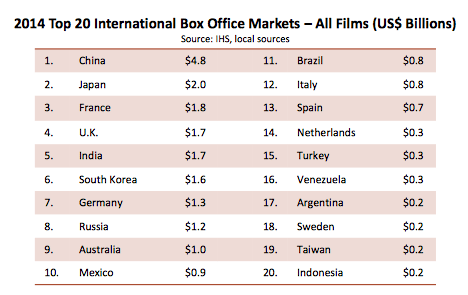 Latin America had a 2% growth, but this represented just USD $60 million. With the total BO market for the whole of Latin America worth just USD $3bn, it accounts for less than one tenth of the global market.

It is interesting to note, though, that Latin America and Asia have had exactly the same total growth in the last five years at 46%. Overall international box office share is up from 66% in 2010 to 72% in 2014 and is likely to account for 3/4 of all box office within two to three years.

Yet it is Asia that is now the engine of global box office growth, with China leading the way, though other markets also important to understand the bigger picture. Asia Pacific growth in 2014 was a staggering 12%, with box office in China alone growing 34% to USD $4.8 billion – meaning that it alone is worth as much as all of Latin America more than 1.5 times over.

AsiaPac/China was also largely responsible for total global screen growth of 6% in 2014, with AsiaPac’s stand-alone figure of 15%. Screen count which now stands at 142,000 world-wide, with 90% of all screens estimated to be digital (MPAA quoting IHS figures on this).

Looking beyond the headline grabbing growth of China (“first international market to exceed $4bn in box office”, as Screen International salivates), it is worth highlighting just how much the international (i.e. non-US) market has pivoted from Europe to Asia.

It is clear that the picture is one of overall tilting towards Asia, though it will be some time before even the combined Asia-Pacific and Latin American markets will match the combined size of North America and EMEA. MPAA’s Chris Dodd is quoted as saying:

“This is not just an American story of success, but a worldwide story about the value of craft, creativity and the importance of a story well told. We tell stories that transcend borders and transform individual experiences into shared ones. 2014 was a strong year, and 2015 is starting out tremendously, with box office in the US/Canada up 11 percent in the first two months of this year.”

Although a 5% domestic decline is perhaps not everyone’s definition of a “story of success,” it is clear that it is still American/Hollywood content that is driving box office revenue on a global scale. And in case you’ve already forgotten, the MPAA will happily remind you of just how much cheaper it is to go see a movie* than to attend a theme park or watch a major sporting game live. For this an other insights, you can download a PDF of the full report from the MPAA website here.

Of the trades, THR’s Pamela McClintock offers the best instant analysis on the data, highlighting “Box Office: Five Worrisome Moviegoing Trends in 2014” for North America, including the 32% of Americans who ‘never’ go to the cinema, a steep fall-off in the 2-11 age group, a shrinkage in the Gen X, Y and Zs cinema attendance, 3D burnout and gender imbalance (in favour of female movie goers). 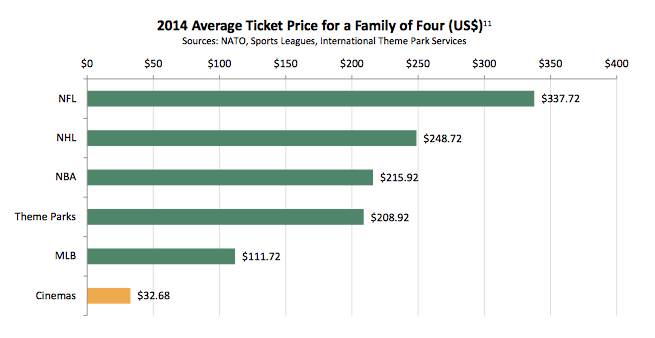 (*cost of popcorn, soda and babysitter not included, add on 50% for concession spend as a rule of thumb.)