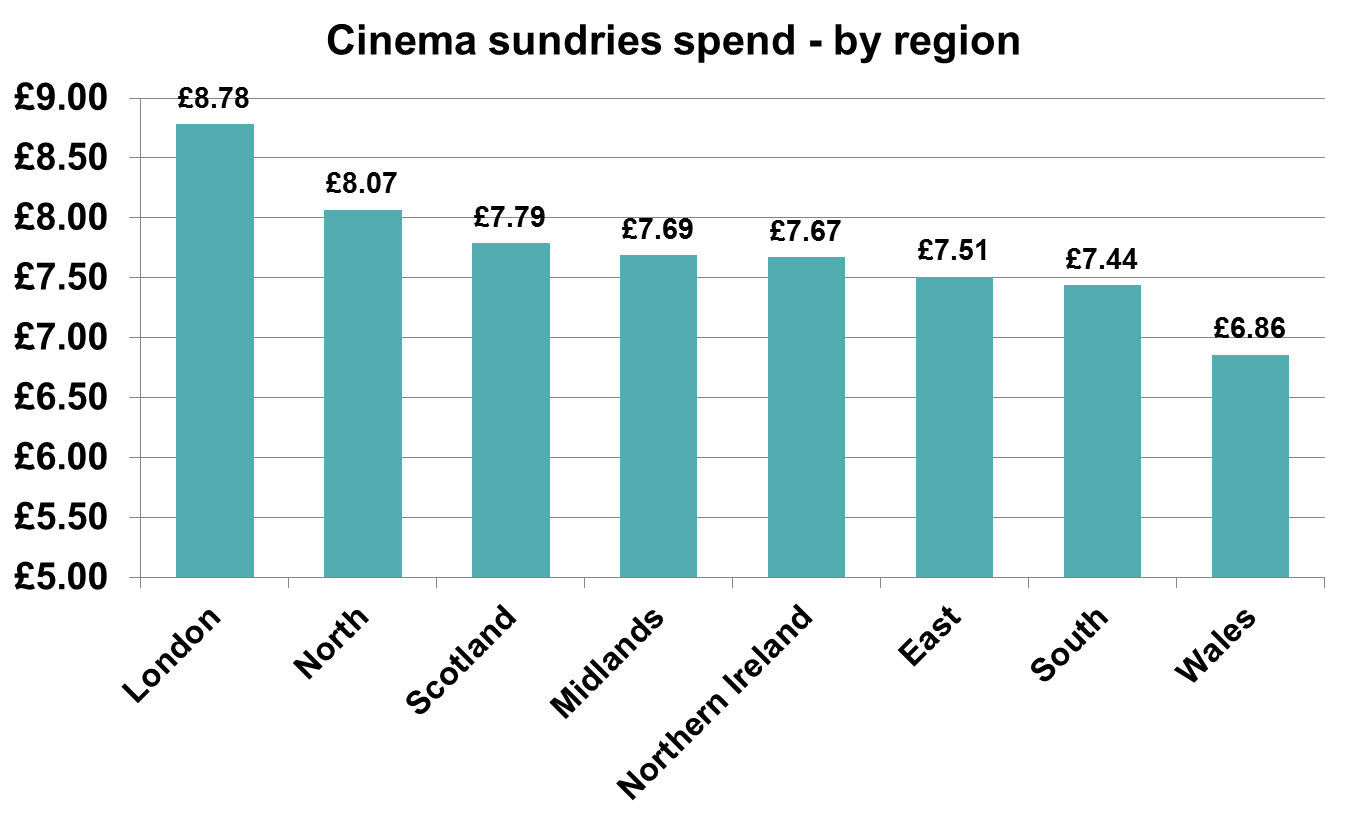 British polling company YouGov has published a report that details the spending patterns and intentions of UK cinema goers. The findings reveal regional variations and an overall positive outlook, though cost is a factor in some people choosing not to frequent the cinema.

YouGov’s Film and Cinema Evaluation report profiles individual cinema spending above and beyond the cost of the cinema tickets themselves. As well as covering obvious extras such as concessions and drinks, but also related required spending on ‘sundries’ such as parking (and babysitting?).

Perhaps not surprisingly the highest spending is in the capital, given that London has the most expensive cinemas as well as related real estate, parking, etc. Total spend is GBP £8.78 per head per visit in London, while the traditionally poor region of Wales has the lowest spend at GBP £6.86.

The study further broke down spending into categories based on frequency of cinema going.

The study assesses who is going to the cinema and with whom, when and where people go, what they watch and why and how much they spend. It also analyses how people find out about new films why they choose to watch what they do, what genres and actors different groups are interested in and how cinemagoers’ profiles vary film by film. YouGov spoke to over 5,000 people in the UK aged 16+ for the research.

YouGov found that not only do men (£8.29) spend more than women (£7.39), but that people who visit the cinema more frequently, typically spend more on items other than tickets (e.g. popcorn, drinks, etc.). “Heavy” cinema users have the largest outlay on sundries, spending an average of £9.15, compared to £8.02 for “medium” users and £7.04 for “light” users.

Perhaps not surprisingly “Heavy” users are more likely to be found in London, again either because London offers greater choice of cinema and films or because people who want a wide cinematic choice gravitate towards the capital.

Cinema patrons with children are more likely to spend a great amount on extras – and anyone who has gone to the cinema with children will know already. People with three children spend close to £12 per visit (GBP £11.96 to be precise). 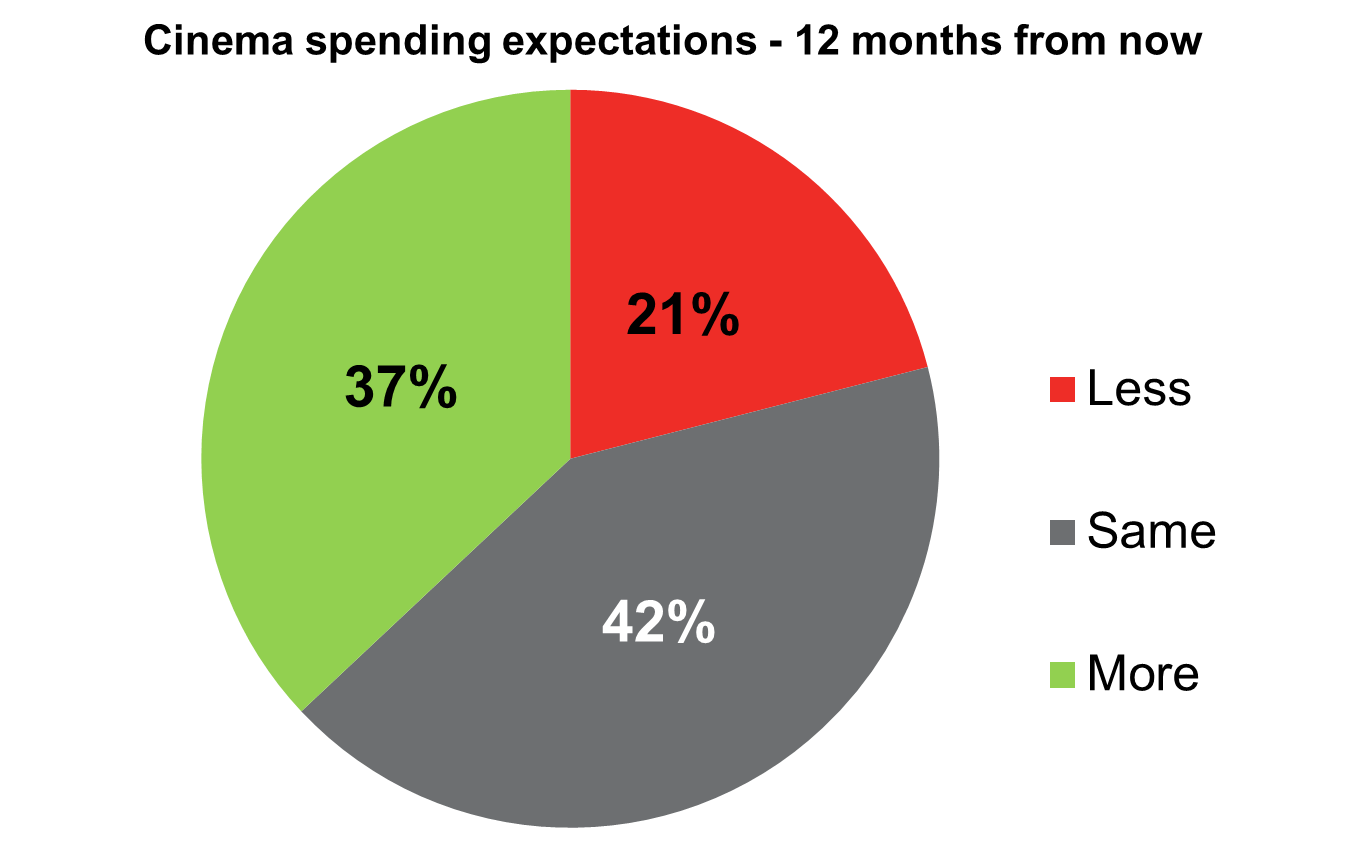 Perhaps more important and less obvious is what the report has to say about cinema going intentions in this coming year:

After a year of falling cinema attendances, the report finds that the decline may be arrested over the coming year, and this is corroborated by data from YouGov’s Household Economic Activity Tracker (HEAT). 37% of the nationally representative sample say they will be spending more on ‘going to the cinema’ 12 months from now, whilst just 21% say they will be spending less – a net increase of +16%. Furthermore, since October 2014 the HEAT data shows consecutive monthly increases of those saying they have visited the cinema in the last 30 days.

It would be interesting to know how closely this is tied to awareness of upcoming blockbuster films (“Fifty Shades of Grey”, “Bond: Spectre”, “Star Wars VII” etc.). However, there is a significant proportion of the population that has little or no intention of going to the cinema and price is a significant factor.

Among those who do not go to the pictures, the cost of a trip to see a film is – by some distance – the main reason they stay away from the cinema (46%). The rise of on-demand home cinema would suggest why three in ten people (30%) prefer to watch movies from the comfort of their own home. The other main reasons – lack of interest in the movies on show (21%) and films in general (16%), and general apathy to cinema (14%) – all trail in even further behind.

Vidisha Gaglani, Associate Director of Digital, Media, and Technology at YouGov says: ‘Over the past decade cinema has been challenged on a number of fronts. Piracy and torrents of new movies are rife, television has arguably never laid down such a cinematic challenge, and squeezed film financing has led to more sequels and arguably less variety.

‘While cost keeps many people away from the pictures, it should be remembered that people go to the cinema because of the experience as much as they do because it is a practical way to see a film.”

So overall these findings should be encouraging news for exhibitors and concession suppliers. However, with the economy in the UK still slow to recover from the longest recession in living memory, discretionary spending should never be taken for granted.

As The Telegraph comments:

The survival of cinema in the 21st century would surprise the futurologists of 1967, when colour television came in and film audience graphs were heading for zero by 1980. Today, when the average Briton sees three films a year, cinemas hope to make more out of hot dogs than Hobbits.

Yet the newspaper also expresses hope that we have reached “peak popcorn” in terms of costs.