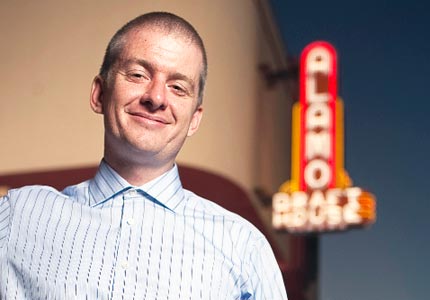 Alamo Drafthouse is the premier up-market cinema chain in the United States. Yet it is sometimes better known for its ‘zero tolerance’ approach to people using cellphones, smartphones or even Google Glass in its cinemas.

Following the big response we had to the topic of smartphone use in cinemas (‘Smartphones Are Killing the Cinema Experience‘) we got in touch with Tim League, Alamo Drafthouse Cinemas’ founder and CEO to quiz him about the background and specifics of his chain policy and practices.

Celluloid Junkie: What was the origin of Alamo Drafthouse’s ‘zero tolerance’ towards cellphones, smartphones and wearable devices?

Tim League: For the first few weeks of operation back in 1997, we didn’t have a formal policy. About a month in, we had midnight screenings of “Blue Velvet” which sold out. We had a really cheap Pabst Blue Ribbon special that sold really well and we unfortunately had our first rowdy audience.

I went in the theater and it was out of control. People were chatting and shouting at the screen. I felt sick to my stomach. This wasn’t the theater that I wanted to build. That week I bought a copy of Final Cut Pro 1.0 and taught myself how to use it. I cut together our first Don’t Talk PSA and the zero-tolerance policy was born.

CJ: How was the policy formulated and what staff training was required to put it into practice?

TL:In the old days, I was there every day and I was the enforcer. When there was a complaint, I came in to sort the problem. These days, we have a good amount of training on how to deal with upset customers. We probably throw out 100 or so customers a year, but in general most people quiet down when they get their first warning.

CJ: Can you tell us about the ‘silent notification’ process?

If you have a loud table nearby, you just write down where they are sitting on paper supplied at the table. A server slinks in and takes the note and alerts the manager. A manager will stand in the theater until it happens again. When it does he or she will give the table a warning and tell them they will be thrown out without a refund if it happens again.

CJ: Once in place, how long did (or does) it take for the policy to take hold with regular cinema goers in your theatres?

TL: It is really fast. The most effective tool is our dual warnings at the beginning of each screening. We’re also getting to be known for it, so folks who must talk during movies find other options.

CJ: Have there been any unpleasant incidents as a result of this policy and would you ever involve the police or authorities?

CJ: The PSA (public service announcement) of the voicemail of the irate woman who was removed from a screening for using her phone [see above] has taken on a life of its own online. Was the success of that video a surprise to you?

TL: We knew it would be funny and our customers would like it. We didn’t anticipate just how widespread it would become. We were the #2 rated Anderson Cooper “ridiculist” story of the year when it first came out. We were on Howard Stern, The View, CNN, etc. What a crazy week. For a while and maybe to this day, more people know about the “angry texter” than know about the Alamo Drafthouse.

CJ: You have also made other terrific ‘switch off your cellphone’ videos, such as the great one with Ethan Hawke and Julie Delpy [see above]. Was it easy to convince them to participate and do creatives feel strongly about protecting the cinema experience?

TL: Most directors and stars are very much in line with our stance on zero-tolerance for talking and texting. They spend years of their lives creative stories for us to enjoy. The very least we can do is shut down our devices and respectfully give them our attention for 90 minutes. Movies are not a multi-tasking experience. They should be completely immersive.

CJ: You also famously banned Madonna from your cinemas. Has she apologized yet?

TL: There has been no movement on the Madonna front, but we remain hopeful.

CJ: Not every cinema can be an Alamo Drafthouse, but are there lessons or a message for the wider exhibition community when it comes to having a strong and workable smartphone policy in place?

TL: I don’t want to tackle this fight alone. I want every single exhibitor in America to have the same stance we do. It is our collective job to make going to the movies an awesome experience. When I talk to people, the number one reason why they don’t go to the cinema anymore is the distraction of cellphones and people chatting during the movie. We should all combat that trend.

CJ: Finally, we take it you don’t have any plans to introduce ‘cinema barrage‘ screenings in Alamo Drafthouse cinemas?

TL: Personally, I don’t like the “barrage” concept. We have, however, experimented with something similar called “Hecklevision” with some pretty terrible movies. This sort of thing has zero place in the screening of quality films though. As a novelty event for bad movies, I think it is OK, but for me this sort of thing is quite outside the realm of “cinema.”