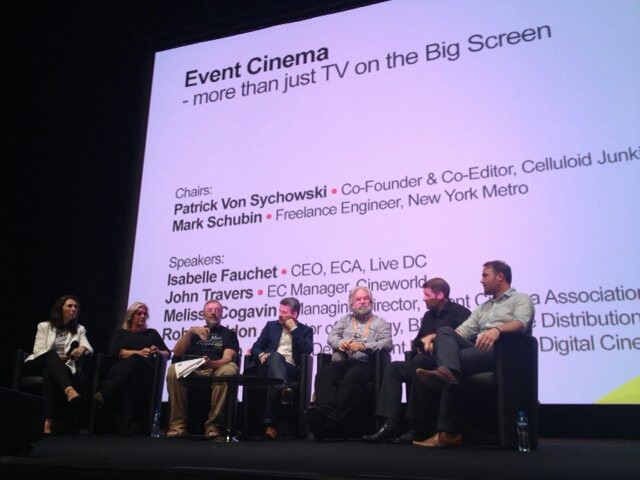 The burgeoning field of event cinema (nee ‘alternative content’) is highly topical for the IBC Big Screen Experience, as the larger IBC conference straddles the worlds of content produced, distributed and displayed for all size screens. In the interest of full disclosure, I was one of the co-producers for this session, though more credit should go to my co-producer Peter Wilson who did the greater job of assembling the crack team of speakers and practitioners.

The session was developed in close co-operation with the Event Cinema Association (ECA), which in the last 18-24 months has become a major force for the event cinema industry in terms of giving it a voice, focus and profile internationally. ECA has its own event on 16 October in London, so IBC was very fortunate that Peter and Melissa made time so close to their own big day.

The session is chaired by event cinema legend Mark Schubin (Schubin’s Cafe, USA), who has been the technical Wizard behind the curtains (actually in the OB van) of the Metropolitan Opera since its first live cinema transmission and also the world leading expert on the history of electronic opera (and its relation to baseball).

The session has several distinguished speakers, lots of content and (of course) barely enough time to do it all ful justice, despite Schubin doing a great job of keeping everyone to their time. Please pardon spelling errors as I’m doing tripple duty of reporting, tweeting and floor managing at the same time.

The session was opened by Melissa Cogavin (nee Keeping, Managing Director, Event Cinema Association, UK) who played the event cinema trailer that showcased the range and depth of what’s been in cinemas in the last 12 months: ‘Your Cinema – Event Cinema’. She began by asking what “alternative is, givent that event cinema was previously known as ‘alternative content’.’  She noted that 1,500 cinemas showed Doctor Who and grossed over GBP 10 million. “Event cinema is the fastest growing category at the box office. It is headed for being a billion dollar business,” she said. “For something considered ‘alterntive’ that’s pretty amazing.” She talked about ‘demystifying’ the process, to which end they (ECA) are publishing the technical handbook this autumn.

Mark Schubin (EIC, US) introduces the session and himself as the freelance technician for the only event cinema transmission to have screened on all seven continent (yes, the Met Oper has been shown even in Antarctica). Interstingly, they have to provide exit lighting for ten minutes after the conclusion of the opera, as projectionits don’t know when the opera will end. This was only one of the ways that event cinema is more than television on the big screen, Schubin noted. As always, he also teased with some great historical nuggets about the Met and event cinema, which goes back further than most people probably realise.

Peter Wilson (High Definition and Digital Cinema Ltd., UK) provides a detailed technical overview of all the technical considerations involved in producing (good) event cinema. Everything from black level variations from scene to scene, subtitles in many languages, and 5.1 audio being the maximum audio presentation for television but the minimum for cinema. Here is another learning: “Rodents like cables, so there’s no point finding that out five minutes before the transmission.” These and other learnings will be included in the technical document to be published by the ECA this autumn. “Someone somewhere needs to have the final authority for the show – and that means having a loud voice,” he concluded. His loud voice definitely helped making this session a success.

He presented one of the most succesfull one-off special live event (as opposed to regular seasons like Met Opera and NT Live) with the Doctor Who 50th anniversary special. Interestingly the first ever Doctor Who screened same week as President Kennedy was killed and was largely forgotten until the BBC was persuaded to re-screen it the following week. The rest is history.

The November 23 event was shown in 98 countries simulcast, 15 languages, 1559 cinemas, 650,000 tickets sold. 22 different versions across 2D and 3D, 15 for cinema alone. He provided detailed overview of multi-platform package and delivery, highlighting the complexity of creating a truly global event, not least the importance of security and billing for an event “to all customers across television and theatrical at the same time.”

Marketing material and posters were an additionl set of requirement and not something that BBC normally does, as was the issue of getting classification for cinema release. Content security was as paramount as with any Hollywood blockbuster. Showrunner Steven Moffat sent letter that “you are part of an entertainment army” to create the build up for each cinema site. There was finally the Live Event where 4,000 people atteneded and saw the program in just one arena.

“Simultaneous multi-platform releases really are possible,” was Bolden’s message, but “Choose your title carefully,” was his concluding remarks before he screened an excerpt from the new Doctor Who season premier ‘Deep Breath’.

Isabelle Fauchet  (CEO ECA, Live Digital Cinema, France) kicked off by observing that “Big brands is what drives the market at the moment. Cinemas are learning new way of doing things. Interesting times.” She went on to outline the role of the distributors, which range from responsibility for the budgets to liase with the production company or even chosse the production company. “Having your network of cinemas is wonderful,” she noted, “but that’s only half the job done.”

Fauchet has really been on the cutting edge of the industry, having done the first ever live event cinema transmission from Russia. 2-3 satellite platforms were reqired to deliver to 800-1,000 sites world wide. (Personal observation: event cinema really doesn’t get enough credit and recognitio in broadcast circle for being as globally complex as the biggest of sporting events.) The most common live issues: 90% of issues come from domestic receivers (in cinemas). “Tweets are fantastically useful, even though we didn’t plan on using them that way,” she revelaed in talking about support issues. She ended with a thanks to Arqiva and showed a clip from La Bayadere ballet.

John Travers (EC Manager, Cineworld, UK) talked about the growth in the event cinema market and what Cineworld has done. Event cinema grew by 200% from 2012 to 2013 from GBP 1.57 million to 4.48 million for Cineworld – and there is more growth yet to come. Start of  2012 Cineworld had a satellite dish on the roof of each cinema, giving it a market of over 55,000 seats.

Key is audience access and shared experience. He said that inevitably because many of these are one-offs there is limited marketing resources and big name(s) or brand helps – as shown by Doctor Who and Monty Python. “Even though Doctor Who: Deep Breath was not in 3D and also available for free the same time on television, audiences told us that they watched it in cinema for the shared experience.”

Travers highlighted the substantial increase in revenue in traditionally quieter Mon-Thur period, which is why one-off events break into box office top on those days. Cineworld is also developing bundled packages for increased revene. “The inital challenge was finding any event, now we have to chose which of more than one events on the same night.’ He stressed that persuading managers of individual cinemas to buy into events, which is reflected in the box office takings as “local marketing and support is key to success.”

Key challenges and opportunities are to provide access to audiences of all ages, as a way of atracting older audiences back to cinemas, not just for event cinema but then also for films. On the other end of the age spectrum, Cineworld stages education events for younger audiences. One examples was Private Peaceful Day which for GBP 3.50 screened a World War 1 related film, experienced a live Q&A with the author of War Horse  and were also a given a copy of the book.

John Bullen (Content Development Manager, Sony Digital Cinema, UK) gave a short presentation of the first ever 4K live cinema distribution this summer of two games of the World Cup. It was shows at the Vue Westfield in London. Pulling this off required a complicated workflow of muliple partners, including Sony, dSat Cinema, Dolby, International Datacasting (IDC), Eutelsat, Ateme and Vue. Specialised Dolby E was required for this transmission, as Dolby Digital is the norm for cinema. “Plans are in place to create a setup for doing regular live 4K events.”

The speakers then re-assembled on stage to field questions from the audience via Twitter and roving microphones in the auditorium.

BBC’s Bolden talked about the importance of adding something different and special for the event cinema experience. It was agreed that audio and lighting remain challenges for live event cinema. Fauchet highlighted that lighting is done for stage and not for recording, with differences even showing up for television and th big screen. Sony’s Bullen emphasised that “you need to be committed to distribute for cinema.”  Bullen did a pitch for those interested to visit Sony’s facility to try out and learn more with hands on trials.

On the issue of time difference, Schubin revealed that the Met Opera has gone as early a 4am for the middle East and 7am for Alaska, though there are some territories like Australia, New Zealand, China and Singapore that are effectively excluded. Bolden says “time zones are major challenge to crack” and highlighted the issue of ‘cracking’ KDMs. “With social media talking such a big part of marketing,” BBC’s Bolden went on “you can’t avoid people not tweeting as they are watching he event around the world, so you need to ensure that everyone starts simultaneously.”

ECA’s Wilson stressed “that we need to work more closely with manufacturers to bring better quality 3D event cinema transmissions to the big screen. If we’re going to have another round of live 3D, let’s work together and agree to do it better.” In terms of educating audiences, Peter Wilson noted that he went to see the Vikings: Live at a cinema and it started on time but many people wandered in late.

“Adding a second screen ads another layer of interaction and gives another reason to go to cinema,” said BBC’s Bolden, pointing to Doctor Who and fan interaction via Twitter and social media. With that Mark Schubin wrapped the session.

Expect more of these issues to be aired, compared and discussed at the ECA event in London on 16 October.