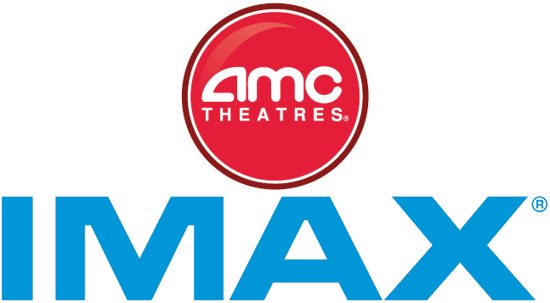 AMC and Imax have signed a deal to deepen their business ties. What this signifies is that AMC and Wanda Cinemas, while technically different companies (though with shared ownership) are increasingly becoming indistinguishable with regards to cinema business policies. I bet they even buy popcorn kernels from the same vendor, even if they don’t put out press releases about it.

IMAX Corporation IMAX, +2.03% (IMX) and AMC Entertainment Holdings, Inc. AMC, +1.43% today announced an expansion of the companies’ existing joint revenue sharing arrangement with the addition of 11 IMAX® theatres. The theatres, which will carry 13-year lease terms from the date of installation, are expected to be installed in 2015 in cities that include Chicago, New York, Newark and Phoenix. Today’s agreement brings AMC’s total IMAX commitment to 159 theatres and reinforces its position as the largest IMAX exhibitor in North America.  LINK

India’s much reviled Chief Censor has been indicted for corruption. You couldn’t make this up, but it highlights what a rotten mess Indian bureaucracy is when a ‘babu’ with a railway background (!) is put in charge of a body like the Central Board of Film Certification (CBFC). It is worth remembering what a let’s-clean-up-this-cinematic-filth-style moralist Kumar was when he was first appointed to the job.

The CBI arrested Central Board of Film Certification (CBFC) CEO Rakesh Kumar in an alleged bribery case on Monday.

Last week the CBI had registered a case against Kumar and also arrested an authorized censor agent and an advisory panel member of the CBFC for demanding a Rs 70,000 bribe on the behalf of the CEO to urgently clear a film from Chhattisgarh. 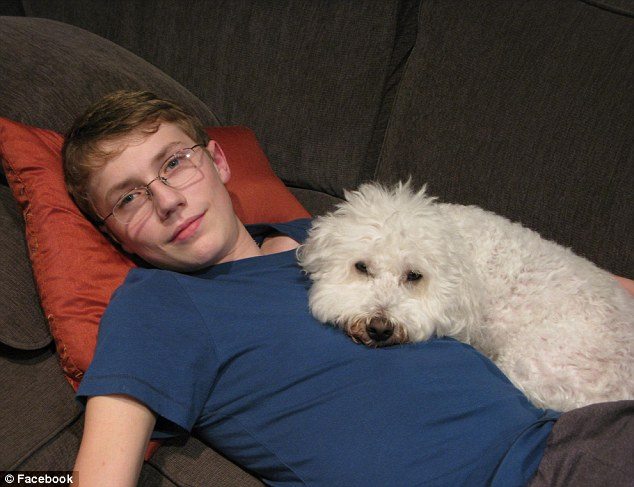 USA (NJ) – Diabetic kid refused entry to drive-in cinema for bringing along snacks to help control his blood sugar level. There are rules but then there is also plain stupidity.

Weidner was refused entry to the Vineland cinema, where his father had taken him and his friends for a fun night at the movies, because of the food items in his backpack.

‘No food. No drink. Bottom line,’ Dr DeLeonardis told WPVI. ‘Sorry your kid has an affliction but what can I tell you?’

Ben’s father Phil Weidner says DeLeonardis went too far in enforcing the rule with his son.

‘He needs to have items with him to handle low blood sugar. He’s got celiac, he’s got numerous food allergies. We are bringing these items in not because they are extra items to eat, but because they are for his own safety,’ he told WPVI.  LINK

Established in 2010, Evergrande Cinema Line is a wholly owned subsidiary of a Hong Kong ­­­listed company Evergrande Group, which is a conglomerate that focuses on residential property development and is engaged in FMCG, commercial, hotel, sports, and culture industries as a whole. The Group possesses close to 300 large scale projects across 147 major cities in China.  LINK

Kazakhstan – RealD has entered a new market in Central Asia.

Chaplin Cinemas is Kazakhstan’s fastest developing cinema circuit, with six cinemas across the country. With Kazakhstan’s economy growing, and box office revenue across Central and Eastern Europe projected to exceed $2 billion for the very first time in 2014, RealD is looking to capitalize on a rapidly growing market.  LINK 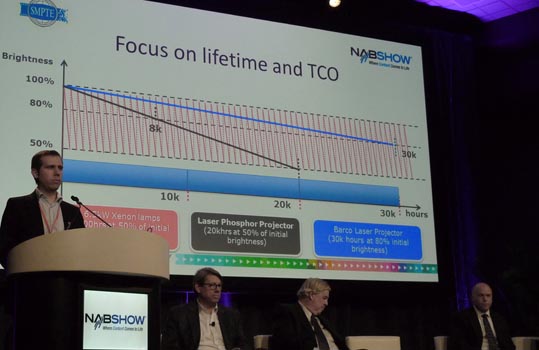 Lasers – Bill Mead provides a good overview of laser illumination for cinema projectors in this article for FJI.

Aside from market timing and their initial product offerings, all projector manufacturers seem to agree that the next generation of cinema projectors will use laser illumination, but are not convinced about the practicality of retrofitting existing Xenon-illuminated projectors with laser modules. Potential issues are the high cost of integrating into all the various modules, verifying performance, providing product support, and even the possible need for DCI recertification.

At CineEurope in June, the Italian projector company Cinemeccanica introduced their CineCloud Lux Smart laser retrofit solution for DLP Cinema projectors. The initial information describes it as a RGB fiber system that scales up to 55K lumens, with a 50% power reduction, and an estimated 20,000-hour lifetime. The Cinemeccanica development could be the first of others to follow, if an aftermarket retrofit solution can be proven to perform as well as a Xenon bulb but at a lower TCO for the exhibitor. Potentially reducing laser costs further, there are laser component manufacturers that are just realizing their customer base is expanding into cinema and high-brightness projector markets and are likely willing to jump in with new solutions and better pricing as the volume increases.  LINK 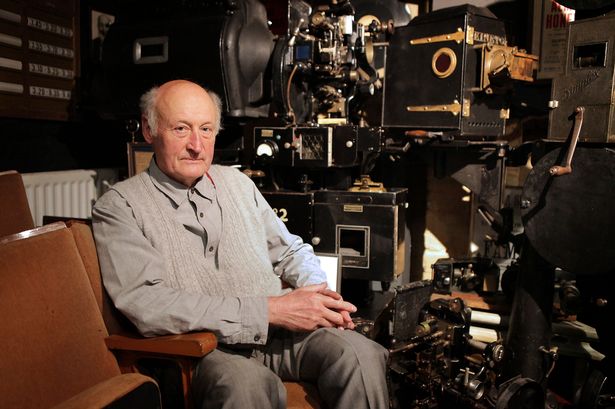 UK – Malcolm Plant (71) has kept the art and tradition of analogue projection alive in Liverpool and will be a guest of honour two new events there.

And yet one to be preserved with Malcolm’s help. He is one of many guests appearing at two events, at the Museum of Liverpool tomorrow and at WooltonCinema in October, celebrating the work of the Reel Heroes who made the silver screen shine in the city.

Both events are born out of a website project, Picture Palace, set up by Kim Ryan, to capture the magic of the picture palaces of Liverpool before they disappeared, along with all the stories, pictures and memories that go with them.

The aim was to cover the history of not only cinema, but the old picture houses in and around the city.

“There were once more than 100 in Liverpool, but now there’s only one, Woolton Picture House,” says Kim.  LINK 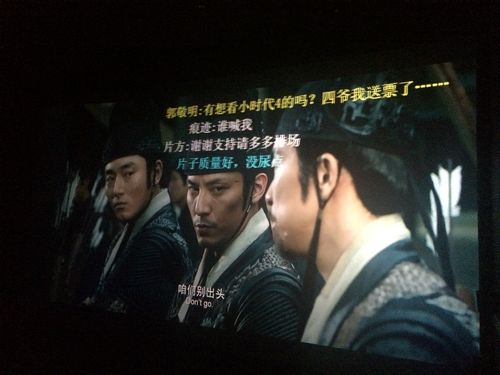 China – The Hollywood Reporter has woken up to the phenomenon of ‘barraging’ in Chinese cinemas, calling it “bullet screens”. We first wrote about it two weeks ago, but no harm in more information about this new craze.

Earlier this month, the Luxin cinema in Shandong province in northeast China tried the system with a screening of the domestic 3D animated movie The Legend of Qin, a TV adaptation that has taken $9.25 million in box office in China so far.

The manager, surnamed Zhang, said the theater was 90 percent occupied and that “bullet information” was sent by SMS at 0.1 yuan, around 10 cents, per message.

“People like it right now, as it’s a new thing,” he said. “In the long term, it might affect people’s concentration. We are trying to continue with some bullet screen activities and play some films that young people like. Time will tell.”  LINK 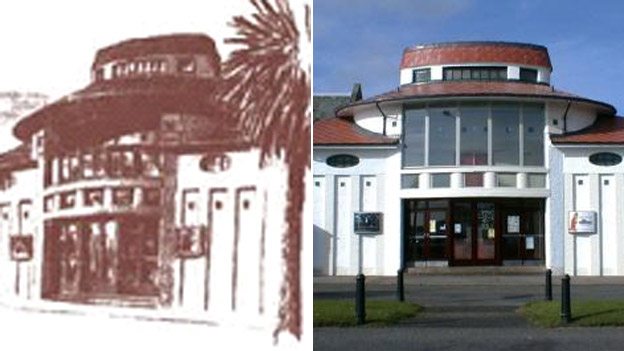 UK (Scotland) – One of Europe’s oldest purpose-built cinemas is set to shut. Let’s hope Rob Arthur & Co. can raise the funds to re-open it.

The Picture House, on the the banks of Campbeltown Loch, celebrated its centenary in May 2013.

Campbeltown Community Business, which owns and runs the A-listed art deco cinema, said the amount of improvement work needed meant it was unsustainable.

Efforts will continue to raise cash for the restoration of the building, which the company hopes to reopen in 2016.  LINK 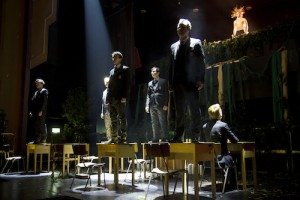 Secret Cinema raised GBP £11,000 (USD $18,300) for the mental health charity Mind – proof that cinema can be hip and a force for good at the same time. Initially it was only supposed to be a one-off at the Troxy cinema in London on August 15th, but it soon spread to other cinemas in the UK, Europe and USA. In Prague guests were asked to dress up in school uniforms.

Will Poole, events and compliance manager at the Troxy, explained how everything had to come together for the event in just three days. “A production meeting was held the morning before the event to agree the logistics and AV requirements,” he said. “The Secret Cinema team arrived on site at 8am on Friday, following which we had a 90 minute planning meeting to sign off the immersive experience and walked through the plan for the evening.

“The event recreated the tunnels in the basement with groups of 20 guests being taken down to attend the poetry readings by torchlight and culminated with the audience standing on chairs and desks at the key point at the end of the film. There was also a candle lit vigil to Robin Williams, which was signed off in agreement to our health and safety conditions.”  LINK